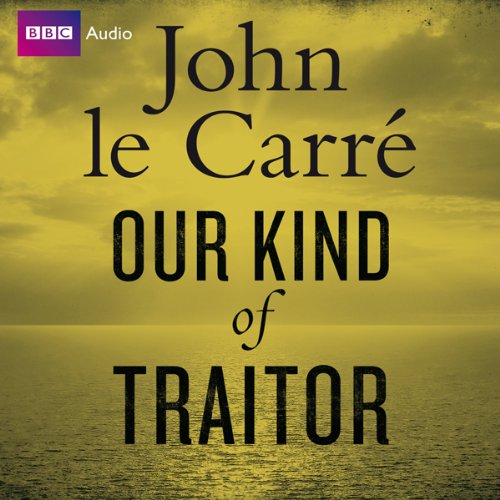 Our Kind of Traitor

Our Kind of Traitor

Britain is in the depths of recession. A left-leaning young Oxford academic and his barrister girlfriend take an off-peak holiday on the Caribbean island of Antigua. Seemingly by chance they bump into a Russian millionaire called Dima who owns a peninsula and a diamond-encrusted gold watch. He also has a tattoo on his right thumb, and wants a game of tennis.

But he wants something else too, something which propels the young lovers on a tortuous journey through Paris to a safe house in the Swiss Alps, to the murkiest cloisters of the City of London and its unholy alliance with Britain’s Intelligence Establishment. John le Carré reads his own taut, suspenseful tale of dirty money and dirtier politics.

What made the experience of listening to Our Kind of Traitor the most enjoyable?

The story in itself,and the author's magnificent reading voice and style.

What other book might you compare Our Kind of Traitor to and why?

Have you listened to any of John Le Carre’s other performances before? How does this one compare?

No, this is the first time.

I was impressed and enjoyed every minute of it. No laghter or tears: The genre is not suited to either emotion, but the humour is there,of course!

A splendid performance. Worth every penny.

I'm a great fan of John LeCarre's work, I normally buy the BBC dramatisations with the outstanding Simon Russell-Beale in the lead role. I was somewhat nervous about buying a narrated book, both abridged and read by the author but I needn?t have worried. The delivery, pace and length combine perfectly to produce an absorbing and impactful listen. I'd recommend this to any John LeCarre fan.

Another gripping story from Le Carre

This is another tale from Le Carre which expresses his anger at the way in which Government and politics is conducted, this time in respect of financial matters and its connection to the City of London (as opposed to counter terrorism and military engagement as in recent books). However, I couldn't help feeling that the ending was a little rushed, and did not match the pace of the book. Without wanting to give too much away, in my view the ending is also open to interpretation as to who was complicit and to what extent, which I quite enjoyed (though others may find it slightly unsatisfying).

The two protagonists, Gail and Perry, are quite well drawn, as are some of the secondary ones such as their main intelligence contact, Luke.

I enjoy Le Carre's narration despite the book being abridged, though I will probably listen to the unabridged version in due course.

Not suitable for listening to sleep

I think John wrote it as a screenplay so it's useless if you fall asleep. I can't tell where I am in the story or whose voice is supposed to be speaking.
I'm unlucky too. Watched a home recording of the TV show and was baffled at first then I discovered I'd failed to record 'part1' and had thought I was watching something familiar from almost the start.
Rating incomplete. I hope an edit is possible.

It is difficult to seperate the story from the story teller. It is such a complete package Excellent and believable story, wonderfully crafted with excellent narration.

Have you listened to any of John Le Carre’s other performances? How does this one compare?

I have listened to may Le Carre books and the narration has always been very good. This was is narrated by the master himself. not always a receipt for success, which adds a little something extra.

Given up on answering question as the keep changing. My answers now have no connection with the connected questions?To concude, i am bias as i love Le Carre and this book is no disappointment. I do not give 5 stars lightly but i could give no less for this super book.
On preview, question and answers now correlate!