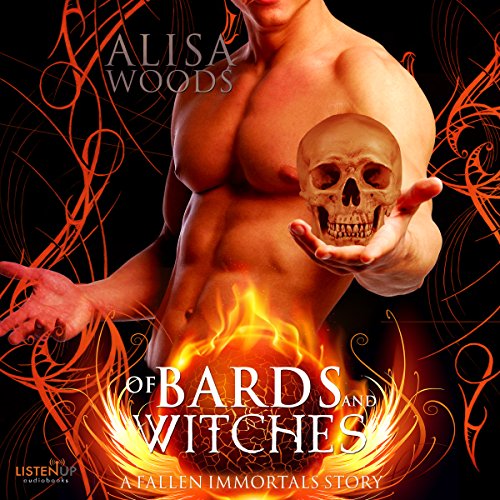 Of Bards and Witches

Of Bards and Witches

Leonidas is a dragon shifter, a century into his allotted five, and he's entranced by Master Shakespeare's theatre and the comely and lusty women of London's bankside. But when he finds a witch in the practice of her art in clear view of the stage, he must act, for dragons are the keepers of the peace between the mortal and immortal realms. But never has duty been so sweetly sexy and delicious to the touch as a witch whose very skin sparks pleasure.

He becomes lost in his bed, breaking his own cardinal rule; never seduce a woman for more than a night. As one pleasure drenched night bleeds into the next, he runs afoul of a danger he ought already know; never cross a witch.

Of Bards and Witches is a short, standalone backstory of Leonidas Smoke, prince of the House of Smoke, from the best-selling Fallen Immortals series.

It contains flaming HOT dragon shifters and sexy witches. Only listeners over 18 should partake of this delicious romp back in time.

What listeners say about Of Bards and Witches

Having listened to the whole of the Fallen Immortals story and gotten to know the three brothers so well it was interesting experiencing first hand what made Leonidas' personality the way it was. In this book what he did to deserve (or not) the curse put on him when he did not return the love of the young witch was revealed. Leonidas was so young, in dragon years that is, and not looking for a mate. He helped Maridie find a coven, he enabled her to use her magic and if she had accepted that he did not love her she could probably have lived a better life because of him. But she could not accept that although she loved him, he did not love her and the curse was made on her deathbed which totally changed the way Leonidas lived his life. I think I would have liked to have listened to this as a sort of prologue before book four in the Fallen Immortals series but then I loved the whole series so I didn't miss it. I know this was set in England and was before the Keep was moved to the US but I think I was so used to hearing Roger Wayne as Leonidas that it took some adjustment listening to Jeremy Arthur - that is not to take anything away from the narration, it was well done but it was different. I was given this book as a gift and am voluntarily writing my review.