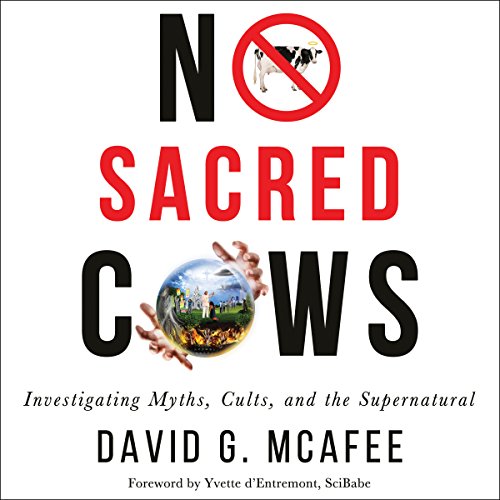 Taking the same anthropological approach he employed in his notable studies of religion, atheist author and activist David G. McAfee turns his attention to nonreligious faith-based claims. Whether going undercover as a medium, getting tested at Scientology headquarters in Los Angeles, or interviewing celebrity paranormalists and famous skeptics, he leaves no stone unturned in his investigation.

As in the case of religion, he finds an unwillingness among "believers" to critically examine their most closely held convictions. Only once individuals honestly assess their own sacred cows will they be able to ensure that their beliefs conform to the known facts - and that our decisions as a society are based on the best available evidence.

What listeners say about No Sacred Cows

Not thought provoking at all. Repetitive criticism that has little substance. I was hoping for some insightful treatments of the psychological mechanisms of belief systems and how they hold sway even in the face of unsupportive evidence. I didn't find that in this book.

Rational skeptics need to realize that the deniers and fringe believers in the supernatural, myths and the paranormal don’t care about meaningful discourse. The eight points of argumentation that Daniel Dennett advocates or the modified 10 points of Michael Shermer each itemized in this book are useless. As Nietzsche said "What the populace once learned to believe without reasons, who could— refute it to them by means of reasons?"

Our side needs to realize that the world is not fair. Our books have to be better than previous books that debunked these nutty beliefs and they have to teach us something we don’t already know. Our side wants to know the truth, and we care about reality. They don’t. There will always be crappy books like ‘The Boy Who Went to Heaven’, featured in this book. There’s a market for those nutty books and for those who want to believe without substantiation or reasons.

Life is not fair. Our side knows ‘climate change is real’ and is ‘not a Chinese Hoax’, vaccines work and don’t cause autism, when a neo-Nazi rams a car into a group of anti-Nazi protestors that it’s not true that both sides are equally to blame and it’s wrong for a leader to shout ‘lock her up’ before there’s a trial or to say an alleged terrorist deserves the death penalty the day of his capture. Tolerance is not a suicide pact. Our side does not have to show deference to those who want to undermine our relationship to reality based on only nut cases gut feelings void of logic, empirical facts, reason, rational thought or a non-nutty narrative tying their theory together. Fringe believers will always have a large market for their nutty beliefs because learning about reality is hard and for the nutty beliefs featured in this book one can always put a new even nuttier spin on them. ‘Fake news’ is what they call reality based journalism that doesn’t fit their nutty world view, and ‘alternative facts’ are for those who want to remain in the dark, and a necessary but not sufficient condition for democracy to thrive is the repudiation of the anti-science beliefs featured in this book.

I can’t really recommend this book. I’ve read ‘Skeptical Inquirer’ for years and there is almost nothing new in this book that hasn’t appeared in that magazine or I haven’t already read the Wikipedia entry debunking the myth. I realize that the five star reviews I’ve read on Amazon on this book are reasonable and all of the 1 or 2 star reviews didn’t like this book for different reasons from me. As for me, I think our side knows this stuff already (and there are better books on this topic then this book), and we already know Wikipedia exists, and the people who are living within the myth don’t know they are in a myth and will not even attempt to read this book and they have no interest in reasonable discourse. I’m not saying they aren’t reachable, their positions are so weak and they will ultimately yield to science and reason but they only do that to move the Overton window – the reshaping of the frame of the argument. Also, I find when dealing with paranormal fringe people the most effective argument is having them look things up on Wiki, or citing ‘Scientific American’ or ‘Science News’ and demonstrating to the deniers of reality’s lack of foundation and purposeful misunderstanding on the real nature of science.