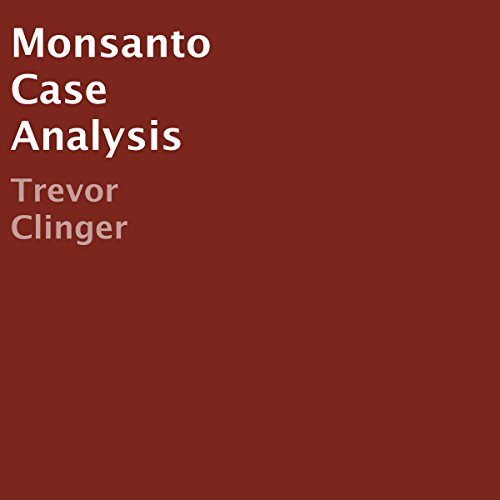 This essay serves as a great example of how to perform a case study; it also tackles myths and business practices surrounding Monsanto.

GMO's are bad? Feed the World with them!!

Clinger writes and narrates a paper about the Monsanto company, and how they, in spite of evidence saying that GMO's are bad, intends on using GMO's to feed the world and stave off world hunger and famine. It becomes clear that Clinger is on the side of Monsanto. Whether he is right or wrong I cannot say, the choice is up to you to decide. Either way, you can listen in and come to a decision in about ten minutes. I was not familiar with this company, and I am still not decided, but the book has made me decide to look into more.

As usual, Clinger is clear and clean in his narration. He delivers his point without any questions.

What disappointed you about Monsanto Case Analysis?

It has no objective data. It has no novel idea. In a nutshell Monsanto is a "good" "ethical" company that failed to make better advertisement of its awesome goofs I mean goods. Please give me my money back!

What could Trevor Clinger have done to make this a more enjoyable book for you?

Little. He is already firmly for Monsanto so there is no objectivity.

Who would you have cast as narrator instead of Trevor Clinger?

If you could play editor, what scene or scenes would you have cut from Monsanto Case Analysis?

This book should not be for sale.

Monsanto rules our food and I am surprised that the only book available is this weak audio book. In paper you have Marie Monique Robin, "The World According to Monsanto" for example. Is this lack of audio titles by design?

Somewhat monotonous, and failure to clearly recite the history of atrocities that Monsanto deemed "safe".

Would you ever listen to anything by Trevor Clinger again?

Would you be willing to try another one of Trevor Clinger’s performances?

depends on the subject matter

If you could play editor, what scene or scenes would you have cut from Monsanto Case Analysis?

Candidly, I would have much preferred a decade by decade recital of Monsanto products that were anything, but safe. Then a more scientific approach to discussing GMO's and then a discussion about the lawsuits against farmer's who had there crops "contaminated" by Monsanto seeds (thereby losing their "organic crop" designation) and then being sued by Monsanto just because the seeds desalinated to their farms from nearby farms.