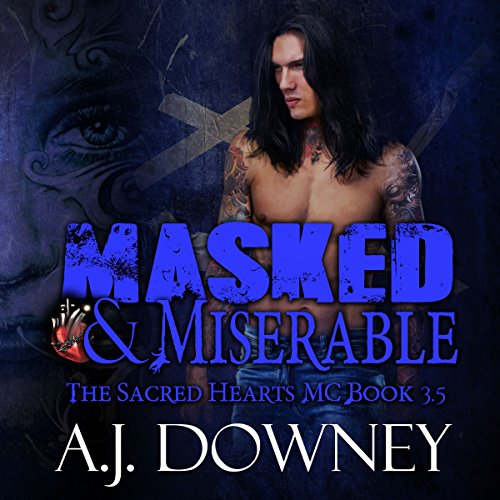 By: A. J. Downey
Narrated by: Jackson Hunter
Free with 30-day trial

Squick has been a longtime fixture of the Sacred Hearts MC. His boss, Trigger, is their Sergeant at Arms after all. It took a while for him to put together a bike to become an official hang-around then prospect, and he was pretty thrilled that his other boss, Zander, took the plunge with him. Still, Squick is hiding something big that could test friendships and destroy relationships. The mask is becoming increasingly difficult for him to wear.

Of course, now that he is on the very cusp of patching in, that's when Aaron walks into his life. Suddenly it's do or die.... Come out to the club and lose the brotherhood and the only sense of true family he has ever known, or don't and lose them anyway when they find out about Aaron? Squick doesn't see a third option, and the deeper he gets into his situation, the more his misery compounds.

Just what will he do?

What listeners say about Masked and Miserable

loved reading Andy and Aaron's story. sweet romance and I can't wait for Ghosts and Shelly's.

More focus is needed on this theme, IMO

I really think there should be more focus on stories like this. I really think Heterosexuals need this point of view shown to them more. It allows the heterosexual listener/reader to walk in the shoes of a homosexual; and experience a glimpse of their hell. I think society likes to pretend that the Homosexual’s path has been cleared but it hasn’t. I loved how this novel tried to ees