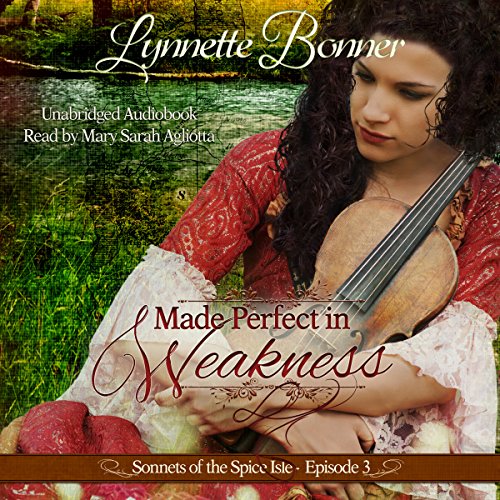 Made Perfect in Weakness

Made Perfect in Weakness

Resigned to the fact that Papa has made up his mind and will not return to Zanzibar, RyAnne determines to make the best of it. She won't leave her papa to die alone. But with the arduous journey they face, Papa might not even make it a few days down the trail, much less the weeks it will take to reach the village where he's determined to build his mission station. What will she do if he passes away before they arrive? Recently she's seen a softer side to Captain Dawson, but can she trust the man to get her home?

The closer Trent Dawson comes to proving the identity of the slave runners, the more he fears for the Hunters' lives. He can't help but admire RyAnne's determination to do right by her father. But he can't let any of that admiration show, because the men he's after won't hesitate to protect their own hides - and that means danger to anyone close to Trent. He just needs to get his charges safely to the village, and then he can get on with his business. The problem is...the little lioness, RyAnne Hunter, just might have sunk her claws deeper into his heart than he realized.

A thrilling historical romance from the time of missionary explorer David Livingstone.

This is Episode three of a serialized historical Christian romance story, set in East Africa at the height of the slave trade.

Ministering to the Natives

In the third of the series, RyAnne, Dr. Hunter and Captain Dawson travel deeper into the interior of Africa. Captain Dawson is looking for the men who head up the slave trade, and Dr. Hunter is there to set up a mission for the native people. His daughter, RyAnne is also a healer having been taught at her father’s knee since a child. Although continuing to get weaker, Dr. Hunter preaches the gospel to the tribes, as well as treats their wounds and illnesses. RyAnne teaches one of the women how to care for and treat others, too. They face danger from warring tribes and jungle wildlife, as their trek continues. Excellent historical listen