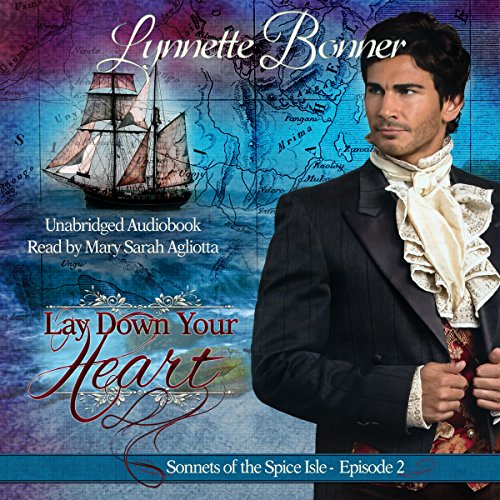 Lay Down Your Heart

Indian Ocean, off the coast of Zanzibar, early 1866

RyAnne Hunter is shocked, and rather put out, that Papa refuses to turn back to Zanzibar. All her carefully wrought plans have come to nothing! Now, with Papa's health much worse than she first feared, her only option is to accompany him into the heart of the Continent so he won't die alone. But Papa insists she abandon her skirts, and don men's trousers and boots! And to make matters worse, the irritating captain has decided she must learn to shoot a gun! In the face of all that, she's not giving up on her attempts to convince Papa to return to Zanzibar.

Captain Trent Dawson is most displeased to discover Miss Hunter stowed away on his ship. He's even more displeased when her father refuses to return her to Zanzibar, where she belongs. But when a slave woman is attacked by a crocodile and RyAnne puts herself in danger to save her, he begins to wonder if there isn't another side to the spoiled little heiress. Perhaps even a side he could admire?

A thrilling historical romance from the time of missionary explorer David Livingstone.

What listeners say about Lay Down Your Heart

Worth Buying All Six of the Spice Isles

I simply bought all 6 from the beginning. I have learned new lessons, saw different types of pain, rejoiced over many amazing ways God helped people act in the places God wanted them to be..trials come with joy..as weeping nights come w joyous mornings. A Clean Historical Christian Fiction. Ea section leaves enormous cliffhangers. While we allow for this in other books, here all 6 can be bought & You Can know the ending just as I am. Excellent Narration!

Not sure that I like the mini book idea. But I do like the story and I love the narrator - Mary Sarah Agliotta.

Stowed Away on the Wasp

The continuing tale of RyAnne Hunter, her father, Dr. Ryan Hunter and Captain Trent Dawson as they sail toward the interior of Africa in the second book of the series is just as rewarding as the first one. Captain Dawson was not happy to find RyAnne stowed away on his ship, The Wasp, nor to find how sick she was. With a high fever, Captain Dawson was forced to take RyAnne out into the cold waters of the ocean to break her fever and then nurse her back to health. Also angered that Dr. Hunter refused to send his daughter back to the mainland, Trent found himself forced to deal with RyAnne’s high spirited ways . . . as well as his own attraction to her. When a slave woman is attacked by a crocodile and RyAnne risks her own life to save her, Trent learns that there’s a lot more to the young woman than he imagined. Keeping the secret of her mixed-race birth to herself, RyAnne vows to continue helping the slave woman and the woman’s child. Great second installment to the series!

Would you recommend this book to a friend? Why or why not?
No. The reader of these audiobooks (this being the second) is terribly, terribly overdramatic... she makes it truly painful to listen. I had a hard time being able to tell if the book is over the top melodramatic, or if that's just the contribution of the reader! And the attempt at a British accent adds to the pain. I wasn't able to finish this book.

Has Lay Down Your Heart turned you off from other books in this genre?
not in this genre, but read by this reader for sure!

How did the narrator detract from the book?
Her bad attempt at a British accent coupled with her melodramatic way of reading.

you have to by to many books to finish the story , they should all be in one book, I will by the last one and find out what happens. 2 hr books are a rip off 😠😠😠