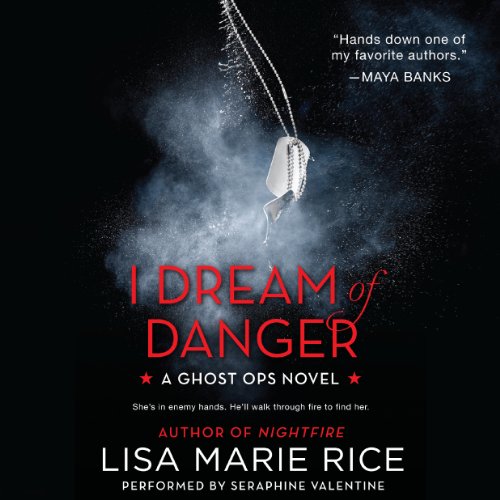 I Dream of Danger

They are the Ghost Ops: a covert squad of super-elite soldiers. After their team was betrayed and massacred, the three surviving members went underground and built Haven, a community of misfits and geniuses. Now they're at a crossroads, facing a new threat capable of destroying everything they hold dear.

When Nick Ross disappears from Elle Thomason's life, she is certain she'll never see the man she loves again - except in her dreams. 10 years later, as a respected researcher breaking new ground in psychic phenomena, she sends a desperate call for Nick's help. One by one, her colleagues have started disappearing...and Elle knows she's next. An elite soldier, Nick never meant to hurt Elle; duty kept him away - and then she vanished. Now troubled by unusually vivid, disturbing dreams of Elle in danger, Nick will rescue the only woman he's ever wanted and bring her back with him to Haven.

Though powerful men are after Elle and her special abilities, Nick will die before leaving her side again.

What listeners say about I Dream of Danger

Waste of time and money.

Somebody who doesn't have a brain, unless you enjoy listening to the same crap repeating itself over and over. Even free which it isn't don't waste your money or credit.

Has I Dream of Danger turned you off from other books in this genre?

What does Seraphine Valentine bring to the story that you wouldn’t experience if you just read the book?

She has a good voice and makes you feel the experience, but even with that the book isn't worth your time.

What character would you cut from I Dream of Danger?

Please get on with the book stop saying everything over and over.

I've spent the entire weekend listening to the two available Ghost Ops books, and I'm almost bouncing up and down in eagerness for the next instalment. Book 2 is about Nick and Elle, who knew each other as children. Miscommunication has resulted in their separation for ten years, but when Nick discovers Elle is in trouble he instantly wants to rescue her. Ms Rice has done some mighty fine writing with this book allowing me to live all the angst and anxiety the two main protagonists experience in the first half of the book. The second half is action filled and paves the way to the next instalment that I'll be getting just as soon as it is available!

It wasn't absolutely necessary to read the first book in this series to understand what was going on in this one, but I would fully recommend them being read in sequence. Secondary characters in Haven also get some story time which was a nice inclusion. Seraphine Valentine continues to narrate brilliantly. All in all, 5 out of 5! (Please do bring us more of Ms Rice's offerings - I have them all on my Kindle already, but I'd love to listen to them too!)

I love this trilogy so much!

In order to understand this audiobook to its fullest, it’s important to listen to the first book of the trilogy first. This is Nick and Elle’s story and it was just awesome! The chemistry of the two characters was so well written. I really don’t want to give any part of the story away, but we are still struggling against Arka Pharmaceuticals and Dr Lee, our villain. It’s very much worth the credit! Lisa Marie Rice is one of my all time favorite authors. Narration was just excellent! A++

Once I started listening, I didn't want to stop

I was anxious to read Nick's story after reading the first novel. This book caught and kept my attention.

Lisa Marie Rice is a good writer and this concept of books was interesting and enjoyable. I am a huge Military Romance fan and I enjoyed the twist that she put in this series.

Although this is the second book, it is a stand alone book. I am a stickler to read in series order but that doesn't mean everyone has to be :)

Again, Serephine does a great job narrating. I really enjoy the way that she read this and the last book. She fits the books very well and brings the book to life.

Two People with the interlaced lives.
Nick, orphan and fugitive of an abusive adoptive home.
Elle, daughter of a judge and with privileged childhood.
He was helped by her father and had a better life to leave of that moment. And the connection between Nick and Elle was intense right from the start.
Then it occurs a separation, he gets vanished by five years, only coming back at a big fragility and sadness moment in Elle's Life. To the long these years she never stopped dreaming with him and these dreams were so intense that seemed real.
The meet again of the two are explosive and extremely hot, but he has to leave again due to a mission.
They has a brief interlude and she thinks it was abandoned by him again...
Elle take it! a decision that changes life of the two totally.
Ten years pass and nowadays she is a researcher who work for Arka Corporation who has ramifications in several researches field.
Due to these researches and of her abilities paranormals, Elle faces great danger and she needs the help from Nick.
Nick answers to the request of helps of Elle, who was done through a his dream.
From this moment on starts to action and the team abilities are put to the proof. We know a little more of the other characters and of the facilities where they live (Haven) and also the enemy who they face.
I liked a lot of the reading, it has hot scenes of sex, action, adventure, supernatural and scenes very well writings that arrest reader's attention. Also very intense and emotional scenes that captivate and that arrest us to the history and let us with wish of discovering more about the secondary characters. I liked the couple Stella and Lucius. It has some terror touches and for the ones that like is great.
Mix hot scenes, males alphas, women geek and sexy, paranormal powers and scientific experiments, thence you have a very interesting book and with great power of arresting reader's attention. I recommend the reading and am going to wait for next book with anxiety.
The author writes well and is specialist in males alphas!
Seraphine Valentine was outstanding in the delivery of this book and book one.

This is why Lisa Marie Rice has become an 'auto download' author for me because she delivers very well-written, exciting and enjoyable plots, adds uber-sexy hot Alpha males who passionately love and sexually indulge and, through each book, runs a romantic heartwarming story that's just waiting to captivate and entertain you.

She continues her Ghost Ops series with the heartbreaking story of beautiful but naive and broke Elle who has always loved Nick but, after just one memorable night of passion, his duty calls and a terrible misunderstanding arises which has devastating consequences for both lovers. Then, 10 yrs on Nick finally gets another chance with Elle, who haunts his dreams, as she supernaturally reaches out for him and he becomes distraught and frantic as he hears her desperate cry for help and he, along with the other members of the covert super-elite team, try to rescue her before it's too late.

Then, as the drama unfolds, we hear about secret experiments, kidnapping, murder and some greedy villains who are planning on world domination through a genetically modified and supernaturally enhanced team of super soldiers. But, as the action heats up, so too does the sexual chemistry and passion filled hours as Nick and Elle resurrect their feelings and love, once again, blossoms.

Worth a credit? I may, one day, come across one of LMR's books that wasn't worth a credit - but this thankfully wasn't it.... so YES very creditworthy.