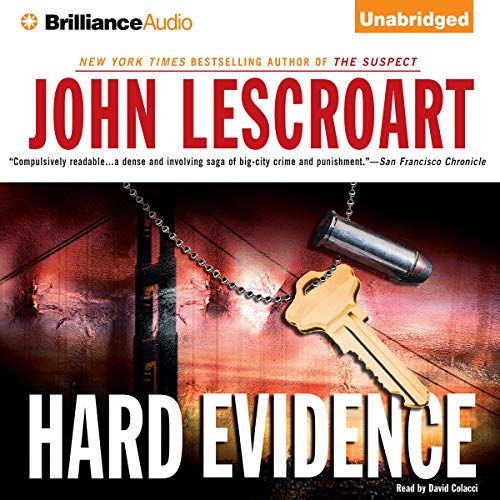 When the bullet-ridden body of a Silicon Valley billionaire washes up on shore, assistant D.A. Dismas Hardy finds himself the prosecutor in San Francisco's murder trial of the century. The suspect: a Japanese call girl with a long list of prominent clients. But when a bizarre series of events blows the case wide open, Hardy finds himself on the other side of the law - as a lawyer for the defense.
Check out more titles in the Dismas Hardy series.
©2007 John Lescroart (P)2007 Brilliance Audio

What listeners say about Hard Evidence: A Dismas Hardy Novel

Got My Money's Worth But...


This is my second try at a Lescroart adventure. Like trials? This book's got a couple of 'em. Like nasty curves? There are more here than NASCAR's Darlington Raceway's got. I liked it but...

I'm not sure who Dismas Hardy's supposed to be. Maybe thats the point and the guy's a major work in progress? That's what I thought after reading his "Dead Irish". Frankly "Hard Evidence" is like that book... you know, like drinking last-night's beer the morning-after popping the top. Will future Hardy novels get effervescent? Even though David Colacci's doing his best, do I want to pay to find out?

This was a good book. good characters that are well developed . A decent and believable plot and nice pacing. this is the first book in the dismas hardy series ( first in the courtroom series) there are two other books before this one were he is a bartender. But the author does a good job at catching you up in the series. Worth the money or credits.

I've listened to probably hundreds of audio books, and I've always been able to find something that caught my attention, even if I wasn't a fan of the book. If nothing else, I'm cheap and don't want to totally lose the $$ I put into the audiobook. Unfortunately, for the first time ever this book has totally failed to grab even a little of my attention. I find myself daydreaming while I'm 'listening'. Can't say it's the narrator. Couldn't identify with the characters at all. Maybe I'll try again in a year - for sure I won't remember any of it.

...due to trouble with narrator, but story not all too compelling either. Reminded me of old plot lines from the annals of "Hart to Hart".

Narrator David Colacci uses a technique I have come to think of as the "Rip Torn" scale of character differentiation: gruff, gruffer and gruffest, with a few female gruffsters thrown in for good measure.
The only character voices who have bothered me more are Dick Hill's women (who belong in children's cartoons and would therefore be credible sounding only if drawn as hedgehogs or koala bears), and anything recent by Scott Brick (The Lion by Nelson DeMille seemed voiced in a Ritalin fog).

I liked our protagonist Dismas, and was getting almost close to caring about his life, wife and career, but then along would come Colacci with another character voiced with some Rip Torn gruffitude and the whole scene would fly out the window for me. Realistically, I suppose I have been spoiled by master craftsmen like Joe Barrett, Humphrey Bower, Tim Goodman, David Timson, and Steven Weber.

Whodunnit too predictable, plot too seamy

This is my 3rd in the series the 1st one I read was later, written more recently, and I liked it okay so started back at the beginning. I really don't like these early ones. Dismas is not a very sympathetic hero. (Very immature and reckless and not too smart.) --some icky sexual relationships. Also, I'm no wizard and I knew who'd "dunnit" almost from the beginning and could anticipate the plot turns. You know you are in trouble when you speed up the voice to try to get through faster. I like the reader though.

I've enjoyed Lescroart's Hardy series for many years and decided to listen to them all again. I had to check the original publication date on this installment because it's almost more than I can take. 1993 explains a lot. The main character in this novel seems to be lasciviousness, and while David Colacci provides good narration in later books, here he has all the vocal subtlety of a sledge hammer. The book is filled with outdated sexual stereotypes and thinly-veiled misogyny. Between the author's words and the narrator's voice the sex scenes, which are much more explicit than in later books, are pure ick. Caveat emptor.

a great story! from start to finish I stayed involved! the great story, and a great narration! I absolutely loved it

Maybe another Lescroart novel will appeal

Not very complex plot much too easy to figure out. Perhaps I should try a more recent offering from the author--something a bit more "developed" and well-rounded.

Phoned in the ending

What did you love best about Hard Evidence: A Dismas Hardy Novel?

Would you be willing to try another book from John Lescroart? Why or why not?

Yes, I've enjoyed many of the books in this series

He really is the voice of these characters. And it has a lot of range and expression. Great storyteller.

The DA underestimates Dismas Hardy, and it comes back to hurt him.

Great story with many good turns. We get to see the vulnerable side of the protagonist in this one, which is refreshing. There's a buildup to the ending with a lot of tension, but after having done all that work we learn of the final verdict after the fact by way of a narrated account of the newspaper columnist. I found this device to be disappointing and anti-climactic. The author went through great pains throughout the book to build the tension with incredible detail, but at the end it felt like he got bored, and cut strait to the punchline. I have read one other in this series where a similar device was employed, and felt the same disappointment.