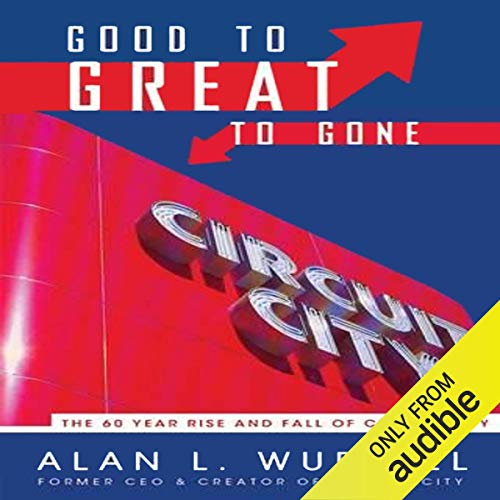 Good to Great to Gone

How did Circuit City go from a Mom and Pop store with a mere $13,000 investment, to the best performing Fortune 500 Company for any 15-year period between 1965 and 1995, to bankruptcy and liquidation in 2009? What must leaders do not only to take a business from good to great, but to avoid plummeting from great to gone in a constantly evolving marketplace?

Alan Wurtzel, son of Circuit City founder Sam Wurtzel, took over as CEO in 1972 and implemented a successful long-term strategy that simplified the company by unloading unsuccessful acquisitions, expanded the few winning divisions, and preserved the distinct employee culture his father created, positioning the company for unprecedented success. For almost 50 years, Circuit City was able to successfully navigate the constant changes in the consumer electronics marketplace and meet consumer demand and taste preferences. But with the subsequent decline and ultimate demise of Circuit City in 2009, Wurtzel had the rare perspective of a former company insider in the role of an outsider looking in.

Believing that there is no singular formula for strategy, Wurtzel emphasizes the "Habits of Mind" that influence critical management decisions. With key takeaways at the end of each chapter, Wurtzel offers advice and guidance to ensure any business stays on track, even in the wake of disruption, a changing consumer landscape, and new competitors.

What listeners say about Good to Great to Gone

I really enjoyed this work. As a former employee, it brought back some fond memories...

As a former CCSI employeeI found this interesting.

Brings back memories good bad and indifferent. so many small and not so small things wrecked a once great company to work for.

Beautiful and Sad - the only words that fit; a documentary played out on a stage, in which the outcome is pre-determined yet you cheer for the doomed protagonist hoping salvation comes....but it doesn’t. Every CEO and entrepreneur should study Wurtzel’s teachings.

4 stars is a good book for me and took a few learnings, it is a mix of business and the circuit city story.

This book is a great look at the rise and fall of an American business, and the opportunities and pitfalls that face a business over its life span. It tells the story of how a company can have enormous success, then fall victim to bad management that leads to its ultimate downfall. A great listen.

Fantastic read for people with retail and/or business interest

Having worked at Circuit City in the late 90s/early 00s, it was extremely interesting to hear the behind the scenes stories of what was going on.

Having read a lot of business case studies, it was fascinating to hear how management made blunder after blunder and ran the business into the ground. It really put my more recent work experience into perspective.

Some of the “lessons” can be repetitive and annoying, but other than that, I greatly enjoyed this audiobook.

I'd say this is mostly a book about business practices using Circuit City as the way to string everything together. A lot of the business stuff is common sense but I'd say it's a good overview of things to do and not to do. The history and decline of Circuit City is very interesting, and it's covered quite well and mostly seems pretty fair. The book was never dull, at least for me. As a child growing up in the 80s Circuit City was my favorite store to go to as they always had the coolest new tech, going into the 90s they had things like the 3DO, early 3D/VR and I bought a ton of car stereo stuff there as well - so comparing his notes of what was happening to my memories I think made the book a lot more interesting. If you're of my age when you went to Circuit City what was cool about the place was that it was so different than all the other stores out there, it was dark, everything was in sections, they had high end stuff - it wasn't the generic box store it became in its later years.

Anyways if you read the summary of the book and find it interesting then you should like the book.

The reader was fine, just a straight professional reading which is appropriate for this style of book.

Lessons in life to be learn

This book shows how courage and determination can open the gates of heaven to create an empire and also how the effort of many careless and insensitive people could destroy the hard work of many, also how lack of leadership on the critical moments in life can sink the biggest ship on the oceans

I may be biased since I worked as a Store Director for Circuit City for 7 years. I always knew at store level the decisions that affected our business. What was so surprising to hear were the decisions that were made at a corporate level, behind the scenes. So many opportunities for this great company to recover, were squandered. Circuit City will always remain near and dear to my heart.....I learned so much... And those learnings have helped me continue to be successful in my career. Such a shame though!

Yes - beyond the Circuit City story, this is a solid business book

I was with Circuit City till the end - for me, the #1 benefit is understanding how this massive company could collapse. You hear things, but I put far too much blame on the leadership at the end, when in reality the issues were shared, and realistically the company was dead because when we were on top, we focused on wall street perception instead of dealing with the problems. At that moment, a different decision ... along with better choices in CEO and Board interaction would have turned it all around