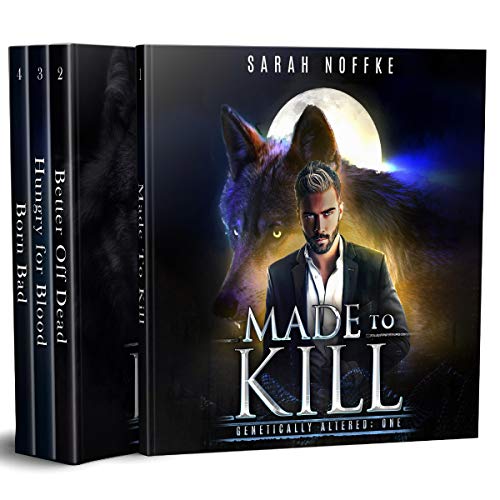 Werewolves like you've never seen before. They don't howl at the moon, but they are deadly.

Six months later they awake from drug-induced stupors to find themselves locked in a lab.

And on the night of a new moon, 11 of those men, possessed by new - and inhuman - powers, break out of their prison and race through the streets of Los Angeles until they disappear one by one into the night.

Alpha Wolf, book one: Olento Research wants its experiments back. Its CEO, Mika Lenna, will tear every city apart until he has his werewolves imprisoned once again. He didn't undertake a huge risk just to lose his would-be assassins.

However, the Lucidite Institute's main mission is to save the world from injustices. Their best agent, Adelaide Lewis, needs to find these mutated men and protect them and society, and fast. Already around the nation, wolflike men are being spotted. Attacks on innocent women are happening. And then, Adelaide realizes what her next step must be: She has to find the alpha wolf first. Only once she's located him can she stop whoever is behind this experiment to create wild beasts out of human beings.

Lone Wolf, book two: When one man can't reconcile with the wolf inside of him, he knows all he can do is run. Take the wolf with him and run away from those he doesn't want to hurt. But will that be his greatest mistake?

Rabid Wolf, book three: A string of murders involving women are making the residents of Los Angeles panic. They're calling the serial killer the "rabid wolf" because he tears his prey open by the throat and leaves behind a maimed body.

Bad Wolf, book four: Mika Lenna, the CEO of Olento Research, won't be deterred. Yes, the Lucidites have the upper hand, but he has something better. The one thing that can really stop them. The potential to create the rivalry to any werewolf. Mika has crossed the final threshold of humanity to do something that no human would dare do. But if it pays off, then for him, it will all be worth it.

So much more than I thought could be done with this o on audio. The narrator did a wonderful job with the accents. I read the books ,so when I heard the narrator do Adies voice it was just like imagined it to be. The story was action packed and full of great danger.

Mz. Noffke has done it again. A must read.

Received for an honest review.

Sarah Noffke has done it again. Her three series The Lucidites began this universe quickly followed by Ren that lead up to her newest series Olento Research. Adelaide has enough on her plate living up to being Ren's daughter then he had to go off and follow the woman he loved into the next life. Living up to someone whose knowledge was unparalleled was difficult for Adelaide to live up to and then Ren has passed along his level five werewolf case to make her life even more complicated. Add to that, Adelaide was assigned FBI Agent Rox Spear who was her irreverent behavior and shockingly inappropriate attire rubbed Adelaide the wrong way. All she has left is her father's book that seems to randomly open to pages with information that steers her in the direction she needs to go. Adelaide has to not only find the missing werewolves, but uncover who was the mastermind behind the plan before more people are hurt.

This incredible series included many characters form earlier series while adding new members creating an intricate and riveting story. The struggle between good and evil was challenged as the reader began to realize that the men may have been experimented upon, but their basic nature had not changed leaving them to struggle between their two sides, one human and one beast. Their creator Mika isn't at all happy and it determined to get his property back and all that is standing in their way is Adelaide and the Lucidites!

This audiobook book was incredible to listen to adding depth to the story as it unfolded.

Genetically Altered, Complete Boxed Set
Made to Kill Box Set is an audible book I requested and the review is voluntary.
Book 1. Alpha Wolf ( or Made to Kill): A Paranormal Science Fiction Thriller (Olento Research #1) written by Sarah Noffke is narrated by Elizabeth Klett. It is a pretty cool book. The men are all taken and put in this research facility for 6 months and experimented on. There are 12 of them. They are kept drugged. One of them has extra strength, after all the the experiments, busts them out, all but one that was asleep/drugged and they missed getting him out. Two gals from different institutes are forced to work together to find the men, the gals are on the good team and want to save the escaped men before they are found again. These two chicks are so obnoxious I want to slap them from here. The rest of the people at the institutes are great. The rest of the story you have to find out by reading yourself...not going to spoil it... Good story except for those annoying women! Ugh! The narrator did a wonderful job. Great voice for this book. 4/5 stars.

Book 2. Better Off Dead ( or Lone Wolf): Olento Research #2 by Sarah Noffke and Elizabeth Klett continues book one. Half the weres have been found and half are still to be found. Some have no idea what happened to them. It's interesting to see how each find their abilities. Some are just werewolves, some dream travelers, and some are now a hybrid human? Some have super-powers like abilities. The search is one to get the free one before others get them to do more studies.
5/5 stars. Lots of action!

Book 3. Hungry for Blood (or Rabid Wolf) Olento Research #3 by Sarah Noffke and narrated by Elizabeth Klett is a lot more suspenseful than
the other books! One of the free weres goes on a killing spree so it is a
bit darker. The suspense continues when Adelaide goes undercover in
the other research group to spy. Very dangerous! 5/5 Stars!
Could there be a cure for the werewolf change but would the risks
associated with it be worth it?

Book 4. Bad Wolf (or Bad Blood) Olento Research #4 by Sarah Noffke and narrated by Elizabeth Klett is the final book in the series. This book really deals with a lot of dream travel, individuals issues, and the ending could not have been better! So much is tied up for good and bad. A great series. The narration was terrific all the way through! 4/5 stars.

The Genetically Altered 4 book Series introduces engineered werewolves to Noffke's amazing Dream Traveler world and is a great deal for just 1 Audible credit. These wolves are not like any other were's you have read about, they are the first of their kind and are on the run from their creators. The stories and characters in all four books easily captures your imagination. From Mika's ruthlessness and Drake’s twisted mind, to Rox's sass, Conner's self-deprecation and Adelaide's sarcastic repartee, you will love, cry for, fear or despise them. These books have you on the edge of your seat, make the hair on your neck stand up, make you laugh and will keep you captivated right to the very last word. The narration in the audiobooks is excellent, Klett gave the characters individual voices and accents, and showed the humour and emotion well. The stories weave a thrilling tale full of intrigue, action, loss, humour, romance and strife; one takes you on a journey that pulls at your imagination as well as your heart. It is an excellent series that will keep you captivated to the end.

Have you read the rest of the books in this universe? If not, go find them and listen/read them as well. You must be drawn into this character-driven universe and abide there with the rest of us. If you dream of a surly redheaded man be sure to listen to him when he says to read these books!

This particular series is a great twist on the author's normal books in this universe. I love love love werewolves and to have a scientific origin and a modern twist on werewolves is so much fun! I love every one of the members of the pack. They all draw you into their story and won't let you go until they have whispered the end into your ear. Buy this series and then go find the rest of the books by this author!

Could not get past 4 hours

The problem with this book is the level divisive and derogatory speech that I was not able to continue to listen to it. I understand that the author was trying to get a point across about how one character feels toward the other character but to use the term Dog over and over again made it seem that the author might be prejudice. I have worked a lot with Arabic speaking people and the use of the word Dog to describe a person is highly disrespectful. I would say the author should have toned it down a bit.

I really liked the characters and their dialogue. Some of the characters I hated through out the story only for them to grow on you and end up liking them. The story and characters are really good and developed Cause those are the ones you either love or hate.

Let’s start with the fact that I’m a huge werewolf fan.

This fresh take on their creation sucked me right in. I’ve read quite a few of Ms. Noffke’s dream traveler books so I was also happy to see the return of familiar characters, especially Adelaide, who really comes into her own through this series.

As for the werewolves themselves, they are super well written, each distinct in the page. (I’m a big Conner fan!) I loved how their story arcs progressed individuality and as a pack.

I hope more gets written in this world and these characters make appearances!