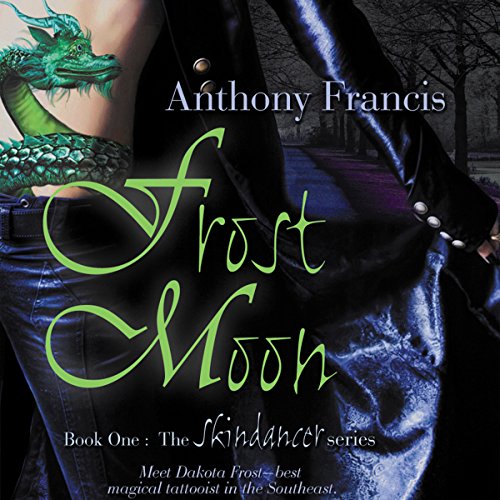 In an alternate Atlanta where magic is practiced openly, where witches sip coffee at local cafes, shapeshifters party at urban clubs, vampires rule the southern night like gangsters, and mysterious creatures command dark caverns beneath the city, Dakota Frost's talents are coveted by all. She's the best magical tattooist in the southeast, a Skindancer, able to bring her amazing tats to life.

When a serial killer begins stalking Atlanta's tattooed elite, the police and the Feds seek Dakota's help. Can she find the killer on the dark fringe of the city's Edgeworld? Among its powerful outcasts and tortured loners, what kind of enemies and allies will she attract? Will they see her as an invader, as a seducer, as an unexpected champion...or as delicious prey?

Frost Moon is Book One of the Skindancer fantasy series by debut author Anthony Francis. Filled with unforgettable characters, spine-tingling action, kinky rebellion and edgy love, Frost Moon is classic storytelling at its best, and Dakota Frost is an irresistible new star of fantasy fiction.

Anthony Francis is a computer scientist who works at the "Search Engine That Starts With A G". By day he studies human and other minds to design intelligent machines and emotional robots; by night he writes fiction and draws comic books. He received his Ph.D. in Artificial Intelligence from Georgia Tech. He lives in San Jose with his wife and cats but his heart will always belong in Atlanta.

What listeners say about Frost Moon

Loved the premise -- skin dancer (her tattoos aren't just for looks, they help her kick butt) and tattoo artist fights evil in an Atlanta riddled with vampires, were kin and wizards. I anticipated shades of Marjorie Liu's Maxine Kiss (who has tattoos who are demons) and the Atlanta of Ilona Andrews's Kate Daniels series.

However, Dakota Frost wasn't the strong protagonist that I anticipated. Sure, she has a mohawk, cool magical tattoos and is wonderfully snarky. She continually reminds us how buxom and awesome she is. But some of her reactions seemed a bit too "girly girl" for a mohawked bisexual heroine.

Still, good world building, a decent plot and an unique spin. Worth the credit.

Traci Odom delivers. She gives the characters distinct voices without getting campy.

I had read great reviews and knew I'd like this book. Yup, sure enough did and want more. Cool world, similar to many we've encountered in other books with minor deviations. The authors influences are pretty obvious, (MTG) and easy to track, sometimes to the point that I wish he'd leave some of his personality and beliefs ( largly christian I'd guess, or maybe that's just coincidence, but everything seemed to come back around to a bible verse or belief) out and let the characters have free reign. The political voting talk, the amount of Prius talk, gas talk, moped talk... Ok ok... I drive a car that was chosen for gas mileage alone and still find it annoying! Anyways, that aside, because truly it was really minor, the story was great. The characters were fun, their powers sometimes predictable but also cool, the skin dancing was really awesome. I cant wait for another book.

Give it a pass

When the lead character comes straight from a male author's wet dream, is superficial and incredibly stupidly behaving (hello? you don't have them dress and act kick ass then immediately become compliant and stupid) and the supporting characters are more of the same.....

Traci Odom does a fantastic job with the narration. The characters have clear and easily distinguishable voices. Too bad this was not worth reading.

In summary - if you want marginal urban fantasy featuring a lot of primarily female BDSM/bisexual play as conceived by a guy this might be the book for you. If you want sex that is linked to the plot - go read Hamilton. If you want excellent urban fantasy relating to magic and tatoos - go listen to Angel's Ink.

Looking forward to listening to the entire series!

Great book! I loved the setting (probably because I live in at Atlanta lol) the book kept my interest. I thought it was interesting that the heroine was not the all powerful kick butt character that most books have. This character's flaws help you to identify with her. I look forward to the fact that she plans on developing her "ninja" skills :) All in all, this book is worth your credit or your money. I am looking forward to listening to the next one.

I also want to mention the narrator, because they often make or break a book. Traci Odom was good! The voices were distinctive and natural. Anthony Francis, I often avoid reading books written by men, or at least the ones that I read for my on enjoyment. Thanks for surprising me.

This was an interesting start to a series. I can't say I was on the edge of my seat but once I got a couple of chapters in I didn't want to stop! I'm eagerly waiting for the next in the series. I was very surprised at how much I ended up liking this book.

Can't Wait for Next Book!!

This is a great start to a new series. Interesting world building, characters that you can relate with, solid development of the plot. I was hooked from the beginning. I have been to Atlanta and have visited the Undergound. The city abounds with history, love how some of that was interwoven into the story. Gave the story a realistic appeal.

Traci Odom did a fantastic job reading, especially with all the distinct voices. It was a pleasure listening to her. She really bought the story alive.

Normally I shy away from men writers of the paranormal/fantasy....except for Jim Butcher, but Mr. Francis did a wonderful job. Thank you!

And yes I am eagerly awaiting the next book in this series.

Why did I wait so long?

I either got this book as a Kindle freebie back in 2011, but never got around to reading it. Then, it stayed in my Kindle library, mostly forgotten, until a challenge from my Urban Fantasy Aficionadas book club had me looking into past group reads. Add in low cost Whispersync narration, and I was off and running in dual formats. What I experienced was a well-written start to what could easily become a solid urban fantasy series.

I could not help but draw comparisons between this book and some of my other UF favorites. The book is an alternate modern day reality where magic and magical creatures are known to exist, similar to the worlds of Kate Daniels and Harry Dresden. The Atlanta setting and plucky female protagonist were more than a little reminscent of the Kate Daniels series, but I don't mean this to say that this series is "me, too" in any way.

The story followed the exploits of Dakota Frost, a magical tattoo artist, who unwittingly gets pulled into a magic-related hunt for a serial killer. What was nice to see was that Dakota, while full of bluster, was not a stereotypical urban fantasy bad ass. She was just a gal living in a dangerous world, using her intelligence to survive.

My one criticism of the story was that it featured that tired old it's-raining-men trope. Almost every key male character was gorgeous, and seemingly interested in Dakota. Fortunately, the story did not go further down this path with a over-blown romantic plot. Yes, there was a slight romance that brewed throughout the story, but it did not get in the way of the overall plot.

I was so pleased to discover such an enjoyable new urban fantasy series that I immediatly bought the Kindle/Audible versions of the next book and jumped into another great Whispersync experience. Usually, I am not that impulsive in my book purchases, but I really wanted to see if the next one is as enjoyable. Stay tuned....

Good First Book in a Series!

This author was new to me and I loved the characters. They were sympathetic and I wanted to be invested in them. That always makes for a good story for me. Can't wait to read the next in the series.

So Bad I returned it!

What could Anthony Francis have done to make this a more enjoyable book for you?

The main character was unlikeable.

Could'nt get past the plot.

The premise was intriguing and novel - magical tattoos. I was looking forward to seeing how the author developed this concept, and he did a great job with it in those sections where the protagonist was discussing or practicing her art/trade. The supporting characters were well done by the author and the reader, but the main character not so much. In fact she spent alot of time whining and wringing her hands over her stupid choices. That didn't really match up with the picture of a woman who is 6'2" sporting a colorfully dyed mohawk. By the middle of the book I was saying to myself "Pleeease make it stop. When will this book ever end?" Both the author's writing and Tracy Odom's portrayal of Dakota Frost were like nails on a chalkboard for me. I was really disappointed by the treatment of such a great idea.

So no, I would not recommend this book.

PS - As a small woman who rides a 400cc Suzuki scooter at 70 mph in rush hour freeway traffic in Phoenix, I'm incredulous/disgusted the author put a 6'+ woman who lives in a lg metropolitan area on an itty bitty scooter. Really?

Interesting start to a series

Enjoyable 1st book based around Dakota Frost, (cool name) who is a magical tattoo artist. It is set in alternative world Atlanta and a decent job has been done at world building.Well paced and good narration