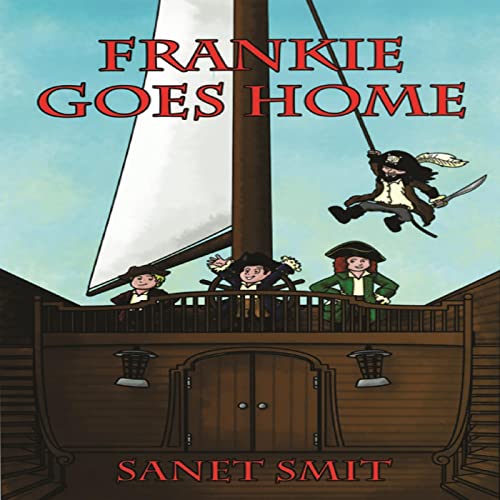 It is 1863. With his friends, Frankie boards a ship to return home from a sailing trip. A storm interrupts their journey, and they are stranded on a deserted island and have to find a way to survive.

Pirates attack their newly built ship, and they are captured and sold as slaves. They learn to accept what they can’t change and appreciate what they take for granted.

Despite the hardship of working as slaves, they learn valuable lessons and are rewarded in the end with freedom.

From humble beginnings to a heroic end, they return home stronger and wiser than before.

As a young child, Sanet would conjure up stories, share them with anyone who would listen. Growing up, she has taken the time to refine her storytelling and writing abilities and its potency in storytelling.

Sanet studied in South Africa and New Zealand. Her current movie is in pre-production, and her plans include a television drama from one of her published books.

"Working on supporting families with special needs children and children caught in Domestic Violence, I can see how this children's book supports and benefits. There are many families, especially children struggling through family breakup trauma. While empathic, this book is positive, and the storyline can be the spiritual support they need. Since being a carer for our daughter with complex medical needs, I have been made more aware of the emotional and physical strain parents of special needs kids endure. This children’s book’s financial assistance will make a big difference. I recommend this book to all children." (Major Dianne Gluyas, Pastor at Salvation Army Calamvale, Australia)

"It is a blessing and pleasure to endorse our dear friend and sister in Christ for the work done in writing Frankie's story. We face many of the challenges Frankie had to go through. I enjoy the way Sanet is portraying God's commandments. It is straightforward to understand. Sanet uses her talents and rich imagination to bring characters to life. I feel like I know Frankie personally and experienced his emotions as he navigated through the challenges he faced. She added the right amount of empathy yet sternness to accurately bring the message. You can feel the writer's heartbeat in their characters, which is again evident in this work. I am not surprised as I know Sanet as someone who would cook a three-course meal for a family out of the goodness of her heart, without knowing them. I am convinced that many people, young and old, will enjoy and learn from this book for many years to come. Frankie Goes Home receives my highest endorsement. I would love to give each family in our church a copy." (John Shipman, Pastor at Kings Way Christian Fellowship Melbourne, Australia)

"This Christian book is a gentle, well-paced Christian narrative with a strong overall story arc and well-defined main characters. The 10 commandments' teachings are naturally woven into the story, demonstrating how following God's Word can be challenging and rewarding. This manuscript has the feel of some of the Bible stories I've read as a child that introduce Christian concepts through parables and fables. It provides young readers a way to access and understand the 10 commandments in a way that applies to real life. This children's book would fit in nicely with other similar Christian publications." (Gene Flynn, writer and editor, Brisbane, Australia)