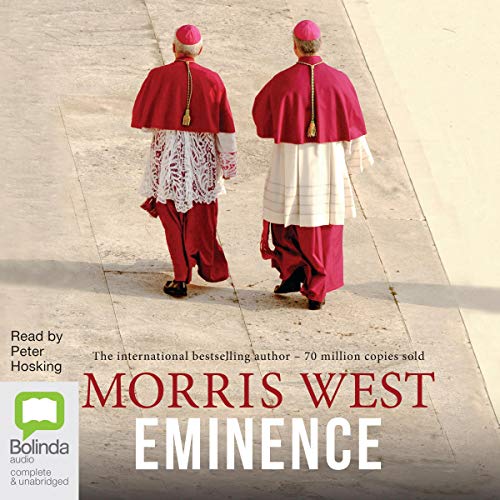 An Argentinean cleric, tortured in the 1970s, is rescued and brought to Rome. A generation later, having risen within the hierarchy, a candidate for the papacy himself, he must confront his past.

As a young and outspoken priest, Luca Rossini was brutally tortured in an Argentine military prison, and then nursed back to health by the beautiful Isabel.

Exiled to Rome to avoid scandal, Rossini becomes a cardinal and the pope's confidante. He is admired and feared by his colleagues, for he understands the Church, speaks frankly and knows how to present his ancient faith to the media. When the pope becomes gravely ill and a successor must be chosen, Rossini takes a central role.

In the midst of the political intrigue that surrounds the selection of a new pope, Isabel arrives in Rome - along with Rossini's daughter. Suddenly, Rossini must confront painful memories of Argentina and the scandalous passion of his long-suspended love affair. Eminence is Morris West at the peak of his powers as a novelist, offering profound insights into the workings of the Catholic Church in a gripping personal story.

What listeners say about Eminence

Morris West writes amazing stories around the machinations of the Catholic Church. Fiction set in true events makes for a great read . Didn't like the narrator. A stronger voice was neede5 for this story.

A good read for a practicing Catholic. Could be an interesting read for non Catholics looking for infarction on the election of the Pope. I hope more of Morris West books become available on Audible.

Who would want to read a novel about anything as stuffy and boring as the people who populate the Catholic Church? This book like many others by this sublime writer has left me with hope and reassurance - it is full of real people - the good, the bad and the corrupt! But that is the world that we ordinary people live in and therefore it is not surprising that such ordinary fallible people populate the Church. But as I put this book down I am left with hope and the reassurance that love will always overcome! Simple from the heart love permeates each sentence and that is the genius of West. Almost from the beginning it ceases to matter that the characters carry eminent titles because in the hands of this maestro they become simple men and women who experience pain, suffering, joy, happiness and love. This is a book about love and love gives us hope and reassurance.