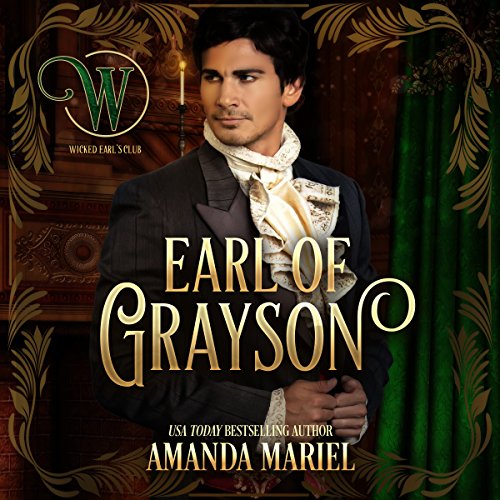 Damien Archer, earl of Grayson, and Lady Charlotte Lawson are opposite in every way. Where his coloring is dark, she has blond tresses and blue eyes. Charlotte’s alabaster skin tone is a stark contrast to Damien’s sun-kissed tan. He is tall at six foot three, while she is short at barely over five feet tall. Furthermore, her cheerful disposition is in stark contrast to his brooding nature. But most bothersome of all is his tendency to flaunt society’s rules while she follows them without fail.

Damien desires nothing more than to spend his time carousing, drinking, and gambling, while Charlotte spends hers at afternoon teas, balls, and musicals. She is a true lady and he a determined rake.

When their paths cross, they have every reason to turn in the opposite direction, and yet they cannot seem to avoid one another. Passions flare, putting them both at risk. They stand not only to lose their reputations, but more importantly, their hearts.

What listeners say about Earl of Grayson

Love the book. Audio is awesome by Mathias Holt. His voice is so amazing the way he goes into different voices. Great choice for a reader. Can’t wait to hear more from him and listening to your books. I’m a new fan.

Unfortunately not offensive or very interesting .

First of all, this is a tale that has been told ad nauseum. The trope is old and stale unless something else is thrown in to hook the reader. I am not a writer but obviously that would entail a longer, more involved work than this short story. As a reader, I find the short story format is better left to a select set of highly skilled authors. There are a few storytellers who have the ability to manage it. It also could have used more steam for my personal tastes but it must be hard to find the right place on the continuum to satisfy without offending other readers. So while there was nothing interesting about this publication, there was nothing offensive.

I liked the accent and timbre of the narrator's voice but it bordered on monotone. It would have been more enjoyable with more inflection and emotion. In conclusion, I found the joint effort mediocre but empathize that it must be a difficult field.

The Earl of Grayson was a short lovely book. How Earl's fallen for a woman when he's never wanted to wed. It all worked out just beautifully. I loved the chosen narrator's voice. Although in some parts while telling the story it was quite monotone. I wish for a little bit more colorful reading just like when he used for direct speech, which was brilliantly done.

Would I listen to it again: yes
Did the story keep me engaged: yes
Was I invested in the characters: yes
What did I like about the story? good pace and entertaining characters. I loved Damien's character and his determination to stick to his 'wicked ways'.
Was there anything that didn't work for me? not with the story itself, and Mathias Holt has done a great job with most of the narration, however sometimes it felt a little flat during the non dialogue parts of the story, not enough to pull me from it though and it was still an enjoyable audio experience.

These characters are a true match for each other but, will their past stand in their way?

The only thing I didn't like was that I wish it were longer!

The narrator does a great job of bringing the story to life.

I really enjoyed this novella. I have not read anything by Amanda Mariel, until now (thought technically I listened ;). I will definitely be putting her on my “to be read” list. Her characters are well drawn. Her scenes are pretty well fleshed out to give the ability to be emerged in the story. Mathias Holt has a wonderful voice that gave even more depth to Amanda’s word. All in all and very nice pairing. I would look for more from both author and narrator.

This short, 2-hr Regency romance has a sexy male narrator who does a pretty good job. His accent sounds Welsh to me, and his voice is hot. He is pretty good at female voices as well as male voices. I would like the get more from the narrator, Mathias Holt. He is not the best narrator ever, but he has a soothing and delicious quality to his voice.

I was a little disappointed in the writing. I am okay with the plot that has definitely been done before. However, nothing else elevated the story above mediocre. The characters, dialogue, and prose did not lift the story above the average Regency romance. I got a bit bored in the middle, and I got a little annoyed with the main characters. Thankfully, the story has a really nice, romantic, satisfying ending. I would say the story is lightly steamy, with a brief bedroom scene that is passionate and well written.

Another Earl swearing off marriage. Damien even breaks her heart and walks away on her leaving her for years. Her broken heart has put Charlotte on the unmarriageable list and shes running out of years to be considered a good catch. So she goes to him in a last attempt and asks him to help her catch a husband. And he does just that, but they both soon start to realize they still love each other. Nice job on the narration.

Another Wicked Earl Bites the Dust!

Damien Archer, Earl of Grayson, has vowed never to marry, he's determined to keep his membership in the Wicked Earls' club. A decade ago, he courted and revered Charlotte Lawson but left her when she confessed her love for him. Years later, Charlotte turns up on Damien's doorstep to ask him for a favor that shocks him. Guilted into helping Charlotte find herself a husband, Damien must repress his own feelings for the fiery beauty.

This was a fun quick listen with a pair of lovable leads. I always enjoy this author, she writes some truly funny moments! The Wicked Earl's club is a collection from a variety of authors and I love reading each author's take on the club. I only wish it was longer! I enjoyed the narration, he narrated in a dramatic way that pulled me into the story. I requested a copy of the audiobook, and I'm voluntarily leaving a review.

Such a beautiful story.

I loved this story. It is sweet and romantic. The wicked earl’s had me cracking up when they stayed out all night, then woke up to the noise in the attic. (Don’t want to give anything away.)
Damian is a strong, sexy, wild, wicked earl that I instantly loved. His struggle into letting go of his wicked ways and surrendering to everything inside his heart is most endearing. I truly loved this story and highly recommend it.
Narrator: I would like to encourage more emotion during the reading sections, when there aren’t any characters. That would be great.

An entertaining, quick. short read. A predictable storyline but a nice addition to the series.