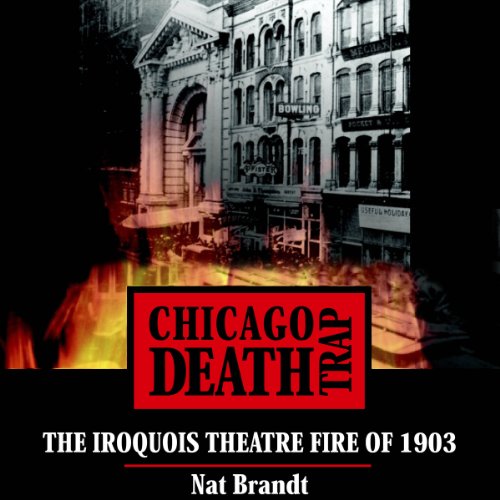 On the afternoon of December 30, 1903, during a sold-out matinee performance, a fire broke out in Chicago's Iroquois Theatre. In the short span of twenty minutes, more than six hundred people were asphyxiated, burned, or trampled to death in a panicked mob's failed attempt to escape. In Chicago Death Trap: The Iroquois Theatre Fire of 1903, Nat Brandt provides a detailed chronicle of this horrific event to assess not only the titanic tragedy of the fire itself but also the municipal corruption and greed that kindled the flames beforehand and the political cover-ups hidden in the smoke and ash afterwards.

Advertised as "absolutely fireproof," the Iroquois was Chicago's most modern playhouse when it opened in the fall of 1903. With the approval of the city's building department, theater developers Harry J. Powers and William J. Davis opened the theater prematurely to take full advantage of the holiday crowds, ignoring flagrant safety violations in the process.

The aftermath of the fire proved to be a study in the miscarriage of justice. Despite overwhelming evidence that the building had not been completed, that fire safety laws were ignored, and that management had deliberately sealed off exits during the performance, no one was ever convicted or otherwise held accountable for the enormous loss of life.

Chicago Death Trap: The Iroquois Theatre Fire of 1903 is rich with vivid details about this horrific disaster, captivatingly presented in human terms without losing sight of the broader historical context.

“Brandt deftly lays out the story of a tragedy waiting to happen in a city with a corrupt government and greedy businessmen... Brandt's carefully documented, readable account reminds us what all the shouting was about.” ( Chicago Sun-Times)
“This superior piece of historical investigative journalism will keep readers turning the pages until the bitter end.” (Booklist)

Facinating Acount of a Great Tragedy

Where does Chicago Death Trap rank among all the audiobooks you’ve listened to so far?

One of the best.

What other book might you compare Chicago Death Trap to and why?

I would compare this to any of David McCullough's works. The author took a well known historic event and told what happened from many points of view so that you got the whole, real picture in the end.

Yes, on a long road trip.

The tragic events in this book are hard to hear about, but anyone intending to design or build public buildings should be required to listen or read it. The best way to prevent repeating bad history is to know about it.

Not just about the disaster

Would you listen to Chicago Death Trap again? Why?

Yes, it is a really interesting story (but very sad).

I loved all the historical detail about the theatre and its neighbourhood; it gave the story so much more interest than a straight description of the disaster.

One of the the very best accounts of the events and people who witnessed the events surrounding the 1903 Iroquois Theatre Fire. Touted as totally safe and fireproof by the promoters, the Iroquois Theatre was a fire-trap. Many changes to building safety evolved out of this terrible and tragic event. It is frightening to think of how quickly this fire spread and how little time there was to react at a very crowded theatre event, and to find the exits, which were mostly hidden or locked. A great review of everything that went wrong, the deficiencies in building safety, the miraculous stories of survival, and of those who helped others. Put together really well! A grim reminder to be aware of your surroundings at all times, and the fastest way out. So many people were impacted by this tragedy! Interestingly, the facts sound amazingly similar to The Station fire in Rhode Island in 2003 - 100 years later.

a book doesn't have many reviews. Rest assured, this is the case of an underrated gem. Very well constructed narrative. Loved it.

Well written and detailed account of this sadly forgotten incident. This book reveals the history behind many current fire and building codes. Hard to believe there have been so many similar tragedies since this event occurred. Greed, corruption, and myopic thinking are clearly not confined to the past.

A very compelling history to a rapidly changing United States. I did feel the Gary Regal's reading was slightly dry, but it doesn't detract from the writing.

The tragic fire that occurred in 1903 at the Iroquois Theatre in Chicago, killed over 600 people. It’s a heartbreaking story.

There were many illegal and deadly decisions made by individuals involved with the construction and managing of the theater. Doors were locked at the performances by the theater manager, fire exit signs were not installed, no fire sprinklers were installed, no fire suppression equipment, eg: fire extinguishers, were available. The list of the illegal code violations are detailed in the book.

I highly recommend this book.

Many details about the aftermath I didn't know. I found the way in which the trial unfolded quite intriguing.

It is amazing how far we have come as a society, yet how quick we are to place blame on others. Tragic story, people should read to see the importance of things we take for granted like exit signs simple door locks, occupancy loads.

Where does Chicago Death Trap rank among all the audiobooks you’ve listened to so far?

It is a chilling tail. All based on fact. I own the physical copy of this book. Hearing it read seams to bring the chilling piece of Chicago story to life. Its right up there next to the Woman In Back.

What other book might you compare Chicago Death Trap to, and why?

Its hard to think of another book that goes into such detail about Chicago and it' s theatre history. I would say that the book compares to 'The Tinder Box' By Anthony P. Hatch. It is regarding the same subject. However, this book goes into more detail and holds the reader in suspense. Also a big plus its on Audible

Which character – as performed by Gary Regal – was your favourite?

There are no characters in this book of historical depiction that I would say is my favourite.

This book is extremely informative and sad. It depicts the greatest Theatre disaster in american history ' The Iroquois Theatre built in 1902 - 1903 Chicago. The book goes into a lot of detail regarding the events surrounding the theatre and disaster. It also goes into detail about the social formalities of the city. overall the book will drive you to a tear or two.

Overall the book is very informative. It targets a specific audience, theatre technicians, history buffs etc. I do like the book and after extensive background work on the Iroquois Theatre Disaster for University my only wish would be that the audio version was available when I had to work through the mounds of reports.

This book covers the historical detail well. It starts by setting the scene at the turn of the century Chicago in terms of the city and the people in general. It describes the building of the theatre, the disaster itself and the after effects including trying to find someone to blame. The start of each chapter details a piece of fire code (regulation) in operation at the time. However, there is a real lack of personal and emotional depth to the writing.

What other book might you compare Chicago Death Trap to, and why?

The subject matter makes obvious comparisons with Stewart O'Nan's book about the big circus fire and Paul Benzaquin's 'Holocaust' about the nightclub fire at Cocoanut Grove in Boston. However what these other books do makes them far superior in my opinion. They focus on the people in the disaster. We learn about who they are, what led them to be involved in the disaster and what happened afterwards. These authors take time to make the reader care about characters whereas in The Iroquios Fire we are given lots of history and fire regulations, but very little personal detail. The sections about the horrific fire are done well and are emotional in places, but this is too brief. The disaster takes only about 2 hours of the 7.5 hours listening time.

It must be difficult to narrate such a horrific true story and the Narrator keeps a serious tone throughout. However this made it terribly dull to listen to. He also pauses at odd places sometimes and it sounds like he is reading to the end of line in a book and taking a pause, regardless of punctuation.

Overall this is worthwhile because it is true, it is history and we can realise how lucky we are today to be protected by rules and regulations that care for our safety. I didn't know anything about this disaster and so found it very educational, however it is a dull listen. I also felt that a more personal and human story could have been crafted from historical sources.