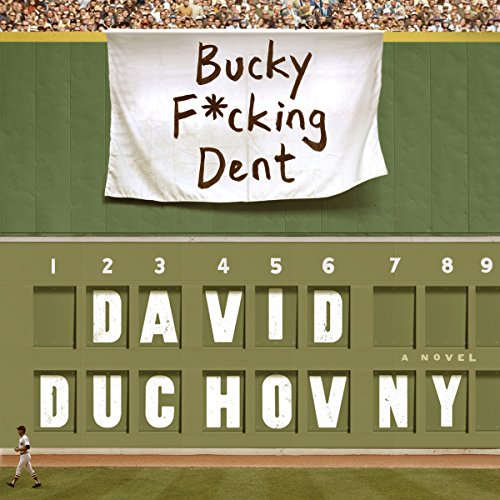 Ted Fullilove, aka Mr. Peanut, is not like other Ivy League grads. He shares an apartment with Goldberg, his beloved battery-operated fish, sleeps on a bed littered with yellow legal pads penned with what he hopes will be the next great American novel, and spends the waning malaise-filled days of the Carter administration at Yankee Stadium, waxing poetic while slinging peanuts to pay the rent.

When Ted hears the news that his estranged father, Marty, is dying of lung cancer, he immediately moves back into his childhood home, where a whirlwind of revelations ensues. The browbeating absentee father of his youth is living to make up for lost time, but his health dips drastically whenever his beloved Red Sox lose. And so, with help from a crew of neighborhood old-timers and the lovely Mariana - Marty's Nuyorican grief counselor - Ted orchestrates the illusion of a Sox winning streak, enabling Marty and the Red Sox to reverse the Curse of the Bambino and cruise their way to World Series victory. Well, sort of.

David Duchovny's richly drawn Bucky F*cking Dent is a story of the bond between fathers and sons, Yankee fans and the Fenway faithful, and grapples with the urgent need to find our story in an age of irony and artifice. Culminating in that fateful moment in October of '78 when the meek Bucky Dent hit his way into baseball history with the unlikeliest of home runs, this tragicomic audiobook demonstrates that life truly belongs to the losers - that the long shots are the ones worth betting on.

Bucky F*cking Dent is a singular tale that brims with the hilarity, poignancy, and profound solitude of modern life.

"Listeners will have no trouble discerning among curmudgeonly Marty, cynical Ted, and good-natured grief counselor Mariana. Nor will they lose interest in the character-driven tale while anticipating each witticism and relishing Duchovny's droll delivery. A highly recommended and essential addition to audio collections." - Booklist

I love it when men write about sport as a metaphor for life. For so many Fathers & Sons sport helps them talk, bond & get to know each other. David Duchovny writes about this brilliantly, & I was right there with him & his characters in this journey toward knowing your parent, forgiving the past & looking for a future & a way to make amends.

I loved the style of this book, 80 short, sharp chapters that made it feel a little like watching TV or following a baseball match.

I really enjoyed this darkly humoured tale of love and loss.
Well read by the author.

I took a trip to Louisiana and bought the audiobook for my plane ride there. I have never been one for audiobooks, but listening to this book in David's voice--the way he wanted you to read the book; every pause, every sigh. The book itself is amazing. The story is honestly so pure and good. But listening to it in David's voice brings so much more to the story. Good job, David. Good job.

A Home Run for Duchovny

A great story of family, love, loss, promise, and wit. Duchovny tells a tale spanning the history of a lifetime, two lifetimes really, in what is at once poignant and unapologetically deadpan.

Damn David, nice f*cking job. And here I thought you were just another pretty boy. Now I got to go call my dad. Keep swinging, you hit this one out of the park.

I especially love when the author reads his own book because it is the most pure rendering of what he intended. In this case Duchovny not only wrote an enjoyable novel, his reading made it even better for me.

I loved the flawed and endearing
characters. Knowing firsthand what losing a child feels like, I thought the author did a good job with the layers and colors of that emotion. Very strong performance by the author. I read the book awhile ago, but enjoyed hearing the story read to me!

I love this book - so much. Duchovny loves words and my pride can be a bit wounded by how much I need to look up certain references, but he makes up for it by so many hilarious bits of misunderstanding and clumsiness that comes from his protagonist’s self-loathing and lack serious game. The prose can be a bit, um, verbose? But once you find the characters’ vibes, it’s a sort of devastatingly moving father-son cuss-fest love story that will stay with me for a long time. Enjoy!

Holy shit this was one of the best books ever. And 1000% enhanced by David Duchovny’s narration. We laughed, and cried, and thoroughly enjoyed ourselves. 💯🧡

My first by David and I’m glad I listened. It wasn’t exactly what I thought the book was but it was awesome listen.

I F*cking loved this book.

I laughed, I cried, I want to do it all again. I loved everything about it.

I loved this book. The father and son relationship was a beautiful mess. And having David Duchovny read it made the pacing and tone feel incredible.

Finished this one today and have to say it’s a beautiful little gem, David Duchovny has done brilliantly with the writing and narration. It’s a very fast pace read, listen, funny in places I was literally laughing out loud often. The characters feel really well depicted you could almost know them. Five stars from me and looking forward to more.

Disclosure: I came to this book not even really knowing if Bucky Dent was a real person or a fictional creation. I have little interest in reading sports, and even less so when that sport is baseball. I am however a big fan of David Duchovny's writing after having read his first book 'Holy Cow' so this would be the difficult second novel for him in my eyes. Could Duchovny's wit and repartee really help me care about baseball?

In short, yes. But Bucky F**king Dent is no sport story. The beaten and cynical heart of the book is the love story between estranged father and son as they deal with cancer. There's not much more I'd care to really disclose about the plot as this is a book that's all about the journey, paved with darkness - both emotional and its sense of humour.

Perfect for anyone who's ever felt like a lost cause on the search for meaning in life. It can't pay off with the answers, but that doesn't mean it's not a satisfying road to take regardless.

I'd probably have appreciated Bucky f**king Dent that bit more were I a sports fan, but even with that bias against it, I found this one I kept trying to make excuses to come back to it for just a little more.

Audiobook Only: It should be no surprise that Duchovny can breathe real life into the characters here; his own personal peppered dialogue already well tailored to his personal voice. And it is in audiobook where the narrator really comes to life and some of the more elongated tangents flow smoother in his own voice than it does as text.

What was one of the most memorable moments of Bucky F*cking Dent?

"It made her sad to know that she would never fall in love or make babies, but she didn't really even know what it was that she would be missing. It was more like ideas of loss the adults, movies and stories had put upon her."