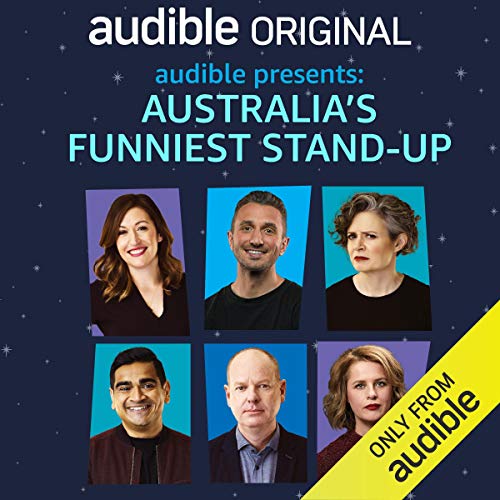 At a time when live comedy has never been harder to find you’ve come to absolutely the right place. Audible Presents: Australia's Funniest Stand-Up features six of our most awarded and best-loved Australian comedians doing what they do best, making people laugh in their own, unique ways. Originally recorded live at the Malthouse Theatre in Melbourne, the stand-up specials are also available to watch on Amazon Prime Video.

This is an Audible Original Podcast. You can download all 6 episodes to your Library now:

A true Australian comedy luminary, Celia Pacquola is sharp, frank and smart as hell, a multiple award-winning writer-performer. The stand-up stage is where the journey began for Celia and it’s where she happily returns in the triumphant All Talk.

Single again, Judith concludes that maybe it’s time to shut up shop. “Whatever it is that I’m selling, a lot of straight men simply aren’t interested in buying it.” In this show Jude recounts her history with the opposite sex and asks the audience: Should she hang up her vagina for good?

2019 Gold Logie winner. Chief celebrity interrogator. Host of the highest-rating quiz show on TV. There’s not much Tom Gleeson hasn’t been up to lately. One of the sharpest minds in Australian comedy, his shows are relentlessly hilarious. Experience him live on stage, in his natural habitat and in the form of his life. Taste the JOY.

Anne Edmonds: What’s Wrong With You?

Welcome to the debut special of Australian’s newest comedy rock star. Anne Edmonds is an unparalleled observer of the simmering tensions of everyday suburban life. In just one hour, she’s going to tell you what’s wrong with you and everyone else.

Sri Lankan-born Dilruk Jayasinha is one of the most in-demand headliners on the Australian scene. His small-screen star continues to soar thanks to his appearances in Utopia and Have You Been Paying Attention? but it is on stage that the full breadth of his talent is most obvious. A positive, upbeat stand-up, he’ll leave you feeling better about yourself and the world.

Idiot or genius? Sometimes the line between the two is very thin, as the irrepressible Tommy Little shows in this raucous hour of stand-up. Would an idiot sign up to run an Antarctic marathon with no previous experience or training? Find out in this incredible tale of one man against the odds.

Seriously if you are going to have content that talks about sexual assault and rape as 'comedy' you NEED to put a disclaimer at the beginning of that episode! *Celia Pacquola's bit was very triggering.

Judith Lucy let down the line up

So embarrassing to listen to Judith Lucy. If the script was flipped and a man rubbished women the way she does there would be an outcry. Time to update your material.

Six great stand up comedians. Just what I needed at this time. Some of the issues discussed are quite confronting. Don't listen if you are into political correctness. Whether the comedians crossed the line is up to you to decide. I enjoyed it.

Very much in need of a laugh right now and this absolutely delivered, loved it.

don't watch with your child asleep near you. you will laugh loudly and risk waking them.

All are great but Anne Edmonds is absolutely hilarious from beginning to end. An absolute stand out.

If you need cheering up or just enjoy being entertained with good laughs then this Audible compilation of Australian comedy is for you. Works well without having to visually see the comedians. Maybe they can make more like this. Keep the Lols coming!

The audio mixing is great, the sound of the crowd doesn't drown out the comic like some other audiobooks/podcasts. Fun lineup!

Stand up comedy in your pocket! Loved this - and so many of my fav comedians... and now some new faves! Well done team!

Very funny Aussie comedians made me laugh out loud

Except Tom Gleeson, he is not funny because of the big chip on his shoulder.

This was one of the best comedy postcast I've ever listen to. People asking me me if I was OK as I was crying so much. I never thought female comedian's are that funny but the ladies are just outstanding comedians belly laughter crying at one point. Would of given this 6 stars if available.

we need more like this!!! keep this up and make more! and try a different country, Australias annoying

worth listening to. whether just to pass the time or to have a laugh if you want

Really funny although the women were a lot funnier than the men in this instance. Easier to say that than write names down.

Best comedy I've heard for years. Especially enjoyed Anne Edmonds, as will anyone with a care plan! Dilruk Jayasinha also stood out for me. All were a good laugh.

So very smart and so very funny.

I enjoyed every minute even if the subject matter was not so comfortable. Superb timing, delivery and loops around to earlier stories. One of the best acts I've seen/heard.

Only two hit my funny bone

Not all to my taste but the host and Tommy Little are just brilliant! See for yourself

Definitely worth a listen! She’ll make you laugh, cry and probably pass a little wind too.

brilliant havent laughed so much

really cheered me up listening they were all so funny kept me entertained for hours. I just didn't want to stop listening

I listen to these whilst in work as it’s mind numbingly boring so instead of music I like a bit of comedy. This was a mistake to listen to in work!! I laughed sooo much people started glaring and I think they thought I was crying, I was but in hysteria! Can’t wait to find other shows of his to listen to he’s my new fave comedian next to bill burr.