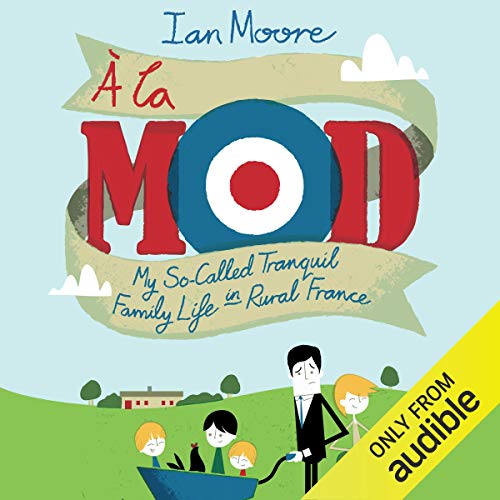 Ian Moore is a stand-up comedian in the UK and a husband, father of three boys, farmhand and chutney-maker in France. He is a mod in both walks of life and most of his time is spent travelling grumpily between the two. Comedian, mod and professional grump Ian Moore has had enough. Tired of being unable to park anywhere near his cramped house in a noisy town he doesn’t like, he hatches a plan to move his wife and young son to a remote corner of the Loire Valley in search of serenity and space.

Several years later, Ian finds himself up to his neck in bilingual offspring, feral cats, promiscuous horses, dysfunctional spaniels and needy hens; he’s wrestling with electric fences, a foreign language, a mountain of animal waste and a wife who collects livestock like there’s a biblical flood on the horizon, all while trying not to dirty his loafers.

But despite the ups, downs and increasing demands of Ian’s showbiz career, the Moore family persevere in true Brit style to create a unique, colourful and ultimately rewarding life in their new home - a la campagne and a la mod!

"I hate mods, I hate France and I hate reading but I still loved this book." (Lee Mack, comedian)

tale of ex pat Brit in France with a Parka & pets

What did you like most about À La Mod?

Realistic overview of many problems encountered by a ex Pat moving to but not working in France. Loved the less than glamorous travel options he had to use in order to make the life economically viable. Great descriptions of the local customs and rubbish disposal options.

What was one of the most memorable moments of À La Mod?

This has to be the family's attempts to sell bric a brac at the French equivalent of a car boot sale - only to end up taking more home than they brought.

Reading his own story, Ian Moore brings just the right balance of emotion and dry wry humour to the book

I chose this title as I’ve had a desire to up sticks and move to France for as long as I can remember. With Ian being a fellow Englishman I figured that the book would provide some encouragement and insight.

Ian, despite making his living in stand up, is a remarkably well accomplished writer and narrator. His comedy timing shines through occasionally and will have you actually laughing out loud at several points throughout. The theme park suggestion during the car licensing chapter being a stand out moment.

Ian leaves you feeling like you know him and his family to the point where you feel you could sit down with him and Natalie and share a glass or two of wine and feel like they’re old friends.

I’ve just bought C’est Magnifique which is the second book in the series, so, should you see a middle aged man in a blue Jag laughing to himself whilst in traffic then don’t be alarmed.

Where does À La Mod rank among all the audiobooks you’ve listened to so far?

This is a great audiobook. Its 'feelgood', light, funny and endearing. I very quickly felt like I knew all of the family. Even half way in, I knew I would listen to this book again. Ideal relaxation.

What was one of the most memorable moments of À La Mod?

Which character – as performed by Ian Moore – was your favourite?

Where does À La Mod rank among all the audiobooks you’ve listened to so far?

We chose it to listen to as a family in the car and we have all absolutely loved it.

What other book might you compare À La Mod to, and why?

What does Ian Moore bring to the story that you wouldn’t experience if you had only read the book?

His tone of voice beautifully illustrates his circumstances and his warmth when reading about his family is delightful.

We gave it a fair shot. As soon as we got in the car for the next leg of our journey the cry went up, 'put the book on!'

We were able to relate to the book, being amateur rural dwellers ourselves. It's a lovely book about the life and it's challenges that made us giggle and guffaw.

Probably not, I rated this book as interestring, but, so many better books out there that I would recommend.

If the author was more descriptive of the obviously wonderful area of France in which he lived. It felt like the author just scraped the surface.

Could you see À La Mod being made into a movie or a TV series? Who would the stars be?

No, not really, not this book.

Great story of a family settling into French life, great humour, well narrated, then to find out there is another book.... Already in my basket!

Trying to be cool about it, but its excellent.

Loved this book the first time I read it and now having listened to Monsieur Moore read it himself, I love it even more. The follow up is fantastic as well.

To be honest, probably the worst book on audible that I ever kept without getting a refund.

A great story read by an excellent storyteller. I kept wanting to know what would happen next and there was none of the tweeness or 'stupid foreigner abroad' you often get in such tales. On to the followup!

Loved this book and its narration

I loved this book and it's companion volume 'Ce't Modnifique' - they were both such a wonderful surprise. The narration is excellent - I was not aware of Ian Moore as a stand-up comedian but his voice is perfect for telling the amusing and moving story of his family's life France and the various animals they adopt. I would recommend this to anyone.
It is not a twee 'we moved to France' book - it is a down to earth amusing read.