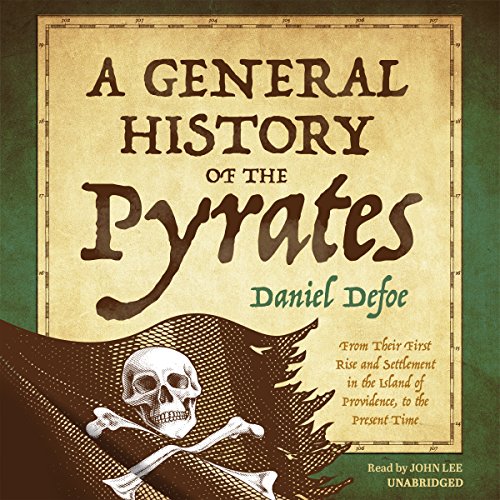 A General History of the Pyrates

From Their First Rise and Settlement in the Island of Providence, to the Present Time
By: Daniel Defoe
Narrated by: John Lee
Length: 12 hrs and 10 mins
Categories: History, World
4 out of 5 stars 4.0 (1 rating)

A General History of the Pyrates

"I presume we need make no Apology for giving the Name of a History to the following Sheets, though they contain nothing but the Actions of a Parcel of Robbers." (From the book)

This work was published in 1724, under the pseudonym Captain Charles Johnson, by an unknown British author, usually assumed to be Daniel Defoe. This work is the prime source for the biographies of many well-known pirates of that era and shaped the popular notions about pirates of the day. Included are Blackbeard, Black Bart, Jolly Roger, Anne Bonny (aka Anne Bonn), Edward Teach, Henry Avery, Mary Read, and many more.

Anyone with burgeoning interest in the golden age pirates and the era in which they lived and worked should give this a listen. The language is now three hundred years old and all the more fascinating for it, providing a vital insight into how an authority of the time viewed pirates.

-One can only imagine how fascinated the people of London were by the subjects of this book, although that seems contrary to Captain Johnson's intention.

-It should be noted that the book is attributed to a Captain Charles Johnson, and that whether or not that was a pseudonym we hardly have enough evidence to authoritatively claim it was written by Daniel Defoe.

Horrendous Waste of John Lee’s Time and Ours

This book was written in 1724 and the language used is arcane English. The book here is credited to Daniel Defoe (author of Robinson Crusoe) but any quick Google search will show that the authorship of this work is very much in dispute. It supposedly recounts the true story of legendary pirates but it’s clearly full of fiction and the reader will likely see it a a simple work of an early 18th century publisher to make a buck. John Lee is one of the best narrators around, and his work has always made written pages come alive; however, with this effort, it sounds as if he’s rushing to finish the almost indecipherable script to get onto his next more meaningful work. Sadly this book is a total waste of his time and ours,

The book is great for those interested in pirates. I have to disagree with the other review regarding narration, I thought it was horrendous and could only listen to so much at a time because it was so bland. After a while it became irritating, it didn't flow at all. It also sounds like his voice has been edited to hasten the reading speed, which a friend also thought when I played a snippet to him. Makes it difficult to follow the story because it moves from sentence to sentence so fast with hardly any pause.

I think the majority of people interested in this book would enjoy a printed version more than this specific audiobook.

Cant get passed the narrator..

I've had to switch to the book itself because I cannot get past the narrator of this audiobook. It almost sounds as if the narrator struggles to articulate the Early Modern English sentencing. Stories blend into each other due to lack of proper pauses and other times there are pauses mid sentence that disrupt the flow and overall immersion of the book.

If you can get past the narrators battle with Tudor English then you will enjoy this. Having since switched to the book itself, it's an awesome read for anyone interested in the truths and tails of maritime past.

Great historical read if you're interested in the pirates from the 18th century, and maritime culture in general from that time.

A well-read classic of maritime history

This is a wonderful book which has been excellently reproduced here as an audiobook. I would certainly have issued a full 5 star rating but for a handful of minor gripes. None of these, however, are with the book itself and so feel somewhat harsh and academic. Perhaps, if I were able, I could issue a 4.5 star rating?... Nevertheless, the criticisms are worth a mention.

Given the popularity of the subject and the vast number of books published, there is a notable scarcity of audiobooks on piracy. The fact that this book has not only made it into the Audible collection, but has been so well read by John Lee, is both welcome and pleasing. It is, for sure, an absolute classic which anyone with any kind of interest in the Pirates of the Golden Age ought to invest. It is true that, being first published in 1724, the vernacular can be a little difficult at times, but it is both written, and now read, with such expertise that it may be listened to with ease. In fact, it is this very thing which lends this book so well to this format as, despite the quality of writing, on paper it can be occasionally awkward and hard to fully comprehend for modern readers, but John Lee's delivery is such that the content is instantly accessible to all.

For those who are intrigued by Golden Age Pirates and have not yet tackled Captain Charles Johnson's "General History", this is essential listening, and the slightly dated English of the 18th Century should in no way put you off. Actually, it is this which lends the book real authenticity and truly allows you to indulge your imagination and brings these many great, nefarious characters from history to life. Each chapter addresses a particular Pirate Captain, beginning with the infamous Captain Avery and his legendary attack on the Mughal fleet and ending with Captain Spriggs, with 16 other filibusters in between including Captain Edward Teach, alias Blackbeard, Captains 'Calico' Jack Rackham, Charles Vane and the notorious 'Black Bart' Roberts, as well as the lives of two pirate women, Anne Bonny and Mary Read. Also, complimenting the 18 biographies there are contemporary descriptions of some the islands and settlements inhabited by these freebooters and also an account of the trials of the Pirate crew of Bartholomew Roberts.

It is in a large part thanks to this very book, written virtually in concurrence with the actual events, that we know much of these characters and their dubious exploits at all. It is hugely influential and, on top of being a mere historical record, A General History of Pyrates is cited as being the main inspiration for, among others, Robert Louis Stevenson and his literary classic work of fiction, Treasure Island, and is therefore responsible for both our understanding of actual, real life pirates and their dastardly deeds and for our modern, fantastical interpretation such as that represented by Disney and the ubiquitous Jack Sparrow, aaarrrrgggghh!

So, why not all 5 stars? Well, there are a few reasons, mainly to do with how it has been listed. Firstly, there were several editions published of A General History, each one adding new biographies to that which had come before. What has been released here is the first edition, which is a shame in itself as it excludes those biographies of later editions such as that of Captain William Kidd, or that of 'Black Sam' Bellamy, but, more importantly, it makes no reference to that fact in it's title. As such you may very well purchase the audiobook in the expectation that it does include those extra accounts of the 2nd and 3rd editions and, if so, you may find yourself disappointed. That is possibly the biggest problem with this version, but nevertheless there is, at over 12 hours long, still plenty to be listening and quite reasonably priced to boot! It ought to be said that, if the full content of the 3rd edition had been included then the length could easily have exceeded 24hours and would therefore have potentially cost twice as much! It would still have been thoughtful of them to mention precisely what you are buying however...

My other grumble, from which you will be unaffected if you are reading this review, is over how this audio book has been catalogued. Given the popularity of this book and its topic in general, I am shocked to find myself the first to leave either a review or rating. I surely cannot be the first to have made the purchase? It is perhaps less surprising when I think of how long it took me to locate it in Audible's library, especially as I only happened upon it by chance. I am greatly interested in this subject and I do regular searches of Audible's database for anything which covers "Pirates", yet this fundamental reading was nowhere to be found. I had previously read the book and so had even attempted a search for "A General History of Pyrates", yet even that accuracy, bizarrely, returns nothing in Audible's engine. It was only when I conducted a search for "Daniel Defoe", and then scrolled through 4 pages of Robinson Crusoe and Moll Flanders, did I stumble into it. Naturally, I was thrilled but a little frustrated given that since the late 1980s Daniel Defoe's name has been removed and the authorship of A General History of Pyrates has been returned to Captain Charles Johnson. Basically, that means that unless you are either a Defoe fanatic and seek all his works, be they in reality by him or not, or extremely fortuitous and fall into it entirely by fluke, or you are living in a time warp whereby your calendar is 35 years out of date, this iconic piece of maritime literature will remain unheard, and that is a great shame to both Captain Johnson (whoever he may be) and John Lee, who does such a brilliant job as narrator

If you should manage to discover this audiobook I can highly recommend it!