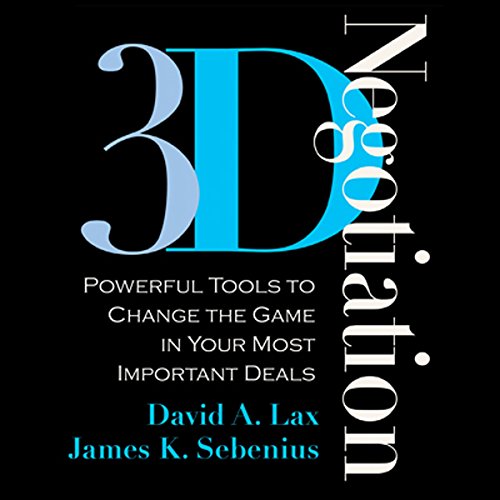 Powerful Tools to Change the Game in Your Most Important Deals
By: David A. Lax, James K. Sebenius
Narrated by: Barrett Whitener
Length: 10 hrs and 7 mins
Categories: Business, Career Skills
5 out of 5 stars 5.0 (1 rating)

By: David A. Lax,James K. Sebenius
Narrated by: Barrett Whitener

Stuck in a "win-win versus win-lose" mind-set, most negotiators focus on the face-to-face process at the table. In 3-D Negotiation, David Lax and James Sebenius urge bargainers to look beyond tactics at the table. Persuasive tactics are only the "first dimension" of the authors' path-breaking approach, developed from their decades of doing deals and analyzing great dealmakers. Through moves in the "second dimension", deal design, 3-D negotiators know how to unlock economic and noneconomic value by systematically envisioning and creatively structuring agreements.

But what really sets the 3-D approach apart, is its "third dimension", is setup. Before showing up at a bargaining session, 3-D negotiators "set the table" by arranging the most promising possible situation - laying the groundwork for adroit tactical interplay later. Acting away from the table, the bargainers ensure that the right parties have been approached in the right sequence, to deal with the right issues, engaging the right set of interests, at the right table, at the right time, under the right expectations, and facing the right no-deal options. This new arsenal of moves away from the table often exerts the greatest impact on the negotiated outcome.

Packed with practical steps and engaging examples, 3-D Negotiation enables you to reach remarkable agreements once you arrive at the table - deals that would be unattainable by standard tactics, no matter how skilful.

Narrator turns this awesome book into a total dud

When listening to an audiobook, I need to feel the narrators passion in order to get much out of the book. If they gave try-outs for the narrator, they picked the guy in dead last. That being said, I do feel that the content of the book, if it were to be read by someone else, would make for a great book. So buy a hard copy and have your spouse read it to you. (unless your married to the current narrator)

Could be a much better audiobook

I think the concepts are pretty good in this book, but I believe the author takes himself way too seriously and has allowed raw academic language to get in the way. On top of that, the narration is good, but more suited for a fiction book. From listening to the long winded phrasing in abstract terms, and the dramatic voice, it's very easy to get distracted by the delivery and not focus on what the author is trying to say. The listeners with a highly academic background might be ok with this book, but I'd say that it needs a rewrite in a much more comprehensible format for the general public.

Machine narration is just terrible, I can't even listen to this for a minute. I wish I cold get my money back.

It's a pity narration doesn't make justice to book quality.

An Excellent Book on Negotiations

Excellent book on negotiations. This book focuses on the bigger picture, setting the stage, getting the right players and groups involved (government officials, trade unions, etc.) in an effort to expand negotiations beyond the table and orchestrate a win-win value creating deal.

There is a healthy use of real world cases and the authors were involved in most of them. The case analysis is relevant and insightful.

The book itself is excellent. The explanation of 3-D negotiating is excellent. The only single flaw is the monotone reader read's a dynamic topic so dry that this has a powerful influence over the listener , which makes it hard to stay alert. Luckily the content is interesting enough to make it through in order to learn these wonderful lessons.

This was my first audible purchase. This was not even narrated, it was computer generated narration. Impossible to listen to. I ended up purchasing the physical book because I couldn't make it passed the first chapter. After "reading" the book, it was an amazing book. A little gimmicky with the words and terms, but the principles hold true regardless on how the authors describe them. I had heard such good things about audible, it's really too bad. I would recommend purchasing the physical book for this one. Skip the audio version.

Excellent Listen before your next big meeting.

Listening before your next big meeting or interview will take your focus to a higher level making you more calm and ready for what comes at you. Goes beyond the standard win-win negotiation advice.

Not sure is the narrator is a robot

This books conditions you to look at negotiation as an entrepreneurial venture with many levers and moving parts to be set before any tactical face-to-face meeting.

Barrett Whitener’s delivery is monotonous and dreadful excepts when he narrates statements made by characters in the book. Only then, there are some voice intonations.

I've got the actual book and its amazing, however I can't listen to the narrator on this Audiobook.

Flat, monotone reading made this hard to listen to

I can't speak for the content as I found it difficult to get passed the narrators style. Just didn't work for me

voice took some getting used to :p.. overall great book. Key lesson always do your homework and think of the other sides perspective