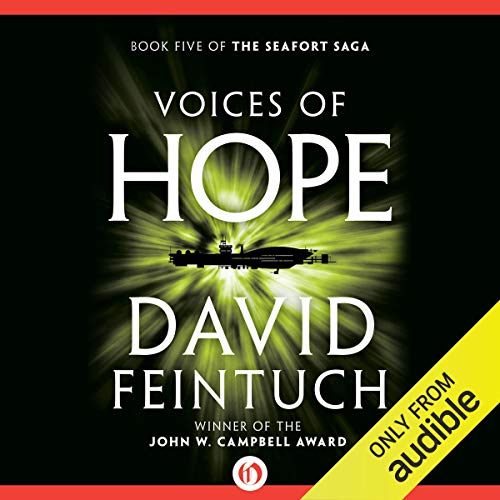 Decades have passed since Nick Seafort battled the vicious aliens. Now, in the fifth installment of the celebrated Seafort Saga, it's trouble on Earth that looms.... Everyone knows Nick Seafort as The Fisherman - the hero who stopped the merciless, fishlike aliens when they attacked Earth. Voices of Hope picks up with Seafort decades later, after he's retired as the secretary general of the United Nations. Despite his trappings of power, he has been unable to aid the so-called transpops, desperate people who live in the dangerous lower levels of New York City. When Seafort's son, Philip, follows a friend into the streets of New York, he encounters the transpop culture - one evolved to exist in the shadows and operate with ruthless efficiency. The trannies are a powder keg ready to blow, and a water shortage appears to be the spark to prove that humans can be far more dangerous than any outer-space alien. Long ago Seafort had braved these violent streets to find his wife; now he must return to save his son.

I liked the other series better

As you can read in the description of this book it takes place decades after the war with the fish-like aliens. What it doesn’t say is that Nick Seafort is merely a supporting character in this new series. Probably 80% of the book is written first hand from the tranny perspective, complete with the language and the “take what you want” mentality. Apart from the few cameos Nick Seafort makes, the rest is written in the perspective of his son and son’s friend.

I know I will probably be alone in this, but I spent most of the book thinking to myself, “I don’t get it”. As I mentioned the majority of the book is written in the tranny… sorry, transpop perspective where if you want something you take it and life has little to no value. When the evil upies are trying to redevelop the land these gangbangers have been squatting on and even worse turn off the water they have been stealing, we are suppose to be outraged? The trannys whole life revolves around taking turf, food or people/food (I know I said food twice but they eat people so it works) whenever they can so where exactly is the basis for their outrage?

The narrator is new to the series but since this series is pretty much a new one I guess that is alright as far as continuity is concerned. However, where he does a good job reading all the tranny parts and adding a good Jamaican type dialect, he makes all the upie kids sound... um... feminine.

As far as the rest of the book, if you can get past the social hypocrisy it is well written and tells a complete story.

No, not this part in the series.

I was so disappointed. I kept wondering what was happening and if I had missed something in the last book or skipped one all together. And then I kept waiting for Nick to wake up from this dream he seemed to be dreaming. Time dilation please! Didn't happen. I'm still half way and can't make myself read more and it's been two months so I had to move on.

Unlike some, I thought the "tranny" language was easy to understand and added a lot to the experience. Though it'll be a week before I stop thinking in it.
The part that was annoying for me was the skiing analogy for hacking, it worked to help describe what was going on but no way anybody really speak like that. Okay okay okay, maybe that movie Hackers but no real joeys not now, maybe future, we see, film at 'leven.

I enjoyed the book a lot as some reviews hadnt been great but this book 5 of 6. I know that some people feel that Nick Seaforth was depressed all the time. The story follows in a logical order.