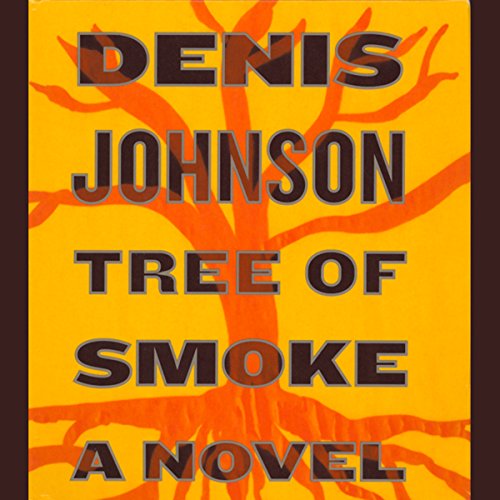 By: Denis Johnson
Narrated by: Will Patton

This is the story of William "Skip" Sands, CIA, engaged in psychological operations against the Vietcong, and the disasters that befall him. This is also the story of the Houston brothers, Bill and James, young men who drift out of the Arizona desert and into a war in which the line between disinformation and delusion has blurred away. In its vision of human folly, this is a story like nothing in our literature.
©2007 Denis Johnson (P)2007 Audio Renaissance, a division of Holtzbrinck Publishers LLC

"Prose of amazing power and stylishness." (Philip Roth)
"The God I want to believe in has a voice and a sense of humor like Denis Johnson's." (Jonathan Franzen)
"Once Johnson gets his hooks into you, it takes about two sentences, it's...pretty much impossible to stop reading." (The New York Times Book Review)

i rarely make comments but feel compelled to do so here. i was first made aware of this book in the new york times. the review was the most favorable that i can ever remember reading. i then saw the one star reviews here and very nearly didn't order the book. that would have been a huge mistake. i don't expect to ever see tom cruise starring in the movie version of this book and if you are drawn to books that are paced in that way, you will likely be disappointed. however, if beauty of language, compelling imagery, and depth of character appeal to you, allow yourself to be immersed in the depth of this incredible tale.

Moves one irrevocably into the degradation of war. Particularly this war, Viet Nam. A difficult book to get over. Perhaps I'm damaged now...certainly not the same. Grateful to Denis Johnson.

Not since Moby Dick have I encountered a novel that will engage you on a gut-wrenching visceral level of realism and then slide you gently into a meditation of metaphysical matters, and then bam! back into realism. And just as literature students debate endlessly the meaning of Ahab's obsessions and Ishmael's salvation, so too will future generations have the pleasure of deciphering Johnson's challenge: what are we to make of his tree of smoke, his birth-canal tunnels, his Catholic priests of lost faith, his monks of lost purpose, his missionaries crushed by Calvinism, his psy-op warriors on the edge where "reality becomes the dream" and who become the final "compensator"? These are not easy threads to link into a unified vision, but the Johnson is throwing down a big challenge to his reader to pay attention to these underlying concerns and not merely ride the more surface story. But that is not easy either because oh what a surface story it is-amazingly poetical, with never a lazy sentence, with dialogue that crackles, and characters who will stick in your memory. It is true that the surface plot about the Colonel's plans takes an abrupt turn and seems not to matter any more, but what does matter is where the characters are going, and we are allowed to follow all of them--each to their surprising and satisfying journey's end. No one reads Moby Dick just to learn about whaling practices, so too no one should read "Tree of Smoke" just to learn about why we were in Vietnam. What Johnson's metaphysical message is, I have not come to terms with yet, but I love the challenge he has given us. And the narrator, Will Patton, gives a reading that is poignant to the point of raising the hairs on your neck. What a ride, what a ride, what a ride.

Exceptional writing and narration. Will Patton is phenomenal, it sounds as if the writer wrote this for Patton to read. This is an epic work of the human spirit. The vietnam war is only a background, in this one. The story is not confined by mere historical facts. I think some of the reviewers must have come into this wanting a Vietnam War story. The battles this work explores rage in the hearts of its characters and if you are listening/hearing probably your own.

This IS non-linear/stream of consciousness writing but I was able to keep up with the intended story. I laughed and cried, but don't think this is a sentimental comedy. Very few books have affected me this deeply. I predict this will be in our educational canon. After listening to the audiobook, I purchased the book ... at times I just open it randomly and fall in.

A great read that is worth the effort

This book got a great review in the NY Times and readily deserved it. I was surprised to see so many negative reviews on Audible and as a result waited to download it. I am glad that I finally did. In fact I liked it so much that I listened to it twice (back to back) a feat that I only performed once before (David Mitchell's Cloud Atlas).

In defense of the previous reviewers this book presents some challenges to the reader: it has a lot of characters (many of whom adopt nicknames); it jumps around in sequence somewhat; and it lives up to its name (much is implied rather than fully stated).

In defense of the book it is beautifully written, gives lots to reflect on and is a fascinating story to boot. Although it is set in part in Vietnam during the war it is not about the war. It is a spiritual journey through eyes of some pretty interesting characters set against the backdrop of the war. It is hard to describe why it works but it does.

I really liked this novel and I thought the narrator did a good job, too.

I'll admit it, it's not an easy novel to swallow. The plot lines roam about and the over-arching logic is elusive. It's not a typically structured novel. It's more like if Thomas Pynchon or Don Delillo wrote a novel about Psy-Ops in Vietnam. Denis Johnson has his own distinctive voice, but the winding and sometimes paranoid logic reminds me of those authors. The novel explores some very dark themes concerning war and truth and spirituality. And it doesn't pull any punches when it comes to action or language.

The narrator skillfully navigated the difficult text and provided unique voice to the characters in a way that, quite honestly, didn't annoy me at all. Just so you know though, the narrator tries to sort of play different characters.

Still disturbing after all this time

Missed the original and want to experience the Viet Nam war? Denis Johnson does a remarkable job of recreating this psychotic episode in American history. If you're looking for understanding, you might not find it here -- though the forest spirit hypothesis works for me. If you're looking for closure, I'd look elsewhere.

My rating reflects the audiobook, not the book itself. I think that Tree of Smoke might be a very good book to read, but it is a difficult book to listen to. It's not the narrator's fault: he does a superb job of capturing the mood and aiding in characterization.

I'm a big reader, and I like marking in important books. I like underlining important, repeated phrases and flipping back to earlier passages when I sense the author making allusions. I kept wanting to do this with Tree of Smoke, but I couldn't! Specifically, I remember a significant folk tale that is related early in the book that may be a key to understanding the whole, but it occurred so early in this rather long book that I couldn't remember the details of the tale by the end of the book. I needed to be able to flip back and read the folk tale again!

Here's the upshot of my too long review: I would recommend that someone read this book, but I do not recommend the audiobook.

I resist war stories but after finally buckling down and reading and loving Tim O'Brien's short story collection "What They Carried With Them" and after reading the strong reviews for Denis Johnson's book in the NYTBR, I wanted to listen to "Tree of Smoke. For me, the emotional resonance that O'Brien's work "Carried" remains untrumped. "Tree of Smoke" is a good book butI did not think was a GREAT Book. It merits reading, and I may read it again to make sure I've given it a fair shake.

But here are my issues -- the "Tree of Smoke" itself-- not subtle. Not heavy-handed, but close. I remember wondering at one time if an editor made the author hammer home the "Tree of Smoke" symbolism -- wondered if he or the readers may not pick up on it if mentioned just once or twice...hard not to catch on when that's how the book is titled!

The characters -- if a compelling character who lives in your heart and soul is worth five stars, these are four star characters. Not one of them seeps into the heart/mind of the reader-- they almost do, each of them, but not quite.

The book is well constructed, the narrator of this book is superb. But I wanted to be "blown away"by this book based on what I knew of the author and the reviews and I wasn't. All that being said, I think it's imprtant for people like me who resist war novels to read books like this, it's important for people like me to understand...what came before, and what they carried with them.

When I began listening to this book, it took me an hour to get into the rhythm and pacing, but when I became accustomed to it, it blew me away. Will Patton has perfectly captured the emotion of the characters and even though I knew how it would end, I wish the story had not. If you are looking for something different and unique, choose this one.

I had to jump in having seen the other reviews here. The novel is not disjointed, it is deliberately non-linear and I had no trouble following it. Also I find the narrator, Will Patton to be one of my favourite narrators having discovered this book through his work on various James Lee Burke novels and find his work uniformly excellent

I agree with Tony - this book is dreadful; how on earth it got the reviews it did god knows. I stuck through it right to the bitter end and wasted several hours of my life. The story is totally disjointed - very poor indeed. The reader seems to think he's Marlon Brando and reads in a mafia style whisper which adds atmosphere - when nothing much is happening. Even if the story had been shortened to about one third it would still be a waste of time. The last time I listen to an audible book when I go by the reviews.

Possibly the worst talking book I have ever tried to listen too.
The plot leaps about all over the place you cannot get a grasp of what time period or which character the book is talking about. Far to deep everyone seems to be dreaming or on illegal substances, one or the other. After 3 hours I gave up and got more pleasure studying the inside of an egg shell.