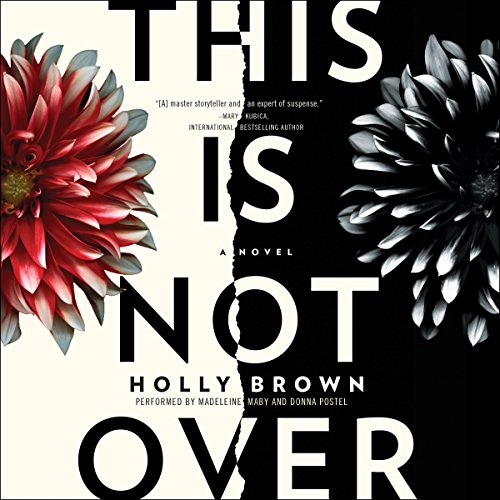 This Is Not Over

This Is Not Over

You'll have your deposit within seven business days, just like it says on Getaway.com. I've put through a refund to your credit card for the full amount, minus $200 to replace the stained sheets.

When 30-year-old Dawn reads Miranda's email, she sees red. People have always told Dawn she's beautiful, and she just hopes they don't see beneath - to how she grew up, to what she's always tried to outrun. She revels in her getaways with her perfect (maybe too perfect) husband, the occasional long weekend in luxurious homes, temporarily inhabiting other people's privileged lives. Miranda's email strikes a nerve, with its lying intimation that Dawn is so dirty you need to throw out her sheets.

Beware of your "host"

I wouldn't have left a review at all if I didn't feel it was my civic duty to warn others.

Fifty-seven-year-old Miranda thought she'd seen it all, but she can't believe her eyes when she reads Dawn's review. She's a doctor's wife but she needs that rental money desperately. People might think her life is privileged, but they don't know what's really going on. They don't know about her son. She won't take this threat to her livelihood - to her very life - lying down.

Two very different women with this in common: Each harbors her own secret, her own reason why she can't just let this go. Neither can yield, not before they've dredged up all that's hidden, even if it has the power to shatter all they've built.

This is not over.

This is so not over.

Yes, this book is literally about an online review from a guest to the host of a vacation rental property. And somehow the author is able to create twists and turns and develop complex characters. I really like how I was never led on to think the story was going a certain way -- all the elements in the story are very relevant and concise. I very much appreciate the way the story constantly kept coming together and every detail was meaningful all the way to the end. It maintained my interest the entire time and I do recommend this book.

A Tale of Two Women

I would absolutely recommend this book to a friend. It was different from most books I have read, and I read 3-5 books a week. This fictional story is about how misunderstandings effect lives.

This question is hard to answer. Both women were people I loved and hated at the same time. I saw both sides and became aggravated at them both. Comparable to the soap opera stars, the one everybody loves to hate, maybe.

When one figures out her husband wasn't who she thought. Nothing more to say, or I would give too much away.

There are a couple of parts that were sad for me, as a mother.

I wasn't sure what to expect from this book, but have been trying to branch out from the genres I usuallly read. (Lots of romance for many years, now mostly thrilllers and horror.) I'm so glad I gave this book a try. I can't really explain why I enjoyed it so, but I found it drew me in and I didn't want to stop listening.

This book was hard to put down. Start to finish. I enjoyed it very much.

Audio Rating: 4.50 (not part of the overall rating)

Quick Thoughts: This is a hard book for me to review. I listened to it in one day but there were points I thought about DNFing it. The characters really were hard to take and I think they were supposed to be. I couldn't sympathize with either of them (even at the end). That being said, the idea that a negative review could lead to this kind of thing absolutely made sense to me. In that essence, the characters were spot on. It would take two incredibly narcissistic people to take it as far as these two did. Did I like the book? Hard to say. Did I find it fascinating? At times. Would I recommend it? Maybe it would depend on the reader.


The narrators nailed this. I honestly think I stuck with the book because of how well they did. They really brought out every little thing about the characters. This was great audiobook casting.

Part of my Read It, Rate It, File It, DONE! Reviews

Really liked the narration and the plot. It came together so well in the end.

The most convoluted mess i hv ever listened to.

Sssstrugggled to finish. Messy, tawdry, too many personality flaws to be liked for me. n

I had just completed 3 pretty intense page turners so this light, minimum drama story was a welcome time out without having to take a time out.

I cried because there are so many life lessons in this book.
I listened in one sitting. There is loss, revenge, hope and ultimately redemption. Extremely well written with very very well fleshed out characters. This is one I will be thinking about for a while.

Definitely a different twist... thumbs up!

I liked this selection mainly because the plot was so different then most on the thriller credits. Well written although not a huge shock thriller, the story moves well and is enjoyable to listen to.

hi as always there will be no spoilers in my reviews
I went on an adventure with this book. up down and sideways. I laughed, I gasped, and really connected with characters ( thanks to the narrator I got a good feel for each person).
the back and forth isn't something I normally prefer however a lot of authors are working with that style and I am starting to like it.
no disappointments with this book