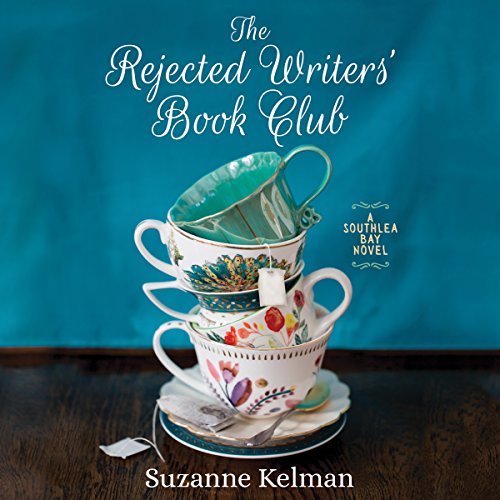 Librarian Janet Johnson is puzzled when she is invited - and practically dragged - to her first meeting of the Rejected Writers' Book Club. This quirky group of women would much rather celebrate one another's rejected manuscripts over cups of tea and slices of lemon cake than actually publish a book. But good friends are exactly what Janet needs after moving to the small town of Southlea Bay, Washington. Just as the ladies are about to raise a teacup to their five hundredth rejection letter, they receive bad news that could destroy one member's reputation - and disband the group forever. To save the club, Janet joins her fellow writers on a wild road trip to San Francisco in search of the local publisher who holds the key to a long-buried secret. As they race to the finish line, they'll face their fears - landslides, haunted houses, handsome strangers, ungrateful children - and have the time of their lives.

What listeners say about The Rejected Writers' Book Club

Frustrating. Didn't live up to its promise.

Unfortunately, Our Protagonist, Janet Johnson, a librarian in Southlea Bay, Oregon, where she and her husband have lived for the last five years, is just a bit hard for me to like. It has not yet occurred to her that, really, she's a bit of a snob. Even at the end, when she has discovered the true grit and assorted other positive qualities of the ladies of the Rejected Writers' Book Club, she seems more mildly annoyed than anything else that these have become her local circle for friends.

Let's note in passing that after five years, these are the first friends she's made on the island.

The Rejected Writers enjoy writing, and they have been unable to produce anything publishable. Having concluded that they never really will, they've made a virtue of necessity. They collect rejection letters, and put some money into a pot, for a celebration that they'll hold when they have five hundred total rejection letters. This might seem just silly, but they're enjoying their hobby. Sadly, when Janet is first pulled into their circle, what she sees is a collection of the ridiculous--a fat woman, a stick-like woman, a waif-like innocent, a church lady, and an aging hippy, among others. She can see no redeeming features even though Doris, the fat one, quickly demonstrates that she's a truly fantastic cook.

Janet, I'm sad to say, is the one that, when her daughter calls, clearly very upset, to tell her that no, she is not all right and that she is pregnant, says, "Congratulations!" The call is interrupted by daughter Stacy vomiting, and when conversation resumes, Janet tells her congratulations again, and gets off the phone fairly quickly.

I wanted to smack her but good.

Anyway, the plot, and yes, there is one: The ladies are collecting rejection letters, but one of them, Doris, has received an acceptance letter. By the rules of the club, this should mean she's out. Even worse, she borrowed part of that story from some old notebooks her aunt left in the attic of the house where Doris and her mother still live. Doris had assumed that what she borrowed was fictional, but it turns out to be at least partly based on an episode in her mother's life, and if it's real, it's quite scandalous. As much as Doris didn't want her manuscript accepted for publication anyway, it's even worse if its publication is going to embarrass and distress her mother. The ladies, including Doris, want Janet's help in actually reaching the editor who has accepted her book, who is not responding to attempts to contact him. He's based in San Francisco, where Janet's daughter lives, and Janet, who doesn't fly, has with some effort been prevailed upon to drive down there to stay with her daughter while Stacy's husband is away for two weeks on business.

There is much silly and entertaining activity on the road trip, and much excitement, and of course things get even stranger when they reach San Francisco.

I don't really know what to say. I think we are supposed to like Janet, and it is true that she's not truly an awful person; just a bit snobby, particular, and rigid.

I didn't stop listening, and I certainly could have. Even through Janet's eyes, the Rejected Writers can be seen to be an interesting group of ladies, with bigger hearts than is at first apparent.

Yet I really can't see myself reading another in the series. Glancing at other reviews, I can see that I'm clearly an unreasonable curmudgeon, but there it is. Not charmed at all, even though I wanted to be.

I bought this audiobook.

Sometimes you come across a book that just touches you. As a writer this was one of those books. Rich in warm likable characters that charmed you, made you laugh out loud. Found myself just simply enjoying the journey these ladies took me on. Warm and fresh and different.

While altogether this was a good, touching and funny story; it got a bit bogged down about 2/3rd of the way down. It picked back up at the end and had a solid finish. I would recommend it to others to read as it is an overall lovely story.

I loved the idea here, but some of the characters bordered on ridiculous (in a good quirky way). I might read the other books in the series.

I loved this book and had trouble putting it down. I needed to know what happened to the ladies of the rejected book club. The title is what caught my attention, that and the stacked tea cups is why I took a chance and bought it. This is a new author to me. I look forward to reading more of her work.

I loved this book. I could each character as the story went along. Very funnny, adventurous, all together lovely. There years of laughter and just tears of love. I definitely recommend reading/listening.😍

This story was enjoyable to listen to, but the concept was a bit different from what I normally enjoy. I liked the characters and the stories inside the tale, however, and spent a couple afternoons listening while working. Glad I listened to it, but didn't find the concept believable.

Stupid premise for a story.

Tho I got a few chuckles out of it, there were quite a few inconsistencies. Did she drive a Subaru or a Suburban? Were they alone on the mountain road or did all the cars behind them have to stop? Who submits a manuscript and hopes to get rejected and gets angry if one is accepted? The characters were well done. I actually have a friend that epitomizes Doris.

I think this had great potential...

I love the storyline and I think with better writing and narration for the audible it would have been better. Why is it when people write about southern they constantly use the stupid cliches to take up space. This could be a really well-written dramatic, with touches of comedy, with a southern flair but they ruined their potential with sloppy, lazy, cliches and stereotypes. Bummed. the best part of the book was the last chapter 23 and 24. If she hadn't done so much complaining through all the other 22 chapters it might not have been so bad.

The blurb tells you what it's about. I just figured that I needed something light to listen to after all the psychological thrillers I usually listen to. This was certainly entertaining. I definitely will not remember this book after I've read a few more of any genre. It was amusing but not one of my top books that's for sure.

I have to say this is not an inspiring story and it would have been listenable if it wasn't for the narrator's american drawl lasting for 8 hrs. I admit I struggled to get to the end favouring something more thrilling. In fact, I have 2 hours left to go and I don't think I'm going to make it... send help!!

Do you think The Rejected Writers' Book Club needs a follow-up book? Why or why not?