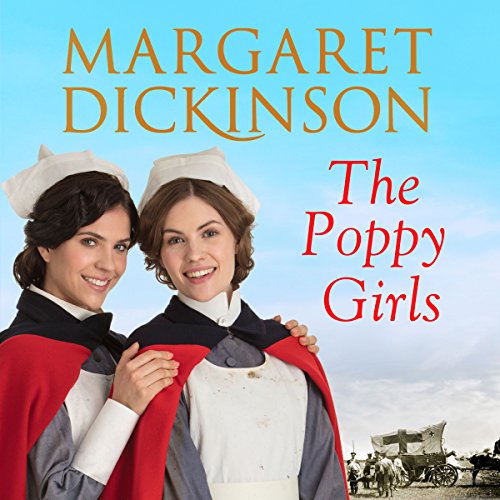 The Poppy Girls is the first title in The Maitland Trilogy, by best-selling author Margaret Dickinson.

Even amidst the horror of the trenches, friendship will survive.

Thwarted in her desire to become a doctor like her brother, Robert, Pips Maitland rebels against her mother's wishes that she settle down and raise children. However, when Robert brings home a friend from medical school, Giles Kendall, it seems perhaps Pips might fall in love with an acceptable suitor after all. But the year is 1914, and the future is uncertain. Hearing that her father's friend, Dr John Hazelwood, is forming a flying ambulance corps to take to the front lines, Pips is determined to become one of its nurses and asks Alice Dawson, her maid, to go with her. Robert and Giles offer their services as doctors, and Alice's brother William joins them as a stretcher bearer.

Nothing could have prepared them for the horrific sights they encounter. Moving their unit close to the fighting to offer first aid as quickly as possible puts them all in constant danger. But even amidst the barrage of shelling and gunfire and the unending stream of injured being brought to their post, the love between Pips and Giles survives and blossoms just like the poppies of Flanders fields.

What listeners say about The Poppy Girls

Didn’t take to the narrator, sorry.

I persevered for a while but I couldn’t take to the narrators voice & gave up.
I normally love this authors books too.

Everything about this book was awful. Even the narration was not good and was not worth listening to

What a fantastic book

I loved this book. Although quite heart rendering at times. I also learnt quite a lot about the first world war

A story with huge potential

The story was thoroughly spoilt for me by a narrator that had a very irritating attempt at the characters voices, it was so false. The sing song tone throughout almost made me give up.