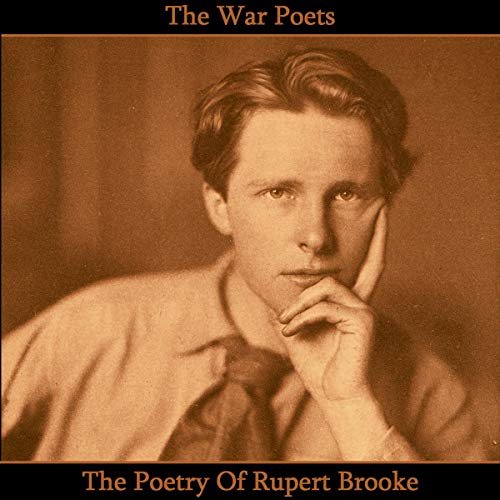 The Poetry of Rupert Brooke

Brooke attended preparatory school nearby at Hillbrow and then went on to Rugby School. In 1905, he became friends with St. John Lucas, who thereafter became something of a mentor to him. While travelling in Europe he worked on a thesis, 'John Webster and the Elizabethan Drama', which won him a scholarship to King's College, Cambridge. Once there Brooke became a member of the Apostles, was elected as President of the Fabian Society and helped found the Marlowe Society drama club. The friendships he made during his education were an essential part of his future years, and many fell under the magic that he seemed to weave.

In 1907, his eldest brother, Dick, died of pneumonia at age 26. Brooke at once wanted to stop studying to help his devastated parents cope with this tragedy, but they insisted he return to school. Amongst the Bloomsbury group of writers and artists he blossomed. Many admired his talents, but others were rather keener on his good looks. Brooke was also part of the Georgian poets and one of the most important of the Dymock poets, from the Gloucestershire village of Dymock, where he spent time before the war.

In 1912 Brooke suffered a severe emotional crisis caused by his bisexuality and jealousy. This caused his long-term relationship with Katherine ‘Ka’ Laird Cox to break down, and the result of that was nervous collapse and trips to Germany for rehabilitation. Whilst in Berlin and feeling dreadfully homesick he penned his classic 'The Old Vicarage, Grantchester'. As part of his recuperation, Brooke toured the United States and Canada to write travel diaries for the Westminster Gazette. Travelling back to England, he wrote much fine verse on the journey sailing across the Pacific and during his stay of some months in the South Seas.

In August 1914 war broke out in Europe, and Brooke enlisted. Brooke was commissioned into the Royal Naval Volunteer Reserve as a temporary sublieutenant shortly after his 27th birthday and took part in the Royal Naval Division's Antwerp expedition in October 1914. He sailed with the British Mediterranean Expeditionary Force on 28th February 1915 but en route developed sepsis from an infected mosquito bite. On March 11th The Times Literary Supplement published two sonnets: IV: 'The Dead' and V: 'The Soldier'. They captured the nation’s attention with their eloquence and tribute.

Rupert Chawner Brooke died in the early hours of 23rd April 1915, on a French hospital ship moored in a bay off the Greek island of Skyros in the Aegean Sea. Brooke was buried at 11 p.m. in an olive grove on Skyros. His poetry book containing his sonnets, 1914 & Other Poems, was first published in May 1915 and proved immensely popular.

What listeners say about The Poetry of Rupert Brooke

On a sunless afternoon I chanced to look,
upon my iPad, for a book;
Something to satiate the listless hours
and smite boredom’s wretched powers;
Imagine my unrestrained sense of glee,
to discover all it actually took;
were the cogent poems revealed to me,
by the illustrious author, Rupert Brooke.