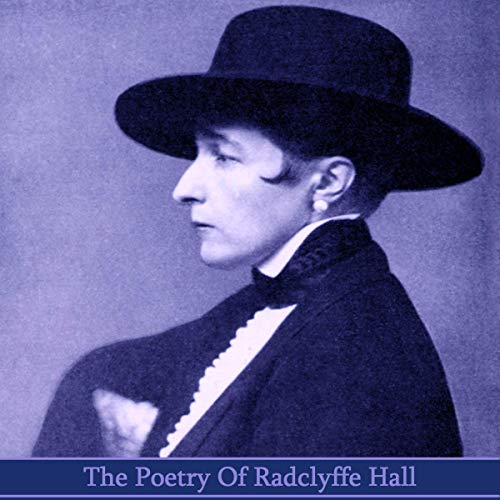 The Poetry of Radclyffe Hall

Marguerite Radclyffe-Hall was born on August 12th, 1880 to wealthy parents who separated while she was still an infant. Her parents thereafter paid little attention to her. Hall was educated privately, and then at King’s College London. Later she travelled to Europe, settling in Dresden, Germany. With the death of her paternal grandfather she inherited a large estate and was then able to live as she pleased.

In Germany, Hall met Mabel Batten and fell in love despite the 23 year age difference. Batten gave Hall the nickname ‘John’ by which she was henceforward known in every circumstance throughout her life except in her work as an author.

In 1915, Hall met and, in 1917, moved in with sculptor Una Troubridge, with whom she would remain for the rest of her life.

Hall wrote poetry all throughout her 20s and 30s. She had published Dedicated to Arthur Sullivan as early as 1894, and five further volumes of collected works were released before she stopped writing poetry and published her first novel, The Forge, in 1924.

That same year also saw publication of The Unlit Lamp, the first work for which Hall was known as simply Radclyffe Hall.

The Well of Loneliness, the most important novel of Hall’s career, was published in 1928 to immediate sensation and controversy. It is Hall’s most direct artistic expression of her own personal sexual orientation.

After the controversy of The Well of Loneliness, Hall would publish only two more novels and a collection of short stories.

After years spent travelling in Italy and France and a series of long lasting affairs with other women (of which Troubridge was apparently aware), Hall retired with Troubridge to Rye, in East Sussex. Here, suffering from tuberculosis, she also underwent eye surgery and thereafter had difficulty reading and writing.

On October 7, 1943, Radclyffe Hall died from colon cancer at the age of 63. She is buried in Highgate Cemetery in London.

This volume comes to you from Portable Poetry, a specialised imprint from Deadtree Publishing. Our range is large and growing and covers single poets, themes, and many compilations.

What listeners say about The Poetry of Radclyffe Hall