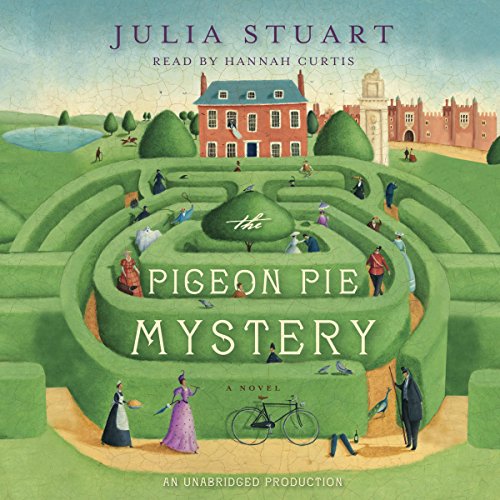 Julia Stuart returns in her follow-up to the best-selling The Tower, the Zoo, and the Tortoise with this clever murder mystery set in Victorian England, brimming with her signature charm and fabulous characters.

When Indian Princess Alexandrina is left penniless by the sudden death of her father, the Maharaja of Brindor, Queen Victoria grants her a grace-and-favor home in Hampton Court Palace. Though rumored to be haunted, Alexandrina and her lady's maid, Pooki, have no choice but to take the Queen up on her offer.

Aside from the ghost sightings, Hampton Court doesn't seem so bad. The princess is soon befriended by three eccentric widows who invite her to a picnic with all the palace's inhabitants, for which Pooki bakes a pigeon pie. But when General-Major Bagshot dies after eating said pie, and the coroner finds traces of arsenic in his body, Pooki becomes the number-one suspect in a murder investigation.

Princess Alexandrina isn't about to let her faithful servant hang. She begins an investigation of her own, and discovers that Hampton Court isn't such a safe place to live after all.

With her trademark wit and charm, Julia Stuart introduces us to an outstanding cast of lovable oddballs, from the palace maze-keeper to the unconventional Lady Beatrice (who likes to dress up as a toucan - don't ask), as she guides us through the many delightful twists and turns in this fun and quirky murder mystery. Everyone is hiding a secret of the heart, and even Alexandrina may not realize when she's caught in a maze of love.

What listeners say about The Pigeon Pie Mystery

The Pigeon Pie Mystery is wonderful! Julia Stuart has written a funny, "cozy" mystery. It is an extremely well researched story full of wonderfully complex characters who interact with each other in unexpected, yet completely believable, ways. The author makes you really care about her characters. The setting is a real place, and by the end of the book you feel like you have been there, too.

Hannah Curtis is a totally perfect reader for this. You never have to guess which character is speaking, as her characterization is remarkably good, without ever being overdone. And her accents are pitch-perfect.

I enjoyed it hugely, and did not guess who "done it" before the end. It was definitely worth the credit, and I will listen to it again.

The writer has a very subtle and dry wit that comes out very well in this story. The situational absurdities and comical satiric take on the English upper class mores are delightful.

The plot was good, even without the normal suspense seemingly required in most mysteries these days. One gets the feel of the renowned English emotional reserve very well. I did not guess who-dun-it, even though the clues were there.

The narrator was great. Just the right pace and displayed the author's witticisms with excellent tongue in cheek style. Her accents were great, except for the American one. But then, I've yet to hear an English narrator ever get the American accent down properly!

Overall, this book was delightful and look forward to more from this author/narrator duo.

Any murder mystery that forgoes the overly graphic descriptions of violence and sex deserves at least a 3 on my personal rating scale. This book did that and, in addition, was well read and very funny in places. I was also motivated to learn more about “grace and favor” and Hampton Court Palace so I was not sorry I bought it. But….if it were part of a series, I would probably not buy the second book and will probably not listen to this one again. Those kinds of books are rated 4 on my scale. It is just a pleasant, light read that you will forget the minute you close the book (or stop the player).

Would you try another book from Julia Stuart and/or Hannah Curtis?

Probably won't try another book by either. I dislike writing negative reviews, but I found the story boring and the narration unpleasant to my ear. I kept listening, waiting for the story to get better, but unfortunately it never did for me. I guess I'm a person who likes a more active plot that draws one into the story, and this never did. I love British stories, TV, etc but this didn't meet my expectations.

The English accent did not sound authentic to me.

Victorian 'is it a murder' mystery (scene is thoroughly set as the death does not happen until about half way through) set in Hampton Court. Humour is delightful (one part made me chuckle out loud, and it was not the ludicrously amusing scene in the church, but at the garden party). This is a novel set in a very strongly held British Class Structure, where appearances are held up - whilst struggling with genteel poverty. The characters are, on the whole, engaging.

I would recommend reading this instead. The narrator's lack of inflection caused me to rewind several times because the sentence didn't make sense.

She was just wooden. I couldn't determine which character was speaking often times.

What character would you cut from The Pigeon Pie Mystery?

The princess. She was just annoying. I didn't care if it had a happy ending or not. I got 3/4 of the way through and quit listening. I've never done that in 10 years of being an Audible member.

English book has some bite to it

I have never read anything by Julia Stuart but took a chance and was glad I did.
Book started out kinda slow and I had to get used to the English accent and some new words but all in all is was a entertaining book.
The last part of the book was the best and I was glad to have read it all.
The murder mystery as solved with a few little twists and I never had a guess on who "done it".
I will check other books from this author.

Would you try another book from Julia Stuart and/or Hannah Curtis?

Would you be willing to try another book from Julia Stuart? Why or why not?

Could you see The Pigeon Pie Mystery being made into a movie or a TV series? Who should the stars be?

Sure. But more than a 3-part series. Too light. No opinion on actors.

If you could sum up The Pigeon Pie Mystery in three words, what would they be?

Has The Pigeon Pie Mystery turned you off from other books in this genre?

I'm not sure what genre this would be, but it has definitely turned me off from any books by this author!

No! I kept listening in the vain hope that it would get better or more interesting. The characters are unbelievable and definitely not sympathetic.

There are definitely moments of humor throughout the book. This is its only redeeming quality in my opinion. I'm still not sure if it was supposed to be a comedy, a historical novel, or a mystery?

What did you love best about The Pigeon Pie Mystery?

Clever plot, excellent characters, dry wit. The reader is also excellent, has the accents down pat.

Have you listened to any of Hannah Curtis’s other performances before? How does this one compare?

Never listened to one before