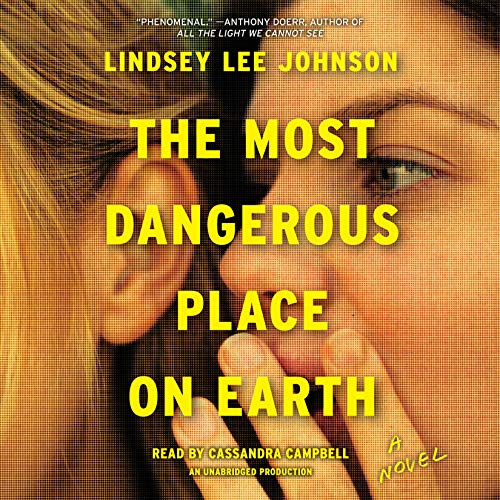 The Most Dangerous Place on Earth

An unforgettable cast of characters is unleashed into a realm known for its cruelty - the American high school - in this captivating debut novel for listeners of Celeste Ng's Everything I Never Told You and Curtis Sittenfeld's Prep.

The wealthy enclaves north of San Francisco are not the paradise they appear to be, and nobody knows this better than the students of a local high school. Despite being raised with all the opportunities money can buy, these vulnerable kids are navigating a treacherous adolescence in which every action, every rumor, every feeling, is potentially postable, shareable, viral.

Lindsey Lee Johnson's kaleidoscopic narrative exposes at every turn the real human beings beneath the high school stereotypes. Abigail Cress is ticking off the boxes toward the Ivy League when she makes the first impulsive decision of her life: entering into an inappropriate relationship with a teacher. Dave Chu, who knows himself at heart to be a typical B student, takes desperate measures to live up to his parents' crushing expectations. Emma Fleed, a gifted dancer, balances rigorous rehearsals with wild weekends. Damon Flintov returns from a stint at rehab looking to prove that he's not an irredeemable screw-up. And Calista Broderick, once part of the popular crowd, chooses, for reasons of her own, to become a hippie outcast.

Into this complicated web, an idealistic young English teacher arrives from a poorer, scruffier part of California. Molly Nicoll strives to connect with her students - without understanding the middle school tragedy that played out online and has continued to reverberate in different ways for all of them.

Written with the rare talent capable of turning teenage drama into urgent, adult fiction, The Most Dangerous Place on Earth makes vivid a modern adolescence lived in the gleam of the virtual but rich with sorrow, passion, and humanity.

What listeners say about The Most Dangerous Place on Earth

One of the worst books I ever read. None of the characters were likable and although I’m sure many middle school/high school kids like these characters but all bad...even the teachers. Misogynistic remarks as well as other ridiculous comments. I don’t know why I felt compelled to finish it but nothing I liked about it.

If you could sum up The Most Dangerous Place on Earth in three words, what would they be?

What other book might you compare The Most Dangerous Place on Earth to and why?

There are moments this reminded me of Rules of Attraction by Brett Easton Ellis, but these characters were far more redeemable. Their series of decisions were smaller, less regrettable, less intentional. More alive.

The first chapter of this book had me sobbing. Driving home from work, heading into a weekend and sobbing uncontrollably. This never happens, I assure you. I felt the hopelessness and abandonment of these characters. I knew what was coming and was powerless to stop it. I read each chapter to see their own views, their personal journeys and if they may be able to become entangled from the web of a shared experience. I read with so much hope for them all that this may be fixable. They all learn. They all grow and evolve. They all pay. Some of this is self inflicted and some of this is the product of the negligence or occasional yet fierce smothering around them. This is very well orchestrated, well coordinated and still an emotional tale. It's an interesting story where I somehow miss a character I never knew and can never comfort or guide. From that perspective alone, this book is extraordinary.

I think every city has the same issues in high school. It is not just the rich over indulged children in Marin county. Where did the author get the story by the way..
I did enjoy reading a book written about the Bay Area. I am a resident of the area( not Marin ) the descriptions of redwood groves and weather were spot on.

What a bunch of spoiled mean creeps! Obnoxious kids hurting each other— that’s what this book is all about. A good portrait of bullying and its consequences. #ComingOfAge #IssueFiction #Depressing #tagsgiving #sweepstakes.

Thankful to have Just Enough without Excess

Just like prep schools where parents trust too much. Students do too little. No one required to give to others - only allowed to take from others.

A book for every teenager, eye opener for parents

A wonderful book. I wish this was a required book for every middle school child.

I couldn't understand why this book got negative reviews. I really enjoyed the multiple perspectives. It's a new favorite of mine.

Over Hyped..an attempt to recreate a PG "Kids"

YA readers..usually i enjoy narrators from different POVS, but this was not a cohesive story and had a very dull ending.

Has The Most Dangerous Place on Earth turned you off from other books in this genre?

monotone...no real variances between characters; be they male or female.

What character would you cut from The Most Dangerous Place on Earth?