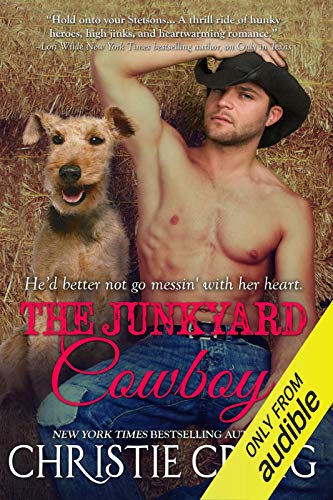 Jennifer Peterson has been unlucky in love, but now, thanks to an Internet search, she's found a surefire formula for identifying the perfect man. Statistics seem to show that if she narrows her search to men of certain careers and physical attributes, she'll have a better shot at success. So now she's on the hunt for not-so-well-endowed, short and hairy podiatrists or funeral directors who've been dubbed less likely to cheat than their tall, good-looking counterparts. Yup, she's narrowing her playing field to the "safe" guys.

But nothing feels safe when a hit man runs Jennifer off the road and chases her into an old junkyard. The sexy cowboy who runs the place may be the best man to keep her alive, but he's also the type to most likely put her heart in jeopardy. Should she trust her head and keep playing it safe or throw all logic out the window for the one guy who may be worth the risk?

What listeners say about The Junkyard Cowboy

This is definitely one of the top 5 books I have listened too!! This story had me cracking up so hard I had tears streaming down my face. My coworkers were worried about me.

So many different levels

This is the third in the series and I loved all 3. First time listen to Christie Craig. I can’t wait to hear more!

Lightest, sweetest, funnest of the three

Not sure what’s up with the cover advertising a junkyard bad boy... the other books in the series are more accurately depicted with cute, comic pinkness. All three books are firmly in “light, sweet romance and nice rather than naughty nooky” territory. This is the third book in the series, each featuring a lawman, a crime caper, and romance with two emotionally damaged individuals. I liked this one best for the balance of crime, romance, and humor, all packed into a just-the-right-length 6 hour novella. The cast of characters from books 1 & 2, plus the addition of 80yr old Pete and junkyard dog Devil mixed things up.

On the downside, the narrator’s rendition of Jennifer is very Jennifer Tilly nasal, like she’s a teenager. That, combined with the rolling gag about Jennifer seeking out a short, balding mortician with a tiny pecker for her HEA (because statistically they’re loyal and unlikely to divorce), made Jennifer seem like a superficial, irrational ditz. Further, the fact that she’s had not one, not two, but three former husbands or fiancées, made it impossible to avoid the conclusion that Jennifer only thinks she’s worth something if she’s married. In this day and age, it’s sad to see female leads defined only by their relationships.

Also, having heard all three books in the series, it’s clear the author is a one trick pony- or is at least fixated on one romance picture. All three books feature:
A tragically dead parent for one of the leads
A ne’er do well parent for one of the leads (alcoholism, cheating, abuse, take your pick)
Cheating exes or bad divorces for both leads, causing each to have given up on love and providing the conflict plot device to overcome on the way to the HEA.
A cat with a cute name for the leading lady (Elvis, Boots, Pumpkin)
A sweet, slow build to sex,, which is limited to either him or her on top, and nothing else very creative.

It’s not a bad collection of romance tropes, just not one I needed to listen to in all three books. Since they can all be borrowed for free in Audible Escapes, listening to all three books in this series wouldn’t be the worst thing In the world. But, in the off chance you haven’t done 1 & 2, I suggest starting and ending with this one. Or, get book 2 also, since it’s similarly short. Book 1 is nearly 12 hrs long, and that double length compared to 2 & 3 is spent on angst, divorce, and death. Book 1 was too much of a downer.

If you want more fun cop romance, try Jed Had To Die (if you favor the humor side) or Hot Cop (if the nooky wasn’t nearly hot or explicit enough for you here). If you just want sweet, a little fun, and divorce-obsessed where all exes are bad, any of these three work, but this is the funnest of the three.

This was a delightful entry into the TALL HOT AND TEXAN Series, which I have loved. I enjoyed learning the junkyard cowboy was more than meets the eye on the current cover. He had a depth and history that made him an admirable hero for the heroine, who was also more than she first seemed.

It felt great to see characters from previous novels make cameo appearances here and the overall feeling reading this was that of warmth, happiness, laughter and tenderness. Christi Craig, I appreciate your style of writing!

I recommend this series. Each book stands alone, but I’ve wrung more pleasure out of them by reading them in order, even though you don’t have to.

I really had fun reading this humorous romance. I found myself laughing out loud at some of the characters ' antics. Heart felt connections between the friends and their spouses made me feel good.

Getting kinda of tired of Amazon sticking the button to purchase Audio so close to the purchase book button. This is the 2nd or 3rd time I've 'PURCHASED' audio! I DON'T LISTEN to books. Really tired of it. And can't find a way to RETURN them!!!!