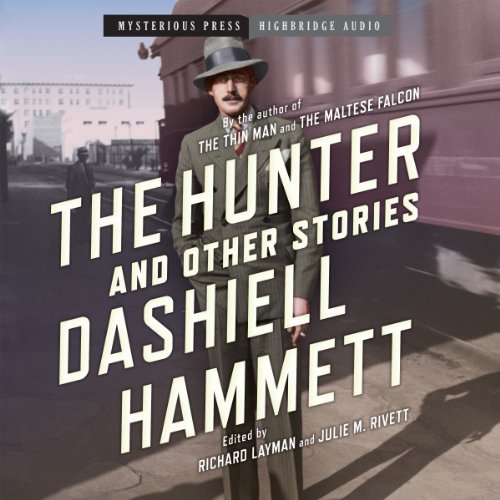 The Hunter and Other Stories

Dashiell Hammett is best known as both pioneer and master of American hard-boiled detective fiction, but these dozen and a half stories both affirm that reputation and present him in a different light. Along with the full-length screen treatments On the Make (which became the movie Mr. Dynamite, 1935) and The Kiss-Off (the basis for City Streets, starring Sylvia Sydney and Gary Cooper, 1931), this collection includes never before and rarely published stories that explore failed romance, courage in the face of uncertainty, hypocrisy, and crass opportunism.

Collected and edited by Hammett's granddaughter, Julie Rivett, and noted Hammett scholar and biographer Richard Layman, The Hunter and Other Stories is a trove of priceless literary gems from an American master storyteller.

What listeners say about The Hunter and Other Stories

A must for Hammett fans, a curio for everyone else

About 33% of it was spent great, and about 33% more was not misspent. The other third was wasted.

Would you be willing to try another book from Dashiell Hammett? Why or why not?

A collection of unpublished stuff, it contains about 20% of absolute genius, about 40% of absolute trash, about 10% of curios ranging from "interesting" to "very talented" and the rest is filler.

The most irritating stuff is the "commentary" running before each part of the book. The preface is good -- gives Hammett's biography -- but the rest is a time-waster.

All in all, a good listen-once book, and some of the stories are worth listening to again. About 33% of them.

Not Just A Crime Writer

Oh, yes. I've read short story collections before, and this one has the best hit-to-dud ratio of them all. Personally, I think Hammett was one of the best writers of the 20th century. He could write immersive tales with moments that, as Chandler said, seem like they've never been written before.

He travels all over in this collection: there's a caper story, some slice-of-life fiction, even a fantasy tale. Given his prose, and his eye for detail, I'm sure almost anyone can find something here to like.

Some of the longer stories did, and in different ways. Some stories were less than ten minutes long, and couldn't build much suspense.

Nothing stood out; the narration was good all around.

Who was the most memorable character of The Hunter and Other Stories and why?

Tough one. I'd have to go with the eccentric jewel thief in "The Diamond Wager"; he was fun.

The film treatments were pretty meh. They sound closer to Wikipedia articles than to actual stories. "On The Make" was cool, though.

Would you listen to The Hunter and Other Stories again? Why?

No I wouldn't, this is actually the first book I'm not able to even finish listening. The narrator (Ray Chase) in the Hunter story is just abysmal. I'm sorry to be this harsh, but his emotion, pacing and tone is just so far off from a professional output, that I really wonder how anyone at Audible has thought, that this performance should be accepted for paying customers. I will be returning this one.

Hard to say, didn't manage to finish it.

Who might you have cast as narrator instead of the narrators?