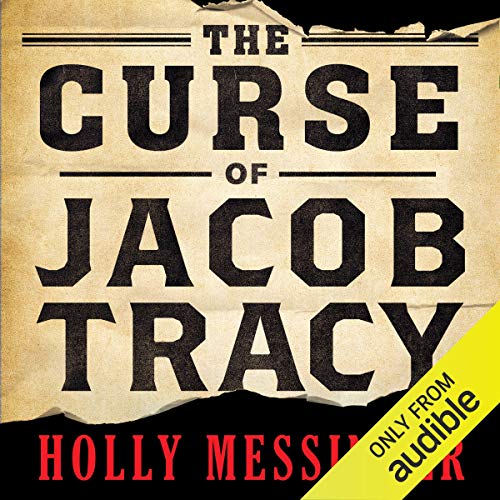 The Curse of Jacob Tracy

St. Louis in 1880 is full of ghosts - mangled soldiers, tortured slaves, the innocent victims of war - and Jacob Tracy can see them all. Ever since Antietam, when he lay delirious among the dead and dying, Trace has been haunted by the country's restless spirits. The curse cost him his family, his calling to the church, and damn near his sanity.

He stays out of ghost-populated cities as much as possible these days, guiding wagon trains west with his pragmatic and skeptical partner, Boz. Then, just before the spring rush, Trace gets a letter from the wealthy and reclusive Sabine Fairweather. Sickly, sharp tongued, and far too clever for her own good, Miss Fairweather needs a worthy man to retrieve a dead friend's legacy from a nearby town - or so she says. When the errand proves far more sinister than advertised, Miss Fairweather admits to knowing about Trace's curse and suggests she might be able to help him - in exchange for a few more odd jobs.

Trace has no interest in being her pet psychic, but he's been searching 18 years for a way to curb his unruly curse, and Miss Fairweather's knowledge of the spirit world is too tempting to ignore. As she steers him into one macabre situation after another, his powers flourish, and Trace begins to realize some good might be done with this curse of his. But Miss Fairweather is harboring some dark secrets of her own, and her meddling has brought Trace to the attention of something much older and more dangerous than any ghost.

Rich in historical detail and emotional depth, The Curse of Jacob Tracy is a fast-paced and inventive debut, an intriguing introduction to a bold new hero.

What listeners say about The Curse of Jacob Tracy

I enjoyed listening to this book and it did make the time at work go by very quickly; however, that being said there is nothing new here. This is supernatural monster hunting set in the old west. All of the usual suspects are there as well as the usual solutions. What makes this a good read or 'listen' is the great friendship and camaraderie between the two main characters. It's obvious this is the first of a series and if the second is as fun a listen as the first I look forward to it.

Would you try another book from Holly Messinger and/or L. J. Ganser?

Sure. L.J. Ganser's narration was well done and Holly Messinger has a good grasp on character development.

While two of it's main characters, Jacob Tracy and his friend Boz are likeable and well developed wild west characters, their adventures are a bit predictable and don't really mesh well as an overarching story. While there is a main villain and problem lurking in the background, the overall story is basically broken up between individual little missions Tracy and Boz find themselves on and the book comes across as a bunch of short stories tied together. The book also just ends abruptly without a real satisfying conclusion or interesting cliffhanger.

There was a funny scene were Jacob Tracey is trying to help a ghost to move on by getting her still living family to stop seeing a spiritual medium and he ends up having to pretend to be a part of the medium's act in order to get the family to believe him because they didn't seem to want to listen to reason.

Do you think The Curse of Jacob Tracy needs a follow-up book? Why or why not?

I don't really think "The Curse of Jacob Tracy" really needs a follow up although it was clearly written with the idea of sequels in mind. The whole book was a series of basic old wild west movie scenarios (bar brawls, shoot outs, horse riding, raids on trains, etc.) only each scenario is triggered by supernatural beings instead of bandits, angry native Americans, and corrupt town officials.

Fun book. Nothing deep or groundbreaking here, unfortunately, but an enjoyable listen for anyone who likes both old westerns and old monster movies.

What made the experience of listening to The Curse of Jacob Tracy the most enjoyable?

Jacob Tracy is a believable character that is confronted with his internal demons. He is rough and tough, like a western sheriff, but tender with women and children. His story is compelling and well worth your attention. It is written in terms of his time, with no politically correct slanting. That takes courage and I applaud the writer.

What was one of the most memorable moments of The Curse of Jacob Tracy?

What about L. J. Ganser’s performance did you like?

I wish I could do that.

I look forward to his further adventures

Loved this book! Good solid writing style. Narrator was excellent in his delivery and did a great job with different accents. The story line was exciting and unique. It kept my interest to the very end and made me wishing it hadn't ended. Can't wait for the 2nd book.

A novel that masterfully brings together the genres of the western, horror and the supernatural with some wonderfully drawn characters. If you liked the 1970s Darren McGavin Night Stalker TV show (one of my favourites) and Clint Eastwood movies then you'll love this start to an extremely promising new series - please bring on book two!

This is a great example of genre fiction ... it's a Western, with a hefty dose of the supernatural. It's got all the tropes you would expect from a Western story, almost like a season of a Western TV series. There's the typical laconic cowboy hero, the plucky no-nonsense sidekick, the mysterious lady. The story is episodic, yet each episode is part of a larger plot, which does develop throughout the novel to a real climax with a conclusion that is (I think) satisfying while still leaving itself wide open to sequels. It's got the sort of dialog, settings, and supporting characters I would expect from the genre; it touches on the racism inherent in the era but without too much of a focus on that (surely soft-pedalling there); there's very little profanity and no graphic sex (no sex at all, in fact, though there are soiled doves and a love interest). I liked all three of our main characters, each of whom has enough mystery to be interesting. The main bad guy is a really bad guy; the supernatural elements are well thought out, seem consistent, and are very creepy. The narrator does a good job of capturing that wild west feel, including the various accents.

My one problem with the book ... and it's my preference, nothing to do with the quality of the book or production ... is the massive body count that piles up, and the amount of blood and gore along the way. Men, women, children, and LOTS of animals (horses and cows, including a lot more detail than I needed to know about what it was like to work in an Old West slaughterhouse) meet grisly terrified deaths. That was really way too much for me. I ended up hitting the skip button more and more as I went, and will not want to listen to this book again because of it. If I'd known about all the gruesome suffering, terror, and death of animals and people, I probably wouldn't have gone for this book. I don't consider this a failing of the book (so haven't deducted any stars from my rating), but want to warn other readers what they're in for here.

What made the experience of listening to The Curse of Jacob Tracy the most enjoyable?

It's a fun book, and quite well written, but it does read a bit like a TV series, with all the good and bad thing that implies.

On the bad side, it pretty much employs every cliche one would expect to find in a Western Paranormal Buddy series :) - tortured but interesting (white) hero, facing his gift and numerous paranormal monsters while ably, sarcastically and faithfully aided by his laconic, practical (black) sidekick. While the race question is superficially addressed, it's pretty much what you would expect from Rush Hour or Lethal Weapon.

On the good side, it is entertaining and well written with a very good narrator, my only quibble being his voice for the main female character being a bit weak, but he is really excellent aside from that, just needs to work on that English accent!

So, cliche 'hero's journey' stuff but with fun twists and turns and ably read!

The BestDamn book I ever read

Wonderful combination of Wild West,the supernatural, and terrific reading. She has 2
More books that are connected to this one and I hope that audible will read them.

Could have been much better

I thought this could have some real potential so I picked it up in sale, but I just never really got into it. The characters are interesting and the writing is good, but it seemed like there was never really an overall plot or enemy to link all of the goings on. Instead it felt like a series of short stories with Tracey as the main character using his powers to solve mysteries and save folks from the paranormal. The ending pulled it all together but by then the dye was already cast. It’s certainly wasn’t a bad book, but not as good as I felt it could have been.

Mr. Ganser's narration was great! He really brought the book to life.