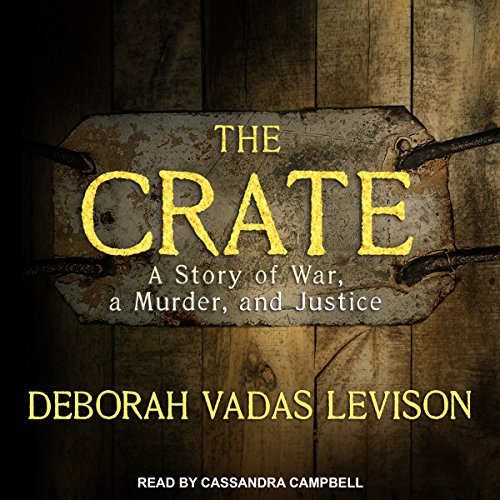 After surviving the horrors of the Holocaust - in ghettos, on death marches, and in concentration camps - a young couple seeks refuge in Canada. They settle into a new life, certain that the terrors of their past are behind them. They build themselves a cozy little cottage on a lake in Muskoka, a cottage that becomes emblematic of their victory over the Nazis.

The charming retreat is a safe haven, a refuge from haunted memories. That is, until a single act of unspeakable violence defiles their sanctuary. Poking around the dark crawl space beneath their cottage, they discover a wooden crate, nailed tightly shut and almost hidden from view. Nothing could have prepared them for the horror of the crate's contents - or how the peace and tranquility of their lives would be shattered.

Now, their daughter, Debbie Levison, an award-winning journalist, tells the extraordinary account of her parents' ordeals, both in one of the darkest times in world history and their present-day lives. Written in searing, lyrical prose, The Crate: A Story of War, a Murder, and Justice examines man's seemingly limitless capacity for evil...but also, his capacity for good.

What listeners say about The Crate

The author chose to weave multiple stories and lives together in this book starting with the description of the telephone call received on vacation complete with descriptions of the family distractions. It is all of the distractions that compels me to offer the warning to listen carefully, because even in those descriptions and wanderings there are tidbits and clues necessary for the stories of many of the people associated with the cabin where evidence of a murder was found in 2010. The author's parents built the summer cabin as a retreat a few years after arriving in Canada from their escape from Hungary several years after surviving the holocaust. Expect a number of twists in the stories and that several countries and continents are covered. Finding what happened to the author's paternal grandfather is an unusual story in itself. Be patient because the author does finish the story of the cabin with a twist. The murder investigation and trial in Canada is interesting but the author does not focus as much on the details as some people might like, instead the focus is more on the lives of the murder victim and her close family and the person charged with the murder. I listened to the book a second time after a few days trying to decide what I thought about the book. Perhaps the author identified my concerns in one of her personal queries that included the word "obsessive." Be patient and listen carefully.

Memoirs of an unrepentant narcissist

From the first sentence, the purple prose caused me concern. The author digs for so many flowery metaphors and similes that a creative writing teacher would blush. You might expect it would pay off at some point, but it doesn't. The baroque language abates like the sun dropping over the horizon, but the worst is yet to come. The biggest sin of this book is that it is just flat out dull and self-aggrandising. There is no "woven" text. It's a few stories cobbled together to illuminate to the listener the extreme hardship the author has suffered. She has the audacity to conflate her parents' fleeing Nazis, and later communists in Hungary, to her travails in moving from Canada to the states with her family. Really? And it doesn't end there. Learning of a murder in the location of her family's cottage, the author is crippled by the pressure to protect these horrors from her children, and even more so, protecting her aged parents from (in her mind) reliving the trauma they experienced in Europe. This woman is so hard done by, how does she maintain! She's drafting off the horrors of the Holocaust and Soviet occupation of Hungary, to rationalise her own neuroses. The story of the victim of the crate in the title is treated similarly. Her life and demise are only interesting to the author in how it relates to the author herself. This is one of the first books I've seriously thought about returning.

Would add it to my collection!

Loved it eventhough sometimes the author was super descriptive. You can even find newspapers articles of it on line

And I used a credit on this?

Yes it a story, incoherent but still sort of a story. But a really really bad one. She is touching murder, but it is just a touch, this is no crime story. Story of war? Yeah a chapter or two. But no depth. The justice? Have noe idea. Must be Leveison's own feeling that it is justice to write a book, even if you don't have much to write about. I was so disapointed and through the hole book I awaited for something to happens, but it never did. To be honest this is so bad that I am thinking of handing the book back to Audible

The Crate is a phenomenal memoir. By juxtaposing the stories of violence with the stories if her family, Levison reveals both the ugliness and the beauty of humanity. This is an incredibly powerful story.

Well written and welll narrated. I only wish we could have found out who had helped move the body. and who was Samantha's secret lover and why he had not come forward or at least made an anonymous tip on whatever he knew. She handled a complicated plot well. And the narrator broughgt it to life.

Deborah Vadas Levison is a wonderful story teller. She keeps you engrossed during the whole story. She gave Samantha a much needed voice, and you learn so much about her and the struggles she had to endure. She weaves together a story of life and death situations, and tells of horrendous atrocities that we must never forget. She adds her own personal thoughts to the story, and keeps you captivated from beginning to end.

A rendering of a sad and terrifying story. The story a difficult one but beautifully written between the present and past, blending together leaving the reader with a sense of awe at the perseverance of humans. Read it you will not be disappointed.

I pre-ordered this book last week. It became available this past Tuesday and I just finished it. Once I started I couldn’t stop listening. I highly recommend it for anyone. Besides the events evolving in North America within the past decade, this book contains the perfect amount of historical events that happened in Eastern Europe during and right after WWII, that will ignite the curiosity of any historical event lover’s to dig deeper and find out more. X.D.