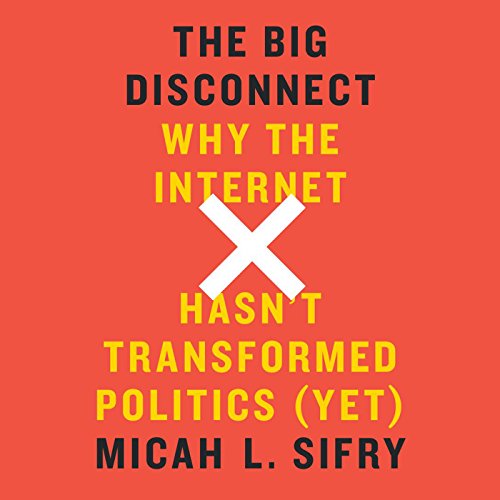 Now that communication can be as quick as thought, why hasn’t our ability to organize politically - to establish gains and beyond that, to maintain them - kept pace? The web has given us both capacity and speed: but progressive change seems to be something perpetually in the air, rarely manifesting, even more rarely staying with us.

Micah L. Sifry, a longtime analyst of democracy and its role on the net, examines what he calls The Big Disconnect. In his usual pithy, to-the-point style, he explores why data-driven politics and our digital overlords have failed or misled us, and how they can be made to serve us instead, in a real balance between citizens and state, independent of corporations.

The web and social media have enabled an explosive increase in participation in the public arena - but not much else has changed. For the next step beyond connectivity, writes Sifry, “we need a real digital public square, not one hosted by Facebook, shaped by Google, and snooped on by the National Security Agency. If we don’t build one, then any notion of democracy as ‘rule by the people’ will no longer be meaningful. We will be a nation of Big Data, by Big Email, for the powers that be."

What listeners say about The Big Disconnect