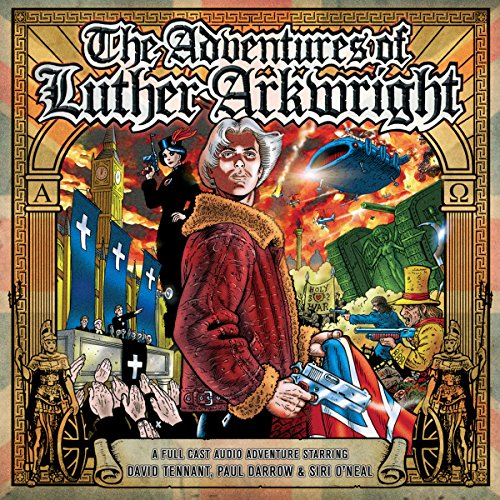 The Adventures of Luther Arkwright

Luther battles against the Disruptors in a parallel world where many things are familiar - but nothing is the same. The alternative England where Luther fights the Disruptors did not see the monarchy restored after the English Civil War and has been under the rule of the Puritan Parliamentarians for hundreds of years.

Led by a direct descendant of Oliver Cromwell, England is ripe for the taking by European superpowers that are preparing to invade. Many in England dream of past glories and an empire ruled by the long exiled Kings and Queens of England. A second civil war is brewing, its aim to bring Prince Charles to the throne, and Luther must help to ensure that the right side wins - not just for the sake of this world but for all worlds.

What listeners say about The Adventures of Luther Arkwright

This Buttered My Croissant

A good helping of Jerry Cornelius, a smidgeon of Oswald Bastable, a heaping tablespoon of European History, two cups of Esoteric Mysticism, and a lovely sprinkling of Science Fiction to top it all off and you've got yourself a delectable Luther Arkwright confection to tickle your palette.

Disclaimer: this is essentially after the fashion of classic radio dramas, which means that the composition of the piece follows the general structure of a modern graphic audio rendition sans the descriptive narrative voice. As such, I would recommend either A) reading the graphic novel first, or B) having the graphic novel handy while listening so that your mind's eye is supplied with visual representations to reference, as this particular production doesn't supply many aesthetic details.

Time Travelling to the max!

I must admit I downloaded this book due to the Mythras Supplement - Luther Arkwright. I didn't know what the supplement was about so I thought the best way to understand the concept would be to listen to a book.
Well, this is not actually a book per se. I was actually quite shocked at the start of the audiobook when my eyes were blasted by some strange cacophony of sounds. It soon became apparent that this was not going to be a narrated audiobook but more a radio drama.
The original adventures of Luther Arkwright were in a graphic novel and so this form of audiobook actually does suit the presentation of the original form. Personally, although I enjoyed the story and the characters, for me there were too many opportunities when there just appeared to be strange music and sounds blasting in my ears - I assume that they were synthesised, but the violin sounds were truly distracting and, well, awful.
Back to the story. To summarise, Luther Arkwright is a Vahalla Agent who is travelling through time and parallels to right wrongs which the Disruptor Agents are causing. There is a fair amount of history in the book, which I enjoyed, and it was interesting to see how things could have been different compared to the original time parallel. There are some nice flashbacks which allow the reader to gain some background into the Luther character and Rose (?) is engaging and interesting. I forget his name, but I really liked the cockney character - very funny. The overall storyline is good and I was engaged from beginning to end.