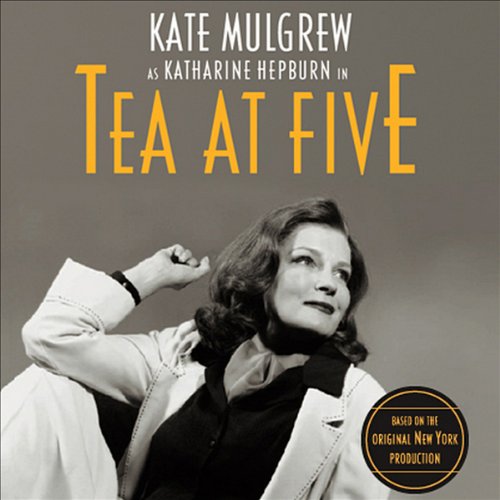 Joins us for a cup of tea, won't you? Katharine Hepburn beckons us into her Connecticut home for a cozy chat and an intimate look at the legend, and the woman behind the legend. Based on the critically acclaimed New York production, the independent, intelligent, feisty Hepburn comes alive once again when Kate Mulgrew, of Star Trek: Voyager fame, slips deftly into the voice and being of the famous actress.

The tale opens in 1938 when the 31-year-old Hepburn is five years beyond her first Oscar-winning successes. In the middle of a career slump after a series of movie flops, she waits by the phone to hear whether she nailed the part of Scarlett in a film called Gone With the Wind. The story moves to 1983, when Parkinson's disease has left her voice shaking, her hand clutching a cane, but her eyes still shining with intelligence, wit and the wisdom that informs a long life lived to the fullest. Tea at Five touches on Hepburn's turbulent childhood, her 15 year-old brother's suicide, and her 27-year affair with Spencer Tracy.

What listeners say about Tea at Five

Struggled a little with tge Katherine Hepburn accent in the 2nd chapter, the slighter older voice used by Kate Mulgrew grated on me a little to much.

On stage i imagine its an excellent piece of theatre but as an audio play it lacked substance.

I didn't have the joy of seeing "Tea At Five". However, experiencing it in this format is surreal. Being Southern, I love great storytellers. Kate Mulgrew steps aside and lets Ms. Hepburn have her say. It's the best 1 hour and 11 minutes you could ever spend having a story told to you in a way that makes you feel like you're living it with her. I highly recommend checking out Ms. Hepburn's memoir "Me". It's a wonderful companion to "Tea At Five". Beyond Five Stars!

First, let me say that Kate Mulgrew is absolutely fantastic as Katherine Hepburn. No better actress could have been found to embody the voice and character of Katherine Hepburn -- arguably one of the finest actresses of her generation and a true American icon. Secondly, I just love the whole conversational tone of this recording. You actually envision Kate Hepburn saying these things. This is a great recording for fans of either Kate.

This marks my first book purchased from audible.com. Needless to day I was very pleased. Kate Mulgrew is MIRACULOUS. Yes she does Hepburn's voice...yes she is consistent and believeable; but it is her delivery which leads you to believe you are sitting in the living room of Ms. Hepburn herself. Very enjoyable.

I can not remember when I have enjoyed a narrative more! Having been a lifelong Hepburn fan I was expecting the usual information. What a surprise! Kate does Kate very well and captured that famous spunk! The insights gleaned here make it much easier to understand why Miss Hepburn did what she did through her never a dull moment life.
Don't hesitate to get this one...it is one in a million!

One of the best.

Mulgrew Is Tops as Hepburn

Love Kate Mulgrew as Katharine Hepburn in Matthew Lombardo's THIN playlette. The pleasure is all in the performance, and Mulgrew IS a pleasure and MAKES this otherwise lean piece worthwhile.

What did you love best about Tea at Five?

To short, I wanted more.

What does Kate Mulgrew bring to the story that you wouldn’t experience if you just read the book?

Those damn Cattalillies are still blooming.

Just a really fun time listening to this play. Have heard it twice now.

Kate Mulgrew plays Katherine Hepburn to a T in Tea at Five in this sad angry look at the actress live in a short play/ audio book. Too bad they could have looked some of the many wonderful and positive things about the woman.

Kate Mulgrew does an outstanding job in this two act play ... Listening to it I believed Katharine Hepburn really was across from me having tea. Wonderful!

Well written and must have been hard work for the author to get such a big life into a short work.
All the high points of her life are hit and hit well. Kate Mulgrew makes you feel the really hard points in her life.

Really enjoyed this but unfortunately it ended really quick and I wanted more.