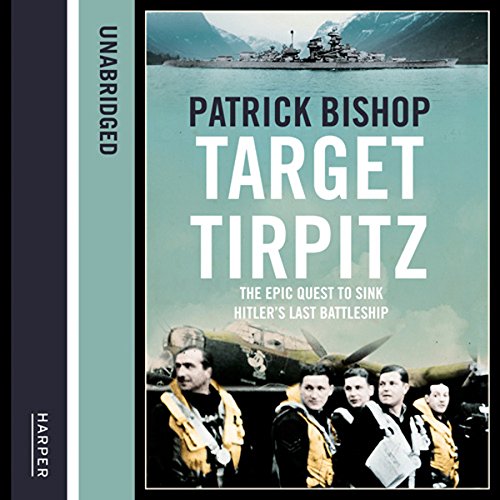 Target Tirpitz is gripping WW2 storytelling at its best and a return to the RAF territory of Patrick Bishop’s bestselling Bomber Boys and Fighter Boys. The Tirpitz, Hitler’s greatest weapon, was reputed to be unsinkable and the battleship inflamed an Allied obsession: to destroy her at any cost.

More than thirty daring operations were launched against the 52,000 ton monster. Royal Navy midget submarines carried out an attack of extraordinary skill and courage against her when she lay deep in a Norwegian fjord in an operation that won VCs for two participants. No permanent damage was done and the Fleet Air Arm was forced to launch full scale attacks through the summer of 1944 to try and finish her off.

But still the Tirpitz remained a significant threat to Allied operations. It was not until November 1944 that a brilliant operation by RAF Lancaster Bombers, under the command of one of Britain's greatest but least-known war heroes finally killed off Hitler’s last battleship.

Full of colour, insight and drama, Target Tirpitz is an un-put-down-able account of one of the great epics of the Second World War.

What listeners say about Target Tirpitz

One of the best written History audio books I have ever heard.

Pat Bishop is a master of Frontline history telling the events through the ordinary sailors and airmen involved in the Tirpitz saga, but Bishop goes beyond that by providing full context and analysis of the many strategic twists and turns of the story that makes this such a wonderful book.

I very highly recomend to anyone interested in the Second World War.

Wow, what a story.

Tells the story in much detail from both sides of the conflict. The narration is superb and very easy to listen to. The story flows well and paints tremendous visual pictures of the events. Highly recommended.

My personal family history tells of the real account of the events leading up to the sinking of this ship, this book has filled in many gaps of the account to which my family and I are erternally great full, amazing read, thanks to all involved.

Would you try another book written by Patrick Bishop or narrated by Richard Burnip?

I would try another Patrick Bishop book but not based on the performance of Richard Burnip. Sorry Richard your narration is shocking.

The historical background of all Patrick Bishop's books just goes to show how deep he will go into a story. Great first account story's from the men and women that were involved.

Would you be willing to try another one of Richard Burnip’s performances?

On this performance I would not want to hear the voice of Richard Burnip again. I have to say the narration is shocking and I cant even understand how the publisher could let this book be released in its current form. It does Patrick Bishop books no favours at all.

Was Target Tirpitz worth the listening time?

Yes a good listen but you can only take it slowly. One chapter a day was enough for me due to Richard Burnip.