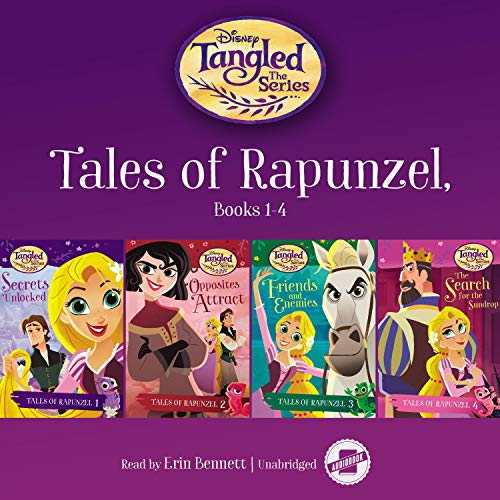 Disney Channel’s Tangled: The Series is set between the events of the original film and the start of Tangled Ever After. It follows the long-locked Rapunzel as she acquaints herself with her parents, her kingdom, and the people of Corona. Realizing there is much more she needs to learn before she can truly accept her royal destiny, Rapunzel puts her crown - and her marriage - on hold to seek out epic adventures, much to the dismay of her father, the king. Accompanying Rapunzel on her journey is the charming Eugene; the plucky chameleon sidekick, Pascal; the no-nonsense horse, Maximus; the Snuggly Duckling pub thugs; and newcomer Cassandra, a tough-as-nails handmaiden who becomes Rapunzel’s confidante. Two favorite episodes of Disney Channel’s hit show are retold in each chapter book collected here, making for a total of eight tales perfect for adventure-loving kids and Disney Princess fans.

What listeners say about Tales of Rapunzel, Books 1–4