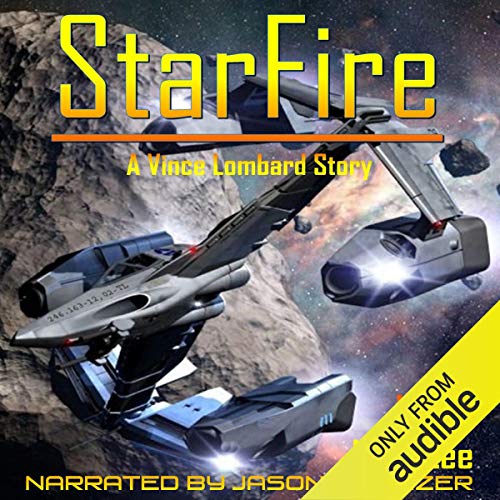 Captain Vince Lombard, G-Marine company commander, is tasked with tracking down a stray ship. The Alliance Military Ship StarFire has gone silent, and previous attempts to locate her have resulted in the loss of more ships. After two previous wars with xenospecies humanity bumped into while expanding into space, no one knows what might be the cause of StarFire's missing in action status. And internal politics between Fleet command and the Galactic Marine Corps might mean that, unless something is done, humanity may get the news it's at war with yet another new race about the time they show up to attack one of the human systems in the sector.

A prequel to the book Fey, this story is a novelization of the story Vince related to Blondie in the previous book, which many readers requested. I'm happy to accomodate my readers by providing this novel-length version of that story.

What listeners say about StarFire

The story moves along at a good pace. There's some action. There's some scheming. And some mystery with a little humor mixed in. It kept you trying to figure out what was going to happen next. I don't want to give away the story, so let's just say "If you play chess and like your action stories, you'll like this book." Also, there's no profanity in this story. It usually never adds anything to the story and I liked the fact I didn't have to wade through it in this book.

One of the Best Books I've Listened to on Audible

This was a great listen and I would highly recommend to anyone that likes military scifi, JAG or general scifi/mystery type books. It is probably in my top 5 of books from Audible (out of about 75 listened to so far). I liked the way the author approached the topics and kept it VERY interesting from the very beginning. Some of his thoughts and strategies on military action in space were also quite novel, not to mention thought provoking. Only disappointment is that the 2nd book in the series is not available at the time of this review.

If you could sum up StarFire in three words, what would they be?

What was one of the most memorable moments of StarFire?

There were so many, but Lombard is truly a great Officer and true leader of his troops. The ending was pretty unexpected - but rewarding.

What does Jason Brenizer bring to the story that you wouldn’t experience if you just read the book?

His ability to switch between the various "voices" enhanced the overall experience.

Let's get moving on turning more of Mike Lee's stories into audio books! Mike, start sleeping only every other night so you can write more books! That's an order.

This one is very good. Great characterizations and an interesting plot. It is told from the first person, but Lee does a good job changing time perspectives to make it interesting. As a lawyer, I was offended that the military lawyer in the inquiry was grossly unethical in his behaviors. Unfortunately, that happens too frequently in real life as well. Lee did a good job showing how power is corrupting. Other than that, this is a great listen. I recommend it with 5 stars across the board. More Vince Lombard stories to come, I hope.

What made the experience of listening to StarFire the most enjoyable?

This was an intriguing story. The story line was unpredictable and held my interest

Yes, but I would have had to miss work and angered my wife.

It's rare I feel compelled to write a review. This book though is an exception. I thoroughly enjoyed this and really look forward to the rest of the series.

Second and Third time through this

I re- listening to this book and will be also listening to FEY again as well. This author really knows how to tell a good story. You won't be disappointed if this type of material is your thing!

Where does StarFire rank among all the audiobooks you’ve listened to so far?

Let me say that lately I've have been disapointed in a large number of audio books but this one gripped me and would'nt let go. I was disapointed went it ended. I wanted more

What other book might you compare StarFire to and why?

Wow! Hard to put it down

The story is outstanding and well read. It's the first time I can remember being thankful that my morning commute was delayed by an hour, so I could continue listening to the story.

Wonderful story had a hard time putting it down. Wonderful writer just discovered Mike Lee recently really like his works. Jason Brenizer is very good too very enjoyable to listen to.

Mike Lee's StarFire is an excellent story about courage, leadership and resolve. Lee's character Vince Lombard, is an understated hero who doesn't aspire to glory, but achieves it in his unselfish acts of leadership and care for those serving with him. The story is full of surprises and left me looking forward to the next book in the Lombard series.

The narration is also excellent and the narrator well chosen to project the variously character's voices and demeanor. Overall one of the best listens in a long while.

I brought this book on a whim, not knowing the book or author, but am very glad that I did!

It is a very interesting premise and the structure works well, and you really get into the characters and events - I got quite emotional at the end! The structure of moving between the present (court of inquiry) and the events in flashback is often a recipe for disaster, but it is very deftly handled by Mr. Lee.

I usually like Jack Campbell and David Weber for my 'space opera', and this was similar but different enough to make it interesting. It does leave some big questions unanswered, but that's just making me look forward to the next installment.

A well written story with characters that you become involved with and narration that did it all justice.

Its been a while since a book made the hairs on my arms stand up. That possibly says it all.

Excellent work and the narrator was superb. Can't wait for future works by the author with this character involved. Brilliant.

I really enjoyed this story...

...but I want to know more about the Star Fire! Please please please release an audio version!!