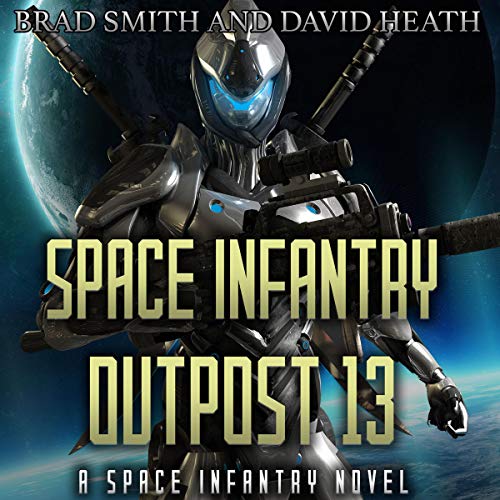 The Space Infantry are here! Conducting covert missions throughout the galaxy's frontiers, these elite units are humanity's greatest hope for its future survival. It is the 27th century, and humanity has reached out to the stars only to find itself surrounded by hostile alien races who work tirelessly to destroy what we have built. The United Planets Colonial Government dispatches these small teams of brave men and women to fight back against alien aggression.

Nick Smith is a member of one such squad, operating from a hidden starbase in the Outer Ranges. When a vital covert listening outpost goes suddenly dark, they are sent to investigate. What they find down on the alien planet are more profound mysteries that hint at a more mysterious conspiracy at work. The stakes are driven higher when two of his Space Infantry teammates go missing. As the awful secrets of Outpost 13 unfold, Nick and his group of roughnecks are up against the clock to complete their mission. They'll either do it - or die in the attempt!

Hayes scrambled along the rampart toward the southern perimeter of the compound. So far, everything was going well enough. That was until Smith heard the bone-chilling scream nearly short out the audio on his commlink.

He slapped the release on the three-point buckle that kept him secure to the seat. The straps around his body refused to slacken. Smith leaned over and wriggled one arm out of the harness just as a mutant shoved his head through the window. Another one appeared above it.

A long tendril shot out from of its mouth and wrapped around his leg. Smith stopped fighting the release button and found the autogun's trigger as his body was yanked toward the group of mutants. Baleful cries of hunger welled up from the creatures. Smith closed his eyes as a jagged claw tore at his flesh.

This was a light little story that fleshes out the game universe a bit with some named characters. I personally found the narrator's voice unpleasant, and noticed a few parts where an edit was missed and lines were repeated. Would still like to see another entry in the series if a different narrator can be found.

This Book give you a taste of what it's like to take part in your own stories while playing the solo game Space Infantry from Lock 'n Load Publishing. I enjoyed the story and wish it was a little longer. I highly recommend it.