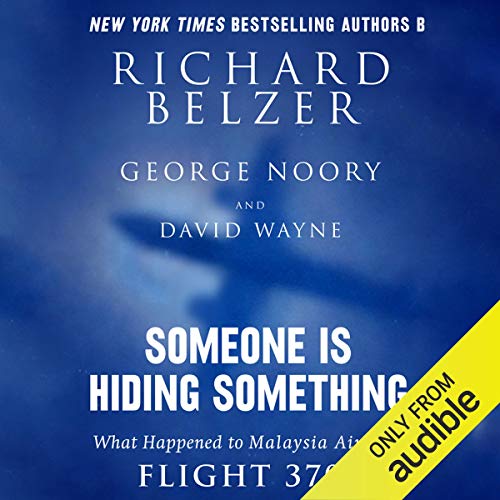 Someone Is Hiding Something

A year after the disappearance and commencement of the international search for Malaysia Airlines Flight 370, no sign of the plane has been found - no debris, no bodies, no sign of the much-talked-about black box. Richard Belzer, George Noory, and David Wayne want to know why.

Scrutinizing the theories the media and politicians claim are the "most likely" reasons the plane crashed, Belzer, Noory, and Wayne argue that if a year after a huge Boeing 777 has gone missing, and there's still no sign of it whatsoever, it's time to think outside the box. The public needs to stop being misled. If a plane and its passengers went "missing" once, what's to stop it from happening again?

Some of the theories the authors consider seem implausible on the surface, but the thorough research they've done and the continual failure of politicians, aviation authorities, and military members around the world to give any indication they're wrong makes their arguments as good - if not better - than the more widely shared ones. The title of this thought-provoking volume, Someone Is Hiding Something, is a line spoken by former Malaysian Prime Minister Mahathir Mohamad - perhaps the only government official to publicly acknowledge the true reason that neither Flight 370 nor the 239 people onboard have been found.

What listeners say about Someone Is Hiding Something

To be honest I didn't like the book because half half thought the book it started telling other flight stories which I didn't think there was no reason. I bought this to only hear about MH370 not what happen to other flights in the past

My opinion where the plane is? well in the book it says passager jim stone who was on the flight texts friends and family telling them that the plane was hijacked and he is at US Military Base in Diego Garcia be held hostage and other passagers GPS system located Jim's phone at Diego Garcia

The guy who reads it sounds constantly pissed off. The story is really dull. Sorry I love Richard Belzer but hate this book.

Very informative, I knew I would learn the truth!

Belzer always gets to the truth of the matter and in this book he did it again! I won't spoil it for you but it's as plain as the nose on your face what really happened to MH370 and who is behind it. The money I spent for this book was and is in my opinion worth every penny!

Nothing new about MH370. It is rehashing discredited conspiracy theories. As I finished listening to this, a part of what is believed to be MH370 have just been found washed ashore, I guess we are closer to knowing what happened and who is hiding what.

it was awesome. listened to it in one day. couldn't stop. the narrator was great and the subject was very interesting.

Review of “Someone is Hiding Something”

An excellent examination of the possibilities for the loss of Malaysia Airlines Flight 370. This book was so well documented that I am purchasing the book itself. One flight I felt this book should have referenced, more, was Flight TWA 800 1996 from JFK to Paris. It was eventually determined that it was accidentally shot down by a military exercise in the same area. I believe, after, all the evidence, our Military Complex was somehow involved. From 9/11’s advanced technology, we certainly, now, are capable of increased methods to “cloak” or whatever, to bring down a Boeing Jet Liner whether accidentally or for nefarious reasons. Unfortunately, we no longer trust our Government, enough, to believe any story they give us. We will have to wait for an honest “Whistleblower” or investigator. Fortunately, this book gives many believable platforms.

A lot of information packed in one book.

Belzer relays a ton of information with source information to back it up. What little of his opinion is added is done with a dry humor that I like. I don't agree much of his political view, but little of that gets into his books, and doesn't detract from his research.

a great start to a great mystery!

loved it. easy to follow and the narrator was wonderful! I learned so many interesting theories!

A little disappointed. It seemed to cover theory's that are not plausible. Liked the narrator a lot. I'm just waiting to see what the outcome is with all of this.

Written in an awful mix of comedic and quasi documentary styles this book rambles around a series of disconnected and unsubstantiated facts. It completely ignores the fact that Inmarsat tracked the flight by “handshakes “ for several hours only losing contact when the plane would have run out of fuel. They were able to calculate the likely course from this. So the books basic premise is.wrong from the start. I could not get past the first chapters. The narrator was good though.

This early hypothesis has been pursued again of late. Some interesting thoughts at the beginning.

I've read a few books about the mysterious disappearance of MH370, but this is by far the most detailed and comprehensive. A riveting read/listen that will get you to think again about what really happened to this plane.