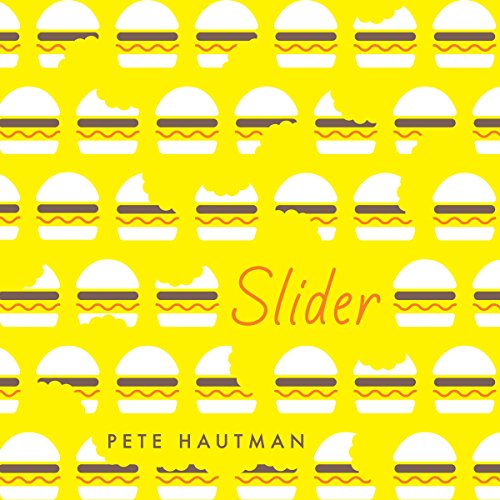 David can eat an entire sixteen-inch pepperoni pizza in four minutes and thirty-six seconds. Not bad. But he knows he can do better. In fact, he'll have to do better: he's going to compete in the Super Pigorino Bowl, the world's greatest pizza-eating contest, and he has to win it, because he borrowed his mom's credit card and accidentally put $2,000 on it. So he really needs that prize money. Like, yesterday. As if training to be a competitive eater weren't enough, he's also got to keep an eye on his little brother, Mal (who, if the family believed in labels, would be labeled autistic, but they don't, so they just label him Mal). And don't even get started on the new weirdness going on between his two best friends, Cyn and HeyMan. Master talent Pete Hautman has whipped up a rich narrative shot through with equal parts humor and tenderness, and the result is a middle-grade novel too delicious to put down.

fun for the whole family!

we thoroughly enjoyed this book! I'm 34 and my son is 9.. we both lsughed!

What made the experience of listening to Slider the most enjoyable?

The narrator brought the teenage voice out well of both the protagonist and his brother, the humour and pathos of the story were in the voices.

Both David and Mal, the competitive eater and his brother - David is an unusual character with unusual obsessions, his brother Mal hugely funny in his situation as well as empathic.

The eating competition scenes were great, but I liked the scenes with the brothers, especially when David works out some new techniques to allow Mal to interact more with the world around him. Very affecting.

An unlikely hero - a wanabee competitive eater - in a surprisingly funny and tender (in more than his stomach!) tale

David has an overachieving older sister and an autistic younger brother, he's the middle child and with eating his only real 'skill', he determines to make his mark in the world of overeating. Knowing the names, the training tips, the dates of the qualifiers, he begins preparing his body for battle...

With more than just the central premise going on - David has a couple of nicely written friends as 'sidekicks', he struggles to help his younger brother Mal fit into society, his attempt to buy a memento on the Internet goes horribly wrong... it's a busy little book!

His voice is clear - the reader (Audible copy) makes him just the right 'age' to listen to: a teenager's voice that is optimistic and slightly naive at times, but quite clearly becoming his own person. The other voices are well characterised by the same narrator.

I enjoyed the competitive eating scenes, and those with Mal especially, it seems as though research was done into how autistic children both talk and react to situations, and David's understanding of his brother is very sweet and very true.

Such a lovely conclusion to the story, made my eyes tear up a little.

A book about family, finding your place and knowing what you want. Perfect food for thought (pun intended) for readers aged 11 to 14.