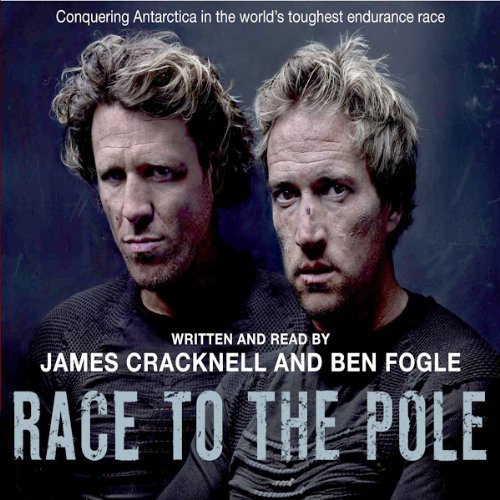 Race to the Pole

A very British adventure: the first race to the South Pole since Scott and Amundsen, 100 years ago

New Year's Day, 2009. Somewhere on the bottom of the world, six teams of adventurers and explorers have gathered to race one another, on foot, to the South Pole. It is the first time that anyone has undertaken such a race in almost a hundred years; the first time since the great Norwegian, Roald Amundsen, beat Captain Scott to the same goal in 1911.

The stakes are high, as double-Olympic Gold-winning medallist James Cracknell and TV presenter and adventurer Ben Fogle must contend with hidden crevasses, frostbite and the favourites to win: a team of teak-hard former soldiers from Norway, trained in Arctic warfare. Temperatures as low as minus 45 degrees Celsius lie in store for the teams as they attempt to ski across 800 kilometres of unforgiving, icy wilderness, pulling behind them sledges laden with equipment, tents and food.

Race to the Pole is a rip-roaring 'boy's own' adventure packed with excitement, humour and even a few tears. But with just a few months to learn to cross-country ski before the start, and with national pride at stake, can Ben and James re-write history and beat the Norwegians?

What listeners say about Race to the Pole

You feel as if you were there with them

Just when I thought this was a cool recollection of a crazy challenge but I wouldn't take away much, James and Ben started dropping wisdom left right and center. What an incredible journey. James' part was strong. A dream team. Can't wait to watch the documentary and hopefully hear and see Ed in action too.

Where does Race to the Pole rank among all the audiobooks you’ve listened to so far?

Overall I enjoyed the book and could not wait to undertake my evening commute to sit and listen to the continuing saga. I would put this in the top 25% of my audio book collection.

The quality of the details of the continuing saga of their adventure.

Ben Foggel has easy vocal delivery and you really feel he could be sat next to you in the pub but I did find James's delivery somewhat stilted in comparison as if he could only recount the tale in short sharp bursts.

The end was incredibly emotional after they realised the enormity of what they had achieved.

Although neither Ben Fogal or James Cracknell are authors or journalists, this book flows along and keeps you hooked due to the sheer misery that they had to endure and their desire to continue at all costs.

A Must Read / Listen

What a compelling listen

Loved it and felt like I lived it with the guys.

Extreme fatigue, rotting flesh, pneumonia, mood swings, frostbite and talking poo !!! Are to name but a few of the daily challenges faced by the guys. I like many others will never get the chance to experience the places these guys have been or what they have achieved, but listening to this book has made me realise the reason why .... We are not all made of the right stuff..... I wish I was, but this listen has given me the chance to put in my head phones and totally immerse myself in their race, and understand about a place I will never go. Thank you ..... AND Thank you also for explaining Sublimation ..... having been to Iceland in winter and experiencing no frost on my car windscreen ( how come ??? ) I can now explain it to people with a big smile and say “ I learnt that from James Cracknell) ( IF YOU DONT KNOW It’s the conversion between the solid and the gaseous phases of matter, with no intermediate liquid stage. For those of us interested in the water cycle, sublimation is most often used to describe the process of snow and ice changing into water vapor in the air without first melting into water). Thanks James 👍

I heard 2/3rds of a truly epic human endeavour. where was Ed's story, this would have completed the tale.

Excellent book. Brilliant performance by Ben and James, pushing themselves to the absolute limits. One of the best books I've had.

Brilliant detailed account from the 2 lads ... had previously enjoyed the Crossing account of their Atlantic row ... but this account was even better ...Ben is a natural and highly skilled story teller, however James Cracknell take a bow - brilliant told story by the Olympian with some witty quips to break up the amazing achievement in the harsh conditions of the South Pole. Chapeau

I watched the show when it was out, I don't think it gave me any insight listening, but I enjoyed it and rattled though it, so just have been a good listen.

loved every minute of it...

absolutely fantastic to listen... great story,great achievement... Many thanks for this. Hope to hear more adventure from you..

Great book. Loved the duel delivery it gave different perspectives to the same journey. Very inspirational - taking on this challenge with little experience makes you believe anything is possible

another amazing book from Ben. however I very much missed hearing anything from the 3rd competitor, ed.