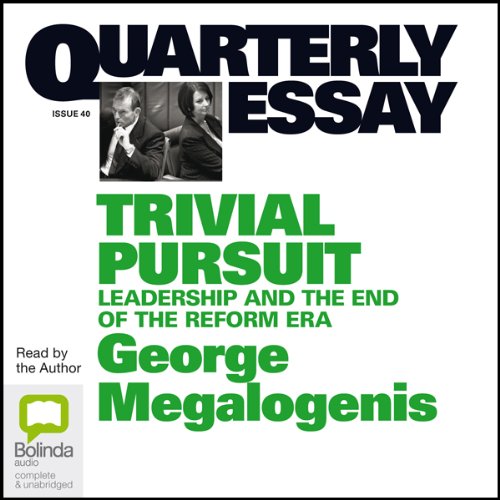 In the aftermath of the 2010 election, George Megalogenis considers what has happened to politics in Australia. Have we entered a new phase with minority government and the rise of the Greens and independents?

The Hawke, Keating and Howard years were ones of bold reform; recently we have seen an era of power without purpose. But why? Is it down to powerful lobbies, or the media, or a failure of leadership, or all of the above? And whatever the case, how will hard decisions be taken for the future?

In a brilliant analysis, Megalogenis dissects the cycle of polls, focus groups and presidential politics and explores what it has done to the prospect of serious, difficult reform and the style of our leaders. He argues that politics-as-usual has become a self-defeating game and mounts a persuasive case for a different model of leadership.

A really sound discussion of issues in Australian politics that I suspect translate to other Western nations too, whereby politicians no longer truly stand for anything; instead of steadfast policy making, they are reactive, addicted to the fortnightly polls and news media cycle. Megalogenis discusses the problem the major parties face in attracting Gen Y voters while still catering to the hip pocket of the Boomers and offers (still all too relevant at the time of writing this review) insight into the fascinating and depressing leadership wrangles between Rudd and Gillard. Megalogenis reads the essay himself and it's not slick, but he has a great voice and this was anything but dry.