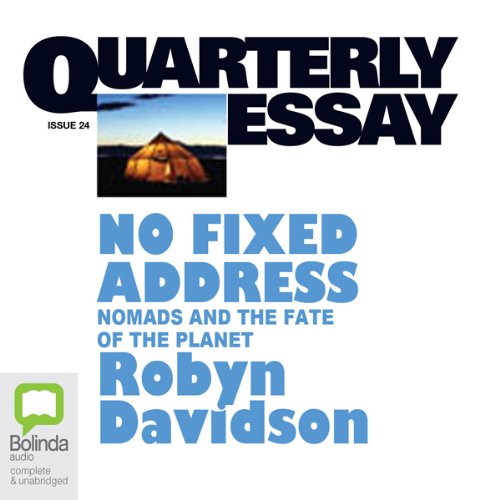 After many thousands of years, the nomads are disappearing, swept away by modernity. Robyn Davidson has spent a good part of her life with nomadic cultures - in Australia, northwest India, Tibet and the Indian Himalayas - and she herself calls three countries home. In the last Quarterly Essay for 2006, she draws on her unique experience to delineate a vanishing way of life.

In a time of environmental peril, Davidson argues that the nomadic way with nature offers valuable lessons. Cosmologies such as the Aboriginal Dreaming encode irreplaceable knowledge of the natural world, and nomadic cultures emphasise qualities of tolerance, adaptability, and human interconnectedness. She also explores a notable paradox: That even as classical nomadism is disappearing, hypermobility has become the hallmark of modern life. For the privileged, there is an almost unrestricted freedom of movement and an ever-growing culture of transience and virtuality. "No Fixed Address" is a fascinating and moving essay, part lament, part evocation, and part exhilarating speculative journey.

What listeners say about Quarterly Essay 24: No Fixed Address