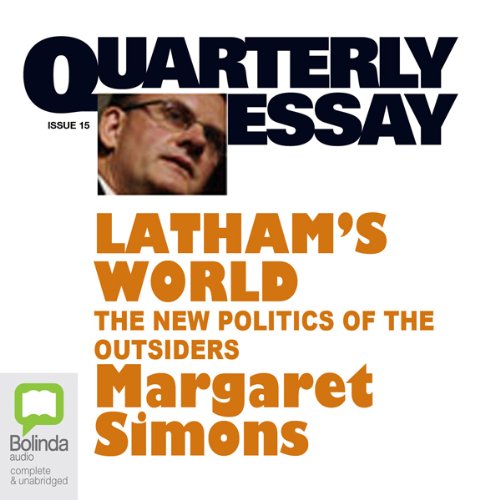 In the third Quarterly Essay of 2004, Margaret Simons takes a long hard look at Mark Latham, the self-proclaimed "club buster" and the man who would be prime minister. Few doubt Latham's intelligence and ambition, but what will this amount to in government?

Simons argues that if Labor is elected, it will not be "business as usual". Rather we can expect a reformist government in the spirit - if not the letter - of Latham's political tutor, Gough Whitlam. It is also likely to be a government that has little time for the totemic issues of the Labor elites.

This is an essay that takes the political pulse of the nation - it is clear-eyed, probing, anchored in observation and an original analysis of the political state of play. It ventures into the murky world of Liverpool Council, where Latham made enemies and ran the show. It reserves harsh words for those in the media who have ignored Latham's ideas and community campaigning in favour of rumour-mongering. Above all, it reveals Latham as a conviction politician and an acute thinker, with a prescient understanding of how the urban fringe now drives the politics of the nation.

What listeners say about Quarterly Essay 15