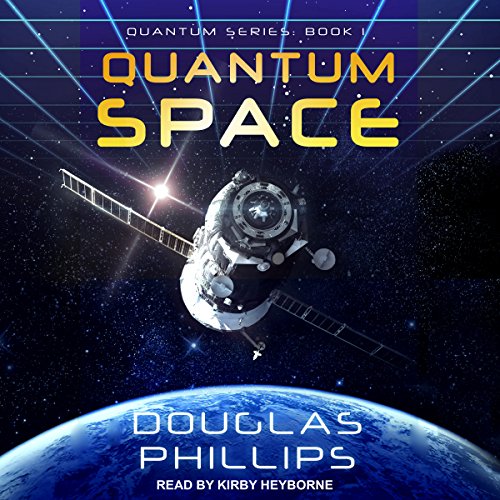 High above the windswept plains of Kazakhstan, three astronauts on board a Russian Soyuz capsule begin their reentry. A strange shimmer in the atmosphere, a blinding flash of light, and the capsule vanishes in a blink as though it never existed.

On the ground, evidence points to a catastrophic failure, but a communications facility halfway around the world picks up a transmission that could be one of the astronauts. Tragedy averted, or merely delayed? A classified government project on the cutting edge of particle physics holds the clues, and with lives on the line, there is little time to waste.

Daniel Rice is a government science investigator. Marie Kendrick is a NASA operations analyst. Together, they must track down the cause of the most bizarre event in the history of human spaceflight. They draw on scientific strengths as they plunge into the strange world of quantum physics, with impacts not only to the missing astronauts, but to the entire human race.

Very good! I loved it!

I liked it but the story was a little slow and took awhile to get going. Narration could of been better. Will try the next one.

Intrepid male investigator - see any Dan Brown novel - works with a variety of empowered women to investigate a mystery. Unlike Dan Brown novels, no traipsing about interesting European locales; takes place mostly in lab or office settings. Provides many long tutorials on quantum physics, string theory and the author's own fantasy physics. Through sheer cleverness, world-changing information is revealed. Becomes more improbable with each passing chapter. Dialog is often cringe-worthy. Narrator's at-all-times breathless rendition is wearying. Was interested at first but began wishing it would just end.

"The Martian" is a procedural book about engineering -- set in the near future. It is fairly "hard" engineering. Not a lot of extras. Quantum Space is similar, it is a definitely "hard" nuclear physics story set in the very near future. I enjoyed it greatly -- and the somewhat reserved nature of the narration added to the overall effect of being a fly on the wall as scientists think about a problem. Based on the author's comments at the end, the physics are fair in the sense that although it is an imagined extrapolation, up to the point it departs from the present understanding, it is correct. He also states that it will be part of a series -- which is good.

Story started a bit slow for my taste and the writing felt like a first novel in the first 3rd of the book...but the author found his groove and delivered a solidly enjoyable science fiction tale. I felt the fiction departed too much from a proper interpretation of the science and mathmatics it was built on. for example, I don't think that you would be remotely recognizable looking at yourself from a 4th dimensionional perspective. My gut (pardon the pun) tells me that viewing the entirety of yourself would be more incomprehensible than this. In any case I enjoyed the story and felt it was a credit well spent.

This book gives a good explanation of the Standard model in particle physics.
In the afterward it explains what is fact and what is fiction.
The premise for interstellar travel is as good as warp drives or worm holes.
Excellent science fiction.
I will read the sequels.
Note: I have a masters degree in physics.

I always finish a book but this was hard to handle.

Great book - Got me thinking

What did you love best about Quantum Space?

Good solid premise and I liked the characters.

What other book might you compare Quantum Space to and why?

What does Kirby Heyborne bring to the story that you wouldn’t experience if you just read the book?

He is a good narrator. Was about the story, not him.

Solid book. Hoping for the 2nd on Audible soon.

Lots of great real science background in this one, and with just a bit of science technobabble on top to stretch concept into the real of fiction. The author takes the time at the end to detail which bits are made up nonsense and which bits are accepted science.

The writing is solid, and in fact I appreciated a few places were some standard plot tropes were avoided. If those common paths had been taken -- and there were obvious places to put them -- it would have been a lesser book.

The narration was okay but not great. It wasn't annoying in any way, but the voices weren't really very different from on another and the tone was a little dry. It didn't get in the way of the story, but it did make it a bit easier for the mind to wander and lose track.

New Way to Travel to the Stars

I liked this book. It has a fresh view of the possibilities of travel in a new dimension. The science may be a little off for the nit pickers but who cares when there is a little stretch. I doubt the Borg are out there but I enjoyed that story also. The narration was good and the characters were well developed and you care about them . Great eleven hours spent! Thank you Mr. Phillips

Learned a lot about Quantum physics :-)

Good storyline, loved the believable realism. Fiction mixed with reality does it for me. Will definitely read more books from Philips.

I love stories based on real science, so does my wife.
We listened to this book together and enjoyed it all.
My wife also liked the fact that at the end of the book, the author explained the real science behind the novel.