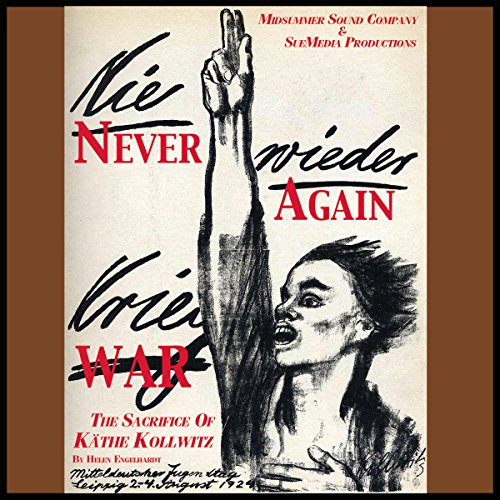 Begun as a stage play by Engelhardt, this audio adaptation of Never Again War focuses on key biographical moments in Kollwitz's long life to give the audience an understanding of the complex world in which she lived and the destructive nature of war. Engelhardt is now working on a feature film to further bring awareness of Kollwitz's story to a larger audience.

Hosted by Marsha Mason, Oscar nominee and Golden Globe winner, Never Again War takes us into the mind and life of the great German graphic artist and sculptor, Käthe Kollwitz, renowned for her body of work dedicated to depicting the lives of the working poor.

After her youngest son Peter was killed in Belgium in October 1914 during the opening weeks of World War I, she devoted the rest of her life to using her art in the service of her grief and opposition to war.

Our play begins in Berlin in February 1914, at a party in the Kollwitz home celebrating the 18th birthday of her younger son Peter. A few months later, as soon as war begins, Peter implores his parents for permission to join his older brother Hans to become a soldier in the army.

To support the idealism of her sons to offer themselves for sacrifice on behalf of the Fatherland, the socialist Käthe finds herself supporting her sons in a war she deeply disapproved of. When the play concludes in Moritzburg, two weeks before Germany's defeat at the end of World War II in 1945, Kollwitz has learned that every war is answered by a new war until everything is smashed because every war already carries within it the war that will answer it, as World War II answered World War I.

Special thanks: The staff of the Käthe Kollwitz Museum Köln