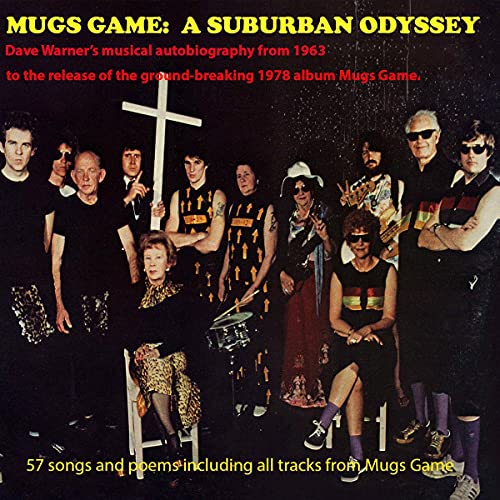 A mix of narrative, music, poems, reflections, and historic interviews narrated by me about all the influences that led to the ultimate recording of my 1978 album Mugs Game.

I grew up in the 1960s in Perth, Western Australia, the most isolated city in the world, yet harboured the dream of playing rock music like The Who, The Beatles, or The Doors. Garage bands progressed to songs: some introspective about my life as an adolescent in a sea of Laminex, some angry, satirical rock inspired by Frank Zappa and the Fugs. In the late 1960s original Australian music was almost unheard of. What there was tended to be a faithful recreation of American or English pop music, and nobody sang in an Australian accent. I knew that the most powerful art, including rock music, needed veracity and that presented me with an awful dilemma: If I was to write truly original, powerful songs, I would have to make them about my boring, unfashionable, Australian middle-class life. In 1972, I formed probably Australia’s first punk band, Pus. After a stint in London I refined the concept of my music into what I called "suburban rock." This culminated in Mugs Game (Mushroom). It went gold in three months, but its genesis was way back in 1963, and it evolved steadily along the way as my life was influenced by friends, fellow musicians and constant romantic rejection.

This 4.5 hour-long audiobook is the story of my life from 1963-78, told with assistance of 57 songs and poems, including all Mugs Game tracks in full plus earlier demos, and other songs of that time never before recorded.

My life-long friends and fellow Suburbs Tony Durant and John Dennison talk about the early days and the evolution of the band and Mugs Game.

In some ways, I think my story is the story of every musician who went on to form a band and write and record an album. But it is of course, uniquely mine too - the Suburban Boy trapped in the Mugs Game. A true suburban odyssey.

What listeners say about Mugs Game: A Suburban Odyssey

We are all MUGS!

Oh! how wonderful it is to remember Perth in the seventies. A true performer. Narration interspersed with his songs. Suburban Soldiers march on. Hopefully Dave will continue with this audio treat if his life after MUGS Game.